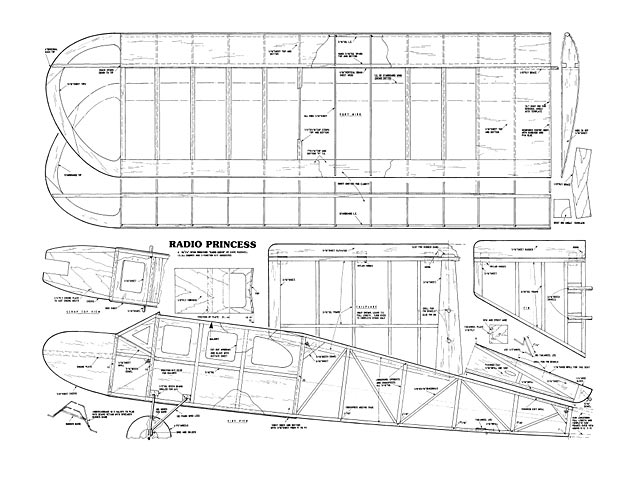 The original ED Radio Queen (oz5471) designed by Colonel Taplin, was 84 in span and used an ED 3.46. It was flown in many radio competitions throughout the fifties with reasonable success with numerous different engines. It was the first model aircraft to fly across the English channel in the early fifties and the design has always appealed to me from when I started modelling some thirty years ago.

About seven years ago I was fortunate enough to be given a half-built kit complete with original plan from which I have built many 'Radio Queens'. Being very docile, the model became popular as a large first model for beginners. To ring the changes a bit I thought I would scale down the plan to a more transportable size (56 in span). 'Radio Princess' is the result, built around the engines I had lying about my workshop eg. PAW 1.49, Mills 1.3, OS 10, OS 15 - all these engines are suitable power plants. The model can be built for up to three channel radio (I even have one free-flight powered by an old Amco .87).

Fuselage. Cover the plan with polythene to prevent glue sticking to the paper. Pin down fuselage sides using 3/16 in square hard balsa; pick your longerons carefully to prevent ending up with a banana fuselage. Fit 3/16 in sq uprights and 3/16 in x 1/8 in diagonals then add the gussets and 3/16 in sheet tailplane seat.

Sheet the fuselage sides and bottom from F1 to F3; do not forget to cut out the windows. Fit hardwood block for the undercarriage and epoxy in place. Fit the wing dowels (but do not glue). Fit the tailwheel leg and epoxy to ply plate. Now mark and drill holes in the hardwood ilk blocks to accept 12 swg piano legs. Epoxy engine plate (ply) to F1 with 1° downtbrust, then epoxy cheeks to F1 and engine plate. When sanded, fit the windows from the inside.."

A few days ago, I promised to scan the Radio Princess plan on my little A4 printer. Well, here it is. Plus a photo of my Radio Princess, flown 2-channel with a very early PAW 1.49, a long time ago [model photo].

Item # 1: Article pages, text and pics, thanks to RFJ. Item # 2: Modern re-drawn plan in PDFvector format, thanks to Hogal. Quote: - "Radio Princess. CAD tracing of Princess on 36in paper. I built one when it was first published in 1988, and powered with old OS Max 15. It flew really well on tick over, my brother and I would park it a great height and just let is stooge around with just the occasional radio input. I might even build one for electric. Normal measure twice, cut once applies if building from this tracing." 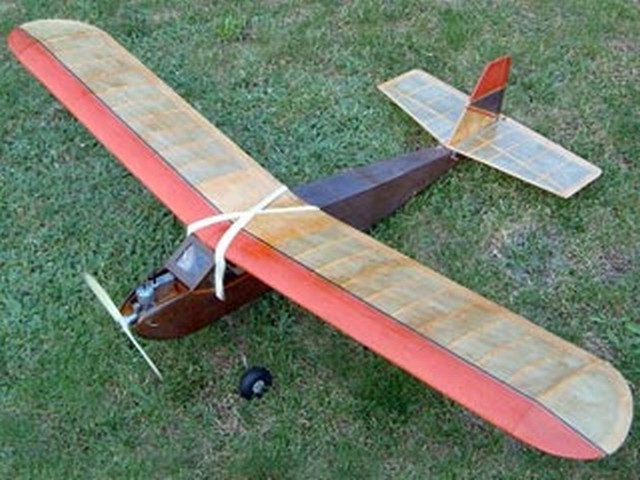