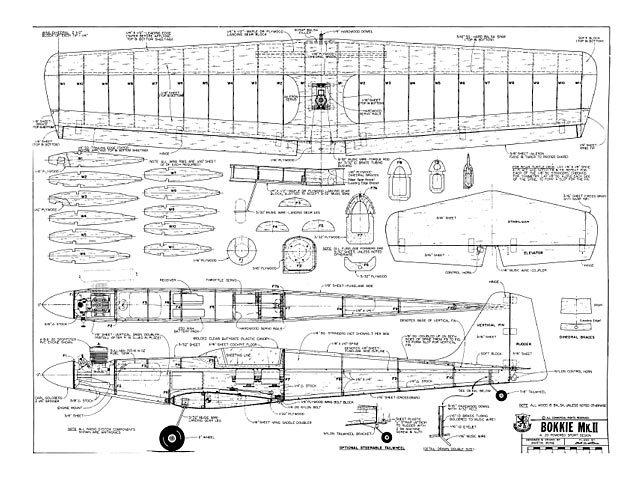 This is a later re-working of the H Allan Bokkie (oz2268) design, originally published in RCM February 1971.

Quote: "I think that most modellers would like to design their own aircraft. There is real satisfaction in seeing something unique flying for the first time, especially if it is your own and not just a run of the mill kit or plan that dozens of others have built. Most of us have a good idea of what we would want such a model to do, based upon others we have flown, but only a few have the confidence to start on a new design. For the rest of us there is an alternative; we can start with a good airplane and go from there.

Redesigning an already successful airplane offers many people a fairly safe way to end up with something that can stand out, from the crowd but still be a sure flier. The following is just one example of what can be done. I have gone into more detail than is strictly necessary so that anyone considering a similar project can follow the rationale for the changes I made, and hopefully meet with as much success as I did. The basic aircraft is quite simple and the plan complete, and, therefore, needs little explanation, at least to those who should attempt it. If you are an 'ARF' pilot. then perhaps you can get some help from another modeller!

Construction. Wing: I force myself to build the wings first so I have them to set the wing saddle cut-out in the fuselage later. This is a fairly straightforward wing and the tapering platform is easier and less work than many people think. There are a few changes from the original drawing. The first one is the substitution of a 1/4 x 1/2 in leading edge, bevelled after it is installed, but before the leading edge sheeting is glued on. This way the leading edge and the sheeting are tied together and so are stronger. I also feel that it is easier to get a reasonably accurate leading edge shape this way and it all but eliminates the possible joint gap. I added small 1/16 plywood landing gear doublers to W1 and W3 to help take my less than perfect smash and go's, and wrote myself a note to add the 1/32 plywood wing bolt reinforcement after covering so that I wouldn't have to cover around it. This ply piece looks larger than is necessary but it ties the trailing edge together quite well at this point.

The ailerons were widened from a constant 1 in to 1-3/16 in from the base at W2 to W8, where they taper to the tip at W11. This was for appearance and to make sure that I had enough aileron for quick controls. The last thing that I did was to extend the tips back so as to enclose the ends of the ailerons. There isn't enough wing outboard of the aileron ends for this to be of aerodynamic benefit, but it avoids catching things in the hinge line at the
tips. My wing tips were made of 1/8 in sheet for the outline and a bit of block. It is a little lighter than solid block. The plane should also roll better with less tip mass although I doubt that it is significant.

I included 1/16 shear webbing (vertical grain between the spars) even if not strictly necessary. Subsequent flying with and without webbing (two wings) has shown this to be true, but if you want more strength for negligible weight, include the webbing from the centre section out to W8 (web between the spars, with the grain vertical). This would be a particularly good idea if a Schnuerle ported .25 is going to be used.

Tail: The tail is pretty much as was originally designed by Harry Allen, but I used crossgrain stabilizer tips to minimize warping, and I extended the trailing edge of the rudder and elevator for a little more response. This was a modification that we felt was beneficial. I built the tail skid shown on the original plan on the first aircraft I made but took it off after trying it and finding it hard on the rudder hinges. I replaced it with a swivelling tail wheel mounted in the fuselage. The method shown (using a drilled out dowel as a mount) seems to work very well..."

Article pages, text and pics, thanks to GaetanPage. 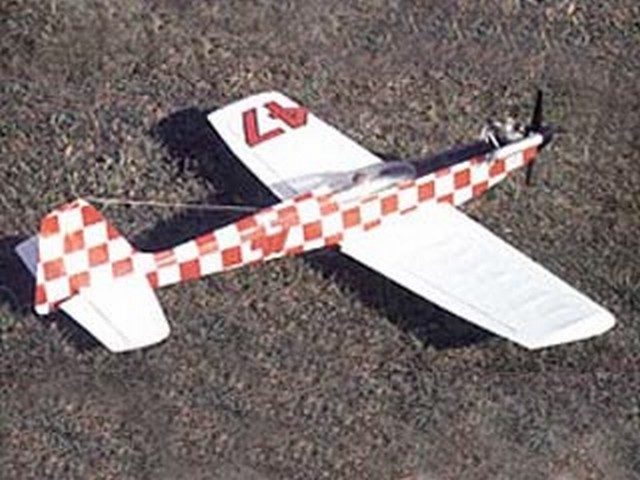