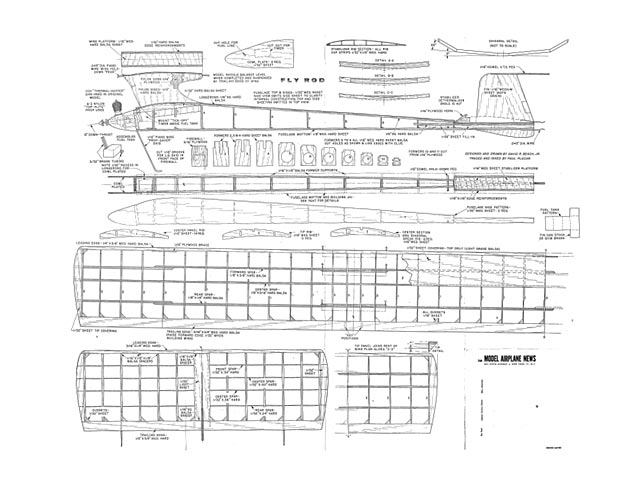 Quote: "
Improbable as it may seem this National record holder mentally conceived while fly fishing trout stream in No. California...

Bending a nine foot Fly-rod across a small Northern California stream in search of the ever wary trout, stirred up the naming of the new design that had been laying untouched on my workbench back in '53. My ideas, coupled with those other serious free flight designers, had slowly been losing ground to the trout. A new spark of interest arose as I lashed that long moment back and forth across the stream. The 'Fly-rod' was born. The original, a big clumsy bulkhead stringer affair, looked sad. However, performance was great.

Modern design immediately took over and the rest was a succession of wins that renewed all interest in the design. All sizes were made and flown with great success, includ-ing the FAI, Pay Load and even a 1/4A job.

The original 1/2A was 185 square inches and was a winner with tame 1/2A engines but an uncontrolled bomb with the hotter mills. The size was increased to 215 square inches and a real performer developed. It would handle the hottest of mills as slid its bigger "brothers".

At the height of the Fly-rod's glory in 1959 came the rule changes. These cramped the free lighter's style. The new rules had a marked effect on performance of the Fly-rod but not its ability to win. My good friend, Danny Garabrant, set a new record in class B of 25 minutes then broke his own record with a 36 minutes win which still stands.

The 1/2A suffered the most because of the high wing loading imposed by the new rules. Thus came the 295 square inch version, which we have here. Weighing out at four to six ounces per square foot pins this ship in the floater class. The increase in size has little effect on its climb pattern and VTO is still there and fast.

Fuselage: Lay out two fuselage sides on 1/32in sheet balsa. Front curved areas can be easily reproduced by tracing outline thru clear plastic or acetate sheet. Cut out and use as template. Balance of layout is straight lines. When finished, lay aside. Cut out firewall and fuselage formers. Lay out center lines in formers. Pay particular attention to accurate measurement of all formers to assure proper alignment..." 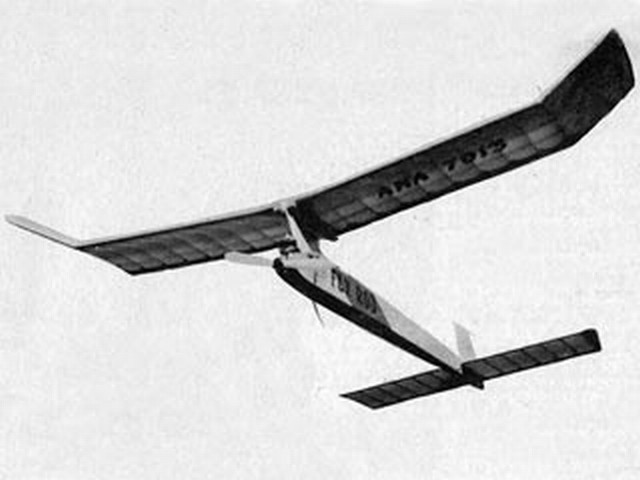