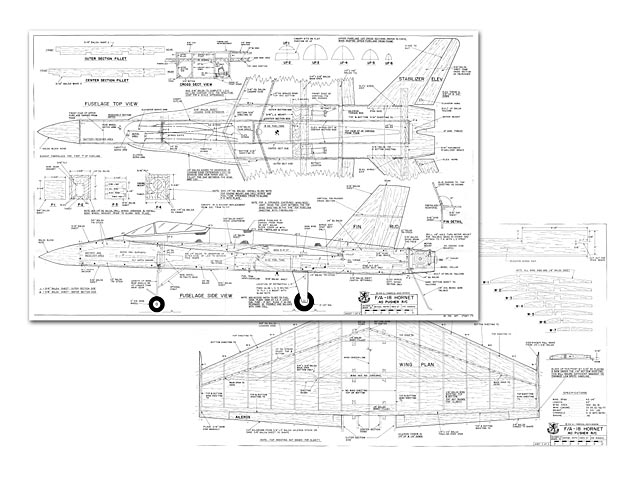 Quote: "This sport scale version of the F/A-18 Hornet is an easy to build, and easy to fly aircraft that looks great on the ground and in the air. Using a rear mounted .40 size engine and pusher prop, it provides realistic jet flight without the expense and hassle of a ducted fan. The aircraft's light wing loading, flat bottom airfoil, wing tip washout, and overall design enable it to fly and land very slowly yet it has impressive high speed performance and maneuverability.

Any good .40 size engine will fly this aircraft well. The prototype had an O.S. .40 FP (not a particularly powerful engine) and 10 x 6 pusher prop, and routinely took off from an upward sloping grass field in less than 100 feet. A hotter engine obviously yields better take-off and high speed performance.

Use of a fuel pump is recommended; however, this aircraft could be flown without a fuel pump by installing the fuel tank as rearward as possible in the center section (the prototype was flown like this and performed well). In this configuration, extra nose weight is required to balance the aircraft (balance with the tank full), and some elevator trim adjustment is needed during flight to compensate for fuel burn. If you have a fuel pump, install the tank at the Center of Gravity. Less nose weight will be required, fewer trim adjustments will be necessary and the engine fuel mixture will remain constant during the flight.

For added scale realism, use of retractable landing gear is also recommended.

Now let's get started. General: Read all instructions and review both plan sheets carefully before starting construction. Plan your radio installation and fuel tank location prior to cutting out holes and slots for NyRod exits. The plan shows one servo/NyRod configuration that works well with a mid-mounted tank. Instant glues can be used, but epoxy is recommended for joints where extra strength is required (especially plywood bulkheads F2 and F4, and the landing gear mounts).

The fuselage is built directly over the top view plan on sheet No1. It is a good idea to protect the plan by covering it with wax paper or equivalent. Cut out the main landing gear mount from 3/16 plywood and install blind nuts so that aluminum gear can be bolted into position later (this step is not required if retracts are used). 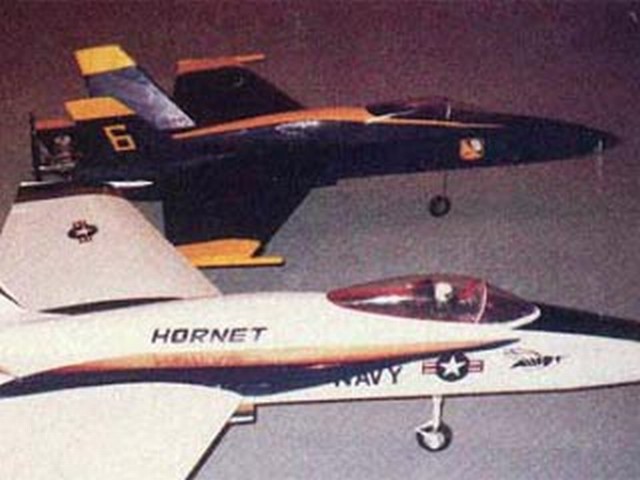