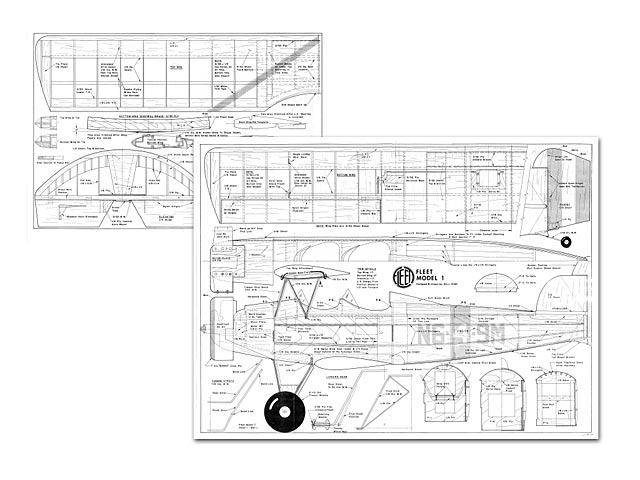 Quote: "Radio-control scale at its very best. Exciting looks, exciting performance, adaptable and best of all, easy to build and even easier to fly. Fleet Bipe, by Bill King.

My first encounter with this unusual Fleet biplane occurred while I was attending an airshow in 1962. Among the many antiques and homebuilt planes that flew in that day, this one was a standout. Exactly what it was, I didn't know, but it was obvious that this was a plane perfect for modeling. The color scheme was true to Navy fighter planes of the thirties.

Once the crowd had thinned out, my wife turned on the high powered charm and a guard let her through the gate to get some close-up color slides. Although I didn't know it at the time, these were to become an important part of my scale presentation. I later learned that the plane was owned by Dr Richard Coughlin, a Syracuse New York, dentist. Dr Coughlin was very helpful in supplying additional details about his ship, and sent along a number of photos which were a real timesaver when building time came around. It turned out that the plane was a Fleet Model 1 which was finished to simulate a Navy N2Y, one of several planes designed to be carried aboard the airships MACON and AKRON. Major departures from the actual N2Y's is the ring cowl and the lack of the airship hookup gear on the top wing. Although this model looks like, and acts like, a Navy N2Y, it is not. Except for the minor deviations noted later, it is an exact scale model of Dr Coughlin's Fleet Model 1.

The next step was to dig into the background of the Fleet planes. The Fleet Model 1 was granted ATC #122 in May, 1929. It was a product of Fleet Aircraft, Inc., a division of Consolidated Aircraft Corp. in Buffalo, NY. Named for Major Ruben Fleet, this popular biplane was a direct development of the earlier Consolidated PT service-trainer series. Under Consolidated's president, Lawrence D Bell, later to gain greater fame as founder of Bell Aircraft, production of the Model 1 reached two per day. Some instability was found in the earliest models, but changes in the area of the fin and rudder cured the problem. Originally built with a 110 hp Warner Scarab, some models were fitted with the Kinner K5 100 hp engine and designated Model 2 (ATC #131). Model 10, another variant powered by the DH Gypsy Major, was designed primarily for overseas buyers. Model 8 had a wide fuselage designed to accommodate three people. With production rolling, and popularity growing, a Fleet manufacturing facility was established at Fort Erie, Ontario, Canada, and produced a winterized version with an enclosed cockpit. This feature appeared on many RCAF Fleet Fawns and Canadian civilian Fleet Finches.

One of the early claims to fame of this rugged bipe was a record of 46 consecutive outside loops set by the late Paul Mantz in 1930. Actually Mantz completed 49 loops, but the judges (probably ancestors of some R/C judges) claimed he lost heading on three loops and refused to allow them.

The US Navy purchased six Fleets for operational use as hook-on aircraft aboard airships. It was a Fleet piloted by Lt D Ward Harrigan which completed the first night hookup aboard the airship Los Angeles. The feat was accomplished on September 29, 1931 with crew members holding flashlights to show Harrigan where he was! Harrigan's plane did not even have navigation lights, so he was equipped with a flashlight, too! The N2Y's were later replaced by Curtiss F9Cs, but the early successes of the Fleet's encouraged the Navy to continue until the airships themselves met disaster.

With this kind of background I was convinced I had to build one! But plans weren't readily available, it was already January, 1965 and I wanted to enter it in the 1965 Nats. Panic! A visit to the MAN offices solved the problem. Walt Schroder came up with a set of Nye drawings which had appeared in the December, 1935 issue of Model Airplane News. These drawings proved to be ideal for scaling to 2-1/4 in = 1 ft and after checking out a few discrepancies with Dr Coughlin, I was ready to go. If you are the owner of the original plans, the chord should be 45 in instead of the 48 in shown, and there should be 12 ribs instead of 13 in each bottom wing panel.

The first step was to make a scale by laying a strip of masking tape over the numerals of an 18 in ruler, leaving the graduations on the ruler's edge exposed. The masking tape was then marked off every 3/16 in, which now equals one inch on the full size aircraft. Thus, the dimensions shown on the plans can be measured directly on the model with the ruler. This scale ruler is excellent to give judges so they may verify the model's dimensions.

Let's look at some of the features of the model Fleet. Both wings use the same constant chord and have a simple tip shape. This means you have only one basic rib remplate to contend with. The ailerons are in the lower wing only, simplifying linkage and adjustment..." 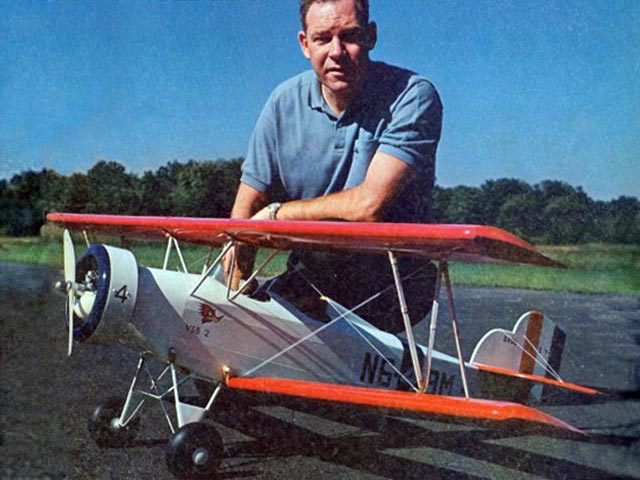