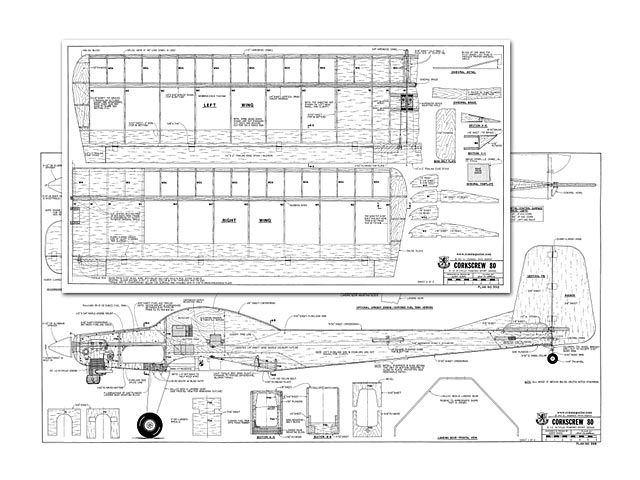 The Corkscrew (oz5750) first appeared in RCM in January 1983. It was designed by Stu Richmond and endorsed by Don Lowe. Its looks really do nothing to tip you off that this is one hell of an airplane. Its performance with a hot engine (mine is powered by 0.S .28FSR) is truly spectacular. The things you can do with this plane, that would tear another plane apart in the air, are truly amazing. Added to this, with the trainer-like take-offs and landings, the very low cost to build and to operate, you would be doing yourself and your budget a favor by building one.

I'm on my fourth Corkscrew. No, I didn't crash the others but several of my fellow club members have one now. They are good for sport flying, fun-flies and even pylon races. I particularly like the reaction of someone who hasn't seen a Corkscrew. After I taxi out, take off, go vertical doing snap rolls, they soon ask: What's the name of that airplane?

Enough about the small Corkscrew. For some time I had considered enlarging the Corkscrew because of the popularity of larger planes. I didn't really want to get into gas engines and, since I already had an O.S. 120 4-stroke, I thought a lightweight 80 in Corkscrew would be an excellent match.

The engineering of this model was a lot of fun, but there were a few problems to be worked out, and material choices to be made. I didn't want to overbuild and end up with an overweight plane because I believe it is better to build to fly rather than build to survive a crash, yet I didn't want a flimsy plane either.

The inverted engine and enclosed tank are purely cosmetic. There is a lot to be said for an upright engine and exposed tank for ease of maintenance and operation, but I prefer the inverted engine set-up and have had no trouble with it. Both upright and inverted installations are shown on the plans. The choice is yours.

3/16 in balsa was chosen for the fuselage sides with 1/32 ply doublers. Cross-grain 3/32 balsa was used on the top and bottom of the rear of the fuselage. This resulted in a strong lightweight body. 3/8 sheet balsa was used for the tail feathers which simplified construction. All balsa used on the plane needs to be about medium weight.

The real problem with enlarging this plane came with the wing. First thing was the ribs - how many and what size balsa to use, what size spars, dihedral brace, ailerons and leading edge, etc. I added three extra ribs per side and kept the ribs at 1/8 thickness because it looked right. After all, I'm not an aeronautical engineer. The spars are 1/4 x 9/16 spruce which are cut from the 1/4 x 2-1/2 x 48 spruce sheet sold by Balsa USA. The leading edge is 1/2 in diameter dowel. The Corkscrew 80 now uses 2 inch wide ailerons which improves the roll rate.

The final result of this project is a strong, but not overbuilt airplane that will easily come out in the nine pound range. It will fly a book full of tricks that will have people coming to you asking: What's the name of that airplane? That very thing happened to me every time I flew it at the first IMAA fly-in I took it to. Every time I landed, two or three people were asking questions and asking for plans. After I got home, I called Dick Kidd at RCM and asked if he would be interested in a construction article. I realize that I didn't really design it - just enlarged it. (Actually, I think I stole it!) After some photos were sent I received the go ahead and this is my first attempt at writing a magazine article and having it published in RCM which has been a dream of mine for some time.

I will talk more about flying this plane, 4-stroke engines and radio installation after the construction section of this article. I would like to give you just a couple of other facts about this plane that I hope will get you interested enough to build it. Your wood bill for this plane is in the $30.00 range. It will climb at a 75° angle till out of sight. And, unlike some large airplanes, it doesn't float like a cement block when the engine quits. In fact, you can almost thermal with it. It makes a very good first Giant airplane, and I believe that with the throws set on the mild side it would make a very good trainer. Many people have said that it really shows up in the air and is very easy to see.

One last thing, with the O.S. 120 4-stroke, the fuel economy is excellent. We timed one flight and got almost 20 minutes on a 12 oz. tank and still had an ounce left. About 80% of that flight was at full throttle! A .60 2-stroke engine would surely fly this plane, but the vertical performance would suffer.

Why not do yourself and your budget a favor and build a Corkscrew 80? Why not order a set of plans and give a call to Balsa USA (which I highly recommend for quality of product, price and service) and get to hacking?

Construction. Building this plane is about as simple as it gets. Anyone who has built a kit or two can handle this one. You will need the wing about midway through the assembly of the fuselage (when it comes time to bolt the wing to the body) so I suggest that you start on the wing first. The plane can be built with about 85% CA type glue and builds very quickly. Start by cutting or sanding the inboard end of the wing spars, leading edge dowels, and trailing edge pieces to the angle shown on the plans..."

Quote: "Okay Gents... The original, smaller Corkscrew is posted on Outerzone but here is the larger one. I built this back in the early 90's and powered it with a weedwacker conversion long before it became commonplace. It was VERY fun then so I can only imagine now with the lighter, more powerful engines available. I don't have a magazine article scan but I did include the reprint RCM used to send with the plan." 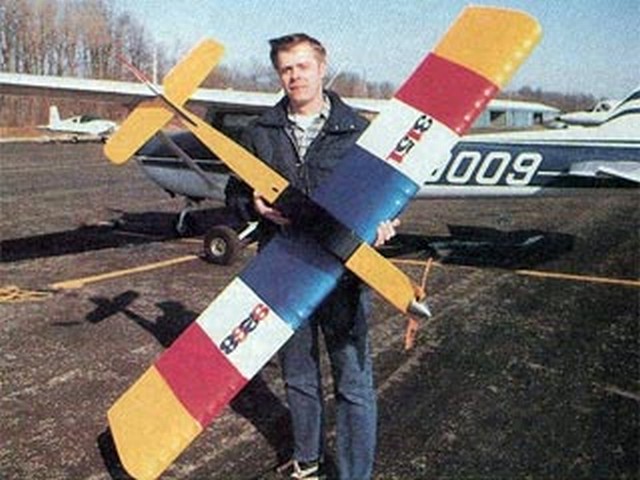