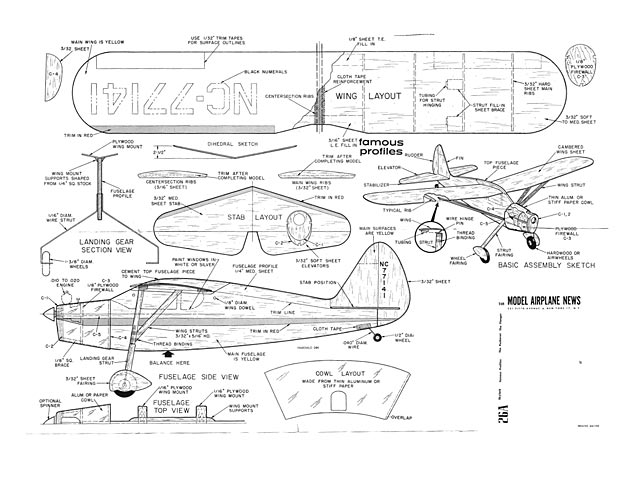 Fairchild 24K. Sheet balsa FF model for .020 power, by Paul Delgatto from MAN December 1963. One of his 'Famous Profiles' series of plans.

Quote: "One of the prettiest civil aircraft ever produced is the famous Fairchild 24K whose useful life span extended from the mid-thirties until the post-war period. In fact, the popular Fairchild cabin-job may still be seen at some air-ports. Functional and well streamlined, the 24K could boast a point-to-point time on cross-country that is fairly comparable with some of today's machines.

The proportions of the 24K, and a classic simplicity of line do not detract from its pleasing look, make it a perfect subject for a fine-flying model. Presented as a profile type for .010 to .02 engines, our model looks surprisingly life-like due to its three-dimensional cowling.

Construction. Fuselage. The profile portion of the fuselage, extending between the firewall and the rudder, is cut from a 16-1/2 in long, 4 in wide piece of 1/4 medium-hard sheet balsa. The body and all outlines can be traced directly from the fullsize plan. Portion above the wing is actually glued to the wing and removable. However, disregard this cut-out for the moment. In cutting profile, allow some extra material for a smooth contour.

Round off the corners as follows: from the front of the windshield forward to the firewall. leave the fuselage perfectly flat. From same point, but on the bottom of the fuselage. round each edge to at least a radius. On top. from the front of the windshield, to a point just past the leading edge of the wing, round off very slightly at the corners but, from the wing leading edge all the way back to the rudder. round off similarly to the bottom.

Using a balsa knife or single-edge razor blade, cut the section where the wing will he located. For aecuracy, and don't tilt the cutting edge sideways, make repeated light cuts and save the cut-out section.

Drill a 1/16 in diameter hole where landing gear passes through fuselage, also 1/8 in holes for the wing hold-down dowels. Sand fuselage with fine paper, using a rotary motion to insure against sanding groves in the wood.

Cowling: First, prepare formers C-1, C-2, C-3 and C-4. C-1 and C-2 are four laminations of 3/32 sheet balsa, cross-grained for added strength. C-3 is the 1/8 in thick plywood firewall. C-4 is in two half sections from 3/32 thick sheet balsa. Note that the rear ply of the laminated nose piece is slightly smaller all around, so that the stiff paper cowling cover will fit flush.

Before shaping the nose piece (C-1, 2) drill a hole for the engine shaft, then enlarge the hole with either a round wood rasp or sandpaper wrapped around a dowel or other round object. The engine should be mounted on the firewall with srnal wood screws before as-sembling the cowl, this can be done after the firewall is glued to the fuselage front, but before the cowling is closed in. Should you wish to substitute a nut plate for mounting bolts, this can be done before assembly..." 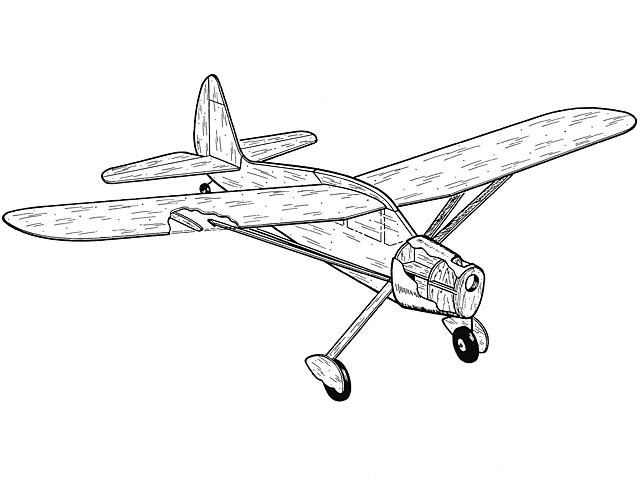