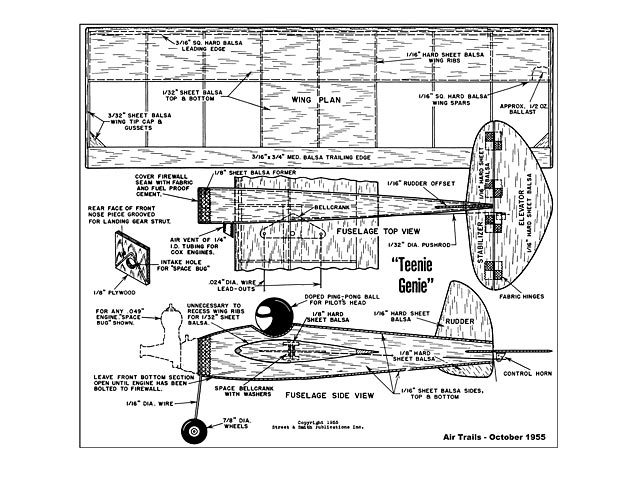 Quote: "This little Half-A stunt job is the result of a series of experiments undertaken to find out if an .049 job could equal the stunt performance of the much larger and more powerful machines usually employed for this purpose.

We found that it could. This model will do the pattern just as easily and smoothly, and almost as fast, as the best of the bigger jobs. In the hands of a reasonably expert flyer it will prove the equal of ships up to ten times its own weight and displacement.

It would be pleasant if we could say that the Teenie Genieis not only an excellent stunt plane, but considering its simple and straightforward construction, a natural for the beginner. But that would be ridiculous. A really good stunt plane is the worst possible choice for a newcomer. A beginner requires a steady, slow-acting ship with plenty of reluctance about its pitch axis and a mind of its own on the subject of longitudinal stability.

The requirements of a good stunt job, are, in the final analysis, diametrically opposite, It should have no 'mind of its own' at all. It should be simply a mechanical extension of the flyer's reflexes, and absolutely subservient to the mind behind the control handle.

Teenie Genie is that kind of a ship. It is not tricky in any sense of the word, because tricky implies erratic or unpredictable control response. and this one is neither erratic nor unpredictable. But it does react almost instantaneously to control deflections. It goes where you aim it, and it gets there mighty fast. So, before you pick up its handle, make sure you know how to aim, because this little bundle of dynamite has the stuff to bring a fellow a lot of hardware - or to sift him out into the pile marked 'wash-outs.'

The rig and flight trim are an important part of the theory underlying the model. The main idea was to arrive at a design which would react very rapidly to elevator deflections, and yet not be rigged in such fashion that sud-den and violent changes in direction would induce mushing - high speed stalling. We did this by holding wing tip ballasting to a minimum, using the rudder to prevent the nose from riding too far out of the circle, closely integrating the wing and elevator areas with control moments and total weight and power, and last, but far from least, we used a rigging trick we term 'centrifugal stall-quenching'.

This trick is simply to balance the model on the leading edge of the wing, instead of the first wire, and have the motor as far forward as possible from the bellcrank pivot. How does this work? Well, when the model is looped the mass of the motor ahead of its pitching axis tends to push the nose out of the loop, circle and this tends to counter the leverage of the elevator, opening the loop and preventing loss of speed.

By carefully adjusting the elevator area and moments between the CG, center of lift and tail leverage we arrive at proportions which permit the model to loop as tightly as aerodynamically possible, yet not mush as a result of a sudden control movement. This system can be applied to many conventionally rigged stunters, although it will probably be necessary in many instances to build a new elevator if the present one is of high aspect ratio. With Teenie Genie the proportions are already worked out.

Construction is very conventional and should require no great explanation, particularly since the model is intended for the more advanced flyer who probably knows how to put a model together as well as the author. Just a gentle reminder, however, that the difference between a good ship and an excellent one is often only careful wood selec-tion and exacting alignment. The most suitable .049 engines for this ship are the very light weight high rpm jobs. We prefer to use Kaysun plastic props on the Wasp-type engines and Tornado woods on the Space Bugs.

For lines, we have found the very fine steel wire to be snarlingly unco-operative; Nylon is betters but it takes a set and holds bends which may catch after a few loops. Best we've found to date is #20 mercerized crochet thread. Stretch it fairly tight, and go over it two or three times with a wad of absorbent cotton which has been dipped in somewhat thinned hot fuel proof dope.

Remember - always cheek your lines carefully before each flight!" 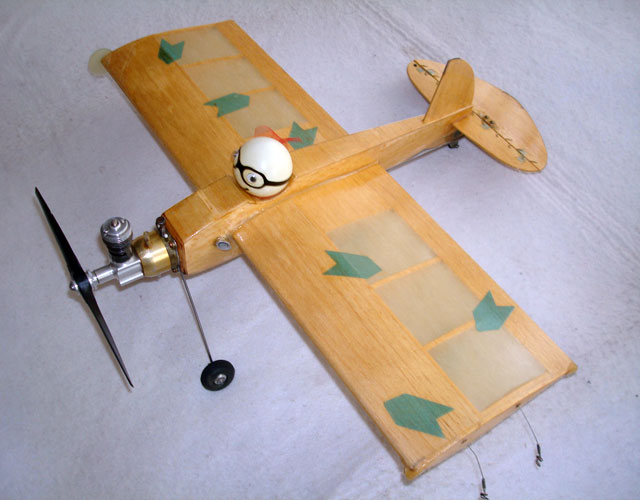 Some more photos for you, this time as a tribute to my brother Santiago who left us after more than fifty years of aeromodelling. I send you some photos of a model that amused you and I flew it with a very special amusement [model photo & more pics 003-008].
AntonioRodriguezGarrido - 21/12/2017
Add a comment