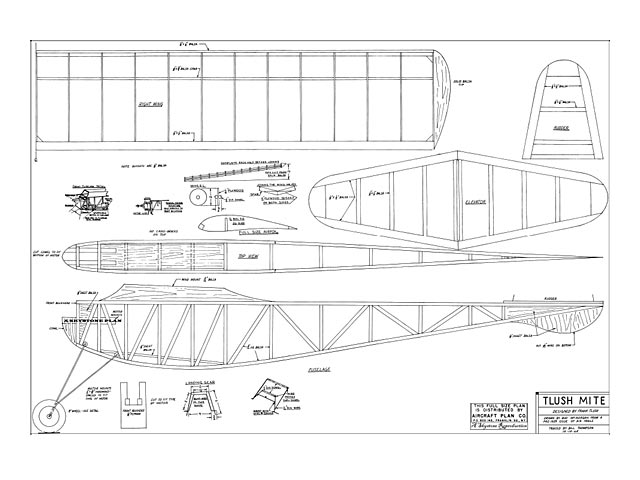 Originally published in May 1938 Air Trails as 'The Midget-Powered Mite'. This here seems to be a faithful reproduction, from Skystone.

Quote: "The Midget-Powered Mite. By Francis Tlush. In collaboration with Gordon S Light.

Plans for duplicating a four-foot gas model that disappeared after a 54-minute, 30-second motor run - an inexpensive construction project.

THIS model was designed and built primarily to test a small engine which we had just built. First results were not satisfactory. But after a new propeller had been designed and installed the flights made us sit up and take notice. The little ship behaved even better than we had expected, packed more of a thrill than the larger contest models. However, the fun of flying this model was destined to be shortlived.

We had been flying it all morning. It had turned in one perfect flight after another. After several unsuccessful attempts to pack up and go home for lunch, we finally decided on one last flight. It was this extra flight that made us late for lunch and sent us on an unscheduled tour of the neighboring country. The motor run averaged 30 seconds, just as it had previously. But after the motor stopped the model showed no intentions of returning to the field. Instead it continued to climb on a helpful thermal and leisurely drifted toward New York City. We continued to follow it as far as Jersey City, where it disappeared high in the sky leaving no clue as to its ultimate landing place. The stop watch showed 54 minutes up until the time of disappearance. And no news of the model has ever been received despite the name and address being clearly marked on the fuselage.

Fortunately, photographs had been taken that morning. Such thoughtfulness is praiseworthy. Usually the model has disappeared before you think seriously of photographing it.

Construction follows the general methods used in build-ing a simple rubber-powered job. The size of the model should fit the requirements of the rubber modeler who is beginning to branch out into the gas-model field, and the relatively small cost of materials will help bridge the gap between the cost of rubber models and the large gas ships.

Motors with radial mounting can be bolted directly to the front bulkhead with the gas tank extending back into the fuselage. This practice permits the use of a shorter motor mount, which is less likely to break and is light-weight.

Motors with the conventional mounting flanges can be attached to hardwood motor mounts extending from the front of the fuselage. These mounts are A.x3/8" and pass through the front bulkhead and are further secured to the fuselage structure with cross-bracing of 5/10x3/10" balsa. The bottom of the motor is cowled, using a block of balsa carved to fit the bottom curve of the crankcase and fairing into front bulkhead. Cement this block directly to the bulkhead. 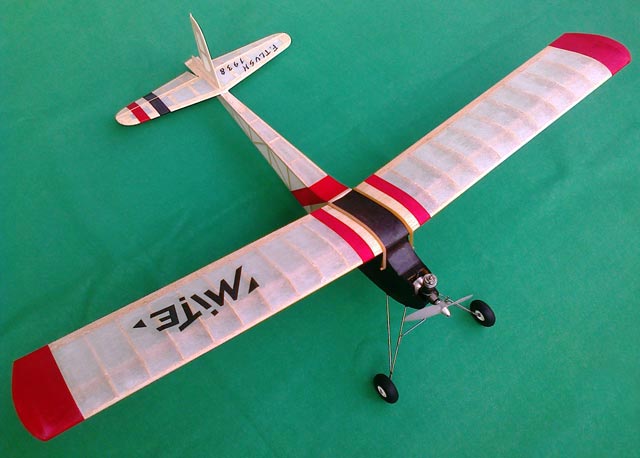 Dear friend, here are a few pictures of a model I built with top downloaded from Outerzone "Tlush Mite 1938" [model photo & more pics 003]. l'd like to see in The Gallery of the Anniversary, thank you
GiancarloPiovani - 04/04/2016
Add a comment