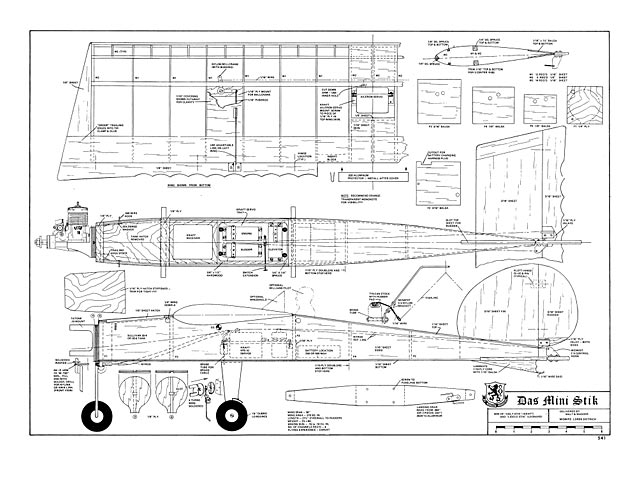 Quote: "If you think you're a hot pilot, try this 36" span, .19 powered son of Ugly Stik and Liddle Stik

Stretch your memory back to 1966 when Phil Kraft came out with the 63 inch Das Ugly Stik (oz5175). It was a boxy aircraft with a few scalloped edges on it to make it resemble an Eindecker. It became so popular that the advent of small propo radios inspired Larry Leonard to publish a 46 in version called Das Liddle Stik (oz4952) in 1968. Well, the small size of the modern radio has inspired Wagger to try a 36 in version.

If you were inexperienced, I'd say stay away from this little bomb for awhile, It doesn't have a single bad habit, but it's responsive as a new bride and it greases in pretty fast.

How about spending a little time going over some of the features and its flight characteristics? First of all you'll notice that the construction is almost identical to the Liddle Stik. I did move the battery pack to the rear and the nose wheel to the front of the firewall; that was necessary to keep the CG in position and to make room for a tank to feed that OS Max .19. Install the battery pack with foam during the construction, then glue in a couple of scraps to hold it in place. I used the small 250 mah pack, but I'm sure the 500 mah pack would be fine.

The nose wheel assembly, you'll notice, is external for simplicity and cheapness as well as tank volume. If you fit the plywood pads carefully, you'll find it as durable as any you've used. Originally, I used a Nylink to fasten the NyRod to the piano wire tiller. However, after shearing the pin out of several, I did this: take a sheared Nylink and drill another hole right where the pin sheared out. Bend up an 'L' from piano wire and pass it through the Nylink and tiller; then slide a piece of fuel tubing over the Nylink and piano wire leg. It takes the punishment, but doesn't cause metal-to-metal noise. An accident usually only bends the tiller slightly, and it can be straightened and re-soldered easily.

Now, for the fuel system. The Pylon brand SS-4 tank will fit easily, but gives a little less duration than I like for Sunday flying. Just to see if I could do it, I crammed an SS-6 in and it works! Looks god-awful though, so I'd suggest you use the 4 ounce and be content with reasonable flight time. With either tank, I'd suggest you use the Mickey Mouse pressure system mentioned in RCM a couple of years ago. For those of you who missed it, do this: Take a small piece of brass fuel tubing and drill a small hole right smack through one side of it. Then drill a couple of holes though the exhaust stack of the engine that will be a snug fit on the tubing. Slide the tubing into these holes, being careful to align the hole in the side of the tube to point directly at the piston. Pinch off the bottom end of the tube, then deform the other end slightly to keep it from working out. Then, run a piece of black neoprene tubing from the top end of the tube to the single vent of the tank. The idea is to put the pressure of the exhaust directly into the tank to supply a more positive flow during maneuvers. A fringe bene-fit of the method is that pressure is proportional to engine speed, giving oomph during maneuvers but no flooding at idle. It's so darn simple it shouldn't work but it does! I recommend it anytime, but it's quite necessary if you are going to try to run a 6 ounce tank on a .19. Give it a try.

In case you think the brakes are a luxury, forget your thinking and put them on anyway. They operate with down elevator, and give complete ground control. They give time to collect the courage before take-off and are also used to bring it to a smoking halt after landing. The only change from Kraft drag brakes is the addition of a small shoe with rubber brake lining, since the wheels are small. The ideal lining for them is sections from a rubber leg pad for metal folding chairs. Ten cents gives enough brake lining for a year.

The construction of the Mini Stik is not particularly light, so the covering must be. If you're careful, four feet of transparent MonoKote will do the whole job with less weight than any comparable technique. In addition, it's easy to patch and you can see the thing against the grey winter skies! So help me, that transparent orange is like flying a flashing spotlight. Don't consider anything else for this bomb.

The radio presents no real problems on installation, although it is tight. Servos must be Kraft KPS-10's or smaller, of course. My receiver did not allow loose foam packing, so I just laid it gently in place between the two nylon pushrod housings. I then put a small piece of foam between it and the servos. DON'T wedge it in place with tightly packed foam which will transmit vibration horribly. I've had no problem in over a hundred flights.

On the power end, I use a Kavan carburetor because I like its idle and full power. Straight Supersonic 100 is adequate and gives long life. Either a wood or nylon prop is fine; I use a 9-4 cut down to 8-1/4, and then carefully balanced. Power could be reduced to a .15, but no further with full-house multi.

Now, for flight. It will do every-thing its mommy and daddy will do and maybe a couple of things that they're scared to try. Take-offs are simple, just steer and hold some 'up.' If your engine is running well, pull up to sixty degrees and climb out of sight. When flying the pattern, be sure to use rudder, as necessary, for tracking during loops since it is short coupled and has fair torque. Rolls are so fast that you lose count after three. Spins can be recovered after three by releasing controls. After more than three spin turns, give a little down for recovery. Snap rolls are recovered by releasing controls, this wing is not prone to sudden 'cut-off' or unintentional snaps, so don't worry about it.

Landings take the same technique as any hot aircraft. For the record, I have landed it without power a num-ber of times when making tank experi-ments. Just keep the speed up right down to the ground, then flare and you're in..."

Quote: "Hi again Steve - This is the das mini stik scanned directly from my original issue RCM Tenth Anniversary October 1973. Thanks for all the hard work for providing us all with Outerzone! Submitted by jeff mccammant story city iowa."

Quote: "Here you go Steve - its not complete as I deviated from the plans for the top and back sides - I hope this is useful. Again thanks for your site - a great resource" 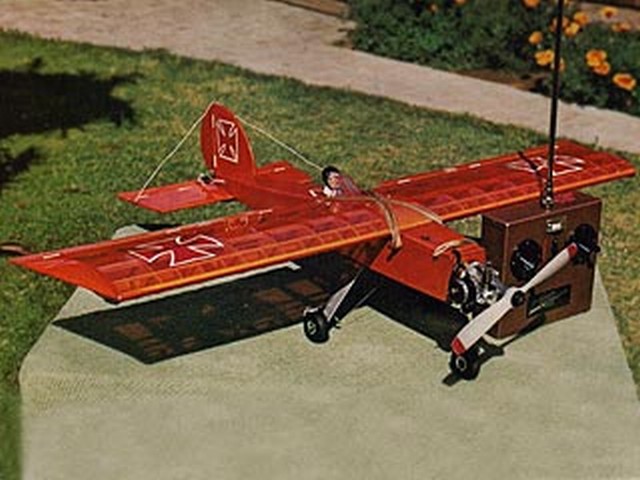 Great plans! building it now and all i need to do is the covering. this was my first build and i highly recommend building this model. very detailed plans and are easy to follow. Also shows how to do a steerable nose wheel and breaks.
tennapel - 04/01/2015
Hey there, Thought I'd send a quick note of thanks on the "Das Mini Stick" oz6144. The plans were great - I traced them in Lightburn and cut them out using my laser cutter and I have attached a pic of the result. I do have the DXF files if you are interested. Let me know. It had its maiden the other day and flew great! Regards,
Ian Langley - 09/02/2021
Yes please to the DXF file, that would be great.
SteveWMD - 09/02/2021
Does this ever bring back memories. I had an identical transmitter like shown in the pic, a PCS, which was a private label actually made by Kraft. It was sold mail order only for the then bargain price of $300. Those were non-inflated 1967 bucks, pretty hard to come by when I was a member of the USAF with two stripes on my arm. In those days, every R/C brand used a different color, and all the good colors were already taken. Brown was the only one left. I suspect the reason for PCS' existence was to sell the remaining capacitor servos, which were rejected by Kraft customers. Kraft replaced the troublesome feedback pot in each servo with a variable capacitor stolen from a transistor radio. It worked, but not well, and Kraft abandoned the idea Improved pots helped the problem and we still use them today. I replaced a servo with a bad pot just last week. I crashed my PCS system and the receiver no longer worked. Not wanting to send it to Calif, I needed a crystal but no parts were available for sale. I was able to find a CB radio crystal on the closest available channel and re-tuned the receiver to match. Worked perfectly for several years. It's always something.
Doug Smith - 10/02/2021
The cad file is incomplete. It is more of a cut file but no wing.
Gene - 11/02/2021
Hi, In my doing my my bi annual browse of your plan files, I ran across this this plan. Back in the late seventies I built a slightly smaller version using an O.S.10 FSR and a micro (for that time) Ace RC Rx and servo kit I had assembled. Had the nose wheel steering, brakes and four servos. It flew very well, not overly fast as I recall but would do anything I asked of it. A couple of years later a flying buddy bought it and the last I heard he still has it.
Thanks, and keep up the good work!
Scott
scott - 01/11/2021
Add a comment