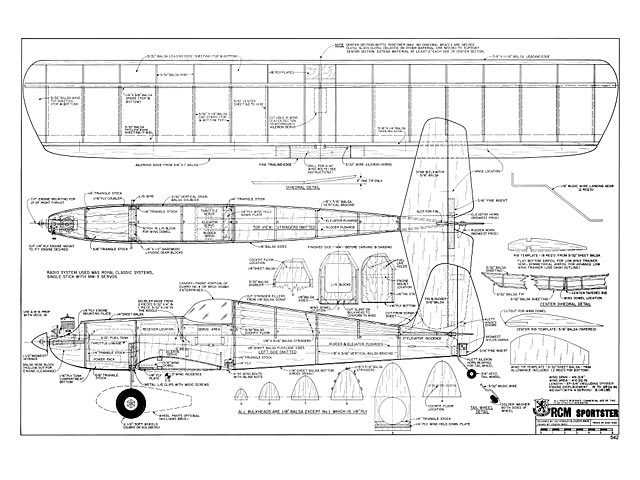 One nice sunny, smogless day in California we were out at the local flying site doing our thing with the RCM Basic Trainer (oz5103) when all of a sudden we said to no one in particular: If we took the same wing, rear rudder and elevator and put the wing on the bottom we would have a dandy, fun to fly model.

This is how it all began, so we proceeded to make these changes and now we have the RCM Sportster. The wing is the same as the RCM Basic Trainer except the aileron horns come through the top instead of the bottom. The rudder and elevator haven't any changes whatsoever. The motor mounts are the same but the fuselage sides are different. We also added a canopy and turtledeck.

Several months later we finally got the prototype assembled and ready to fly. Once again, we were back at our local flying site testing out our idea. We fueled up, flipped over the prop and we were ready to fly. All controls were checked so we proceeded to taxi out on the runway. Everything was working well so we gave her the gun and off it went.

I was amazed - it lifted its tail, and then broke ground just as gentle as you would want it to do. No elevator was needed, but a little rudder was applied. The only trim changes it needed was a couple of turns of down elevator. Other than that it was virtually trimmed out. We had a ball flying the Sportster that day and for quite a few more days since. We also tried some crosswind landings and take-offs with huge success. A little rudder has to be applied to compensate for the wind, but crosswind take-off and landing are possible with little effort.

Update 25/01/2016: Replaced this plan with a better copy scanned from a fullsize plan, thanks to Balsaworkbench, scanning by Don at EAC, cleanup by theshadow. 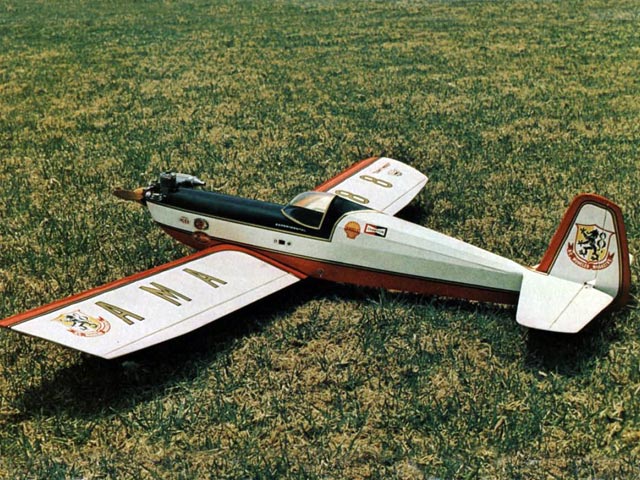 I flew this for over 15 years. 20 years later and I have the Great Planes electric version. It is even better.
GSFinlay - 29/12/2015
Here are a couple of photos of the RCM Sportster that I built from your plans, RCM 543, OuterzoneID: 6143 [pics 003, 008]. Converted to electric. It flies great with a Propdrive 3536-1400KV motor, APC 10x5E prop, 50 amp ESC, and a 2200 mah battery. Flies for about 8 minutes with throttle management. Needed 3 oz weight in the nose to balance (I moved the rudder and elevator servos to the rear of the plane). Weighs 3-1/4 pounds ready to fly. Thank you for hosting Outerzone!
RonaldSwenson - 10/10/2017
Hi guys. I built the RCM Sportster, plan OZ6143 from your great website! It is not completely finished. I still need to make something on the nose to cover the motor, but the maiden was a few days ago. The build was quite easy using the article but the plan actually explains itself. The motor is a D3530/14, 1100kv on 4s/2200mAh. Prop is 8x5 and this results in 1.250Kg thrust @~300Watt. I had to put some weight in the nose to reach proposed CC point. The flight went very well, no surprises. I gave full throttle in light wind and after 10, 15 feet she jumped in the sky gracefully, turns were smooth and she reacted nicely on the controls. I could fly her around at 40% throttle. The landing was amazing, just keep her nose in the wind and throttle back that's all. No tip stalls or snap rolls, she just puts her wheels on the grass. She flies very well, just a little left rudder correction as I stupidly built in too much side thrust. It's fixed now after some shimming under the motor mount. It is also a great looker on the field, lots of nice comments [more pics 004-007]. I made a waterslide off txt with "Outerzone RCM Sportster" on the wing. Thanks so much for letting us have these plans!
Ed_Vink - 17/04/2019
Hi guys, I wonder if you could add to the plan oz6143, some of the attached photos of my old RCM Sportster, built in 1973 and still flying [pics 009-012]. Thanks for your wonderful database. Best regards,
Sergio Piraino - 17/10/2020
Hello friends, I was going to build an electric rc plane, then I saw this model, I want to do the electric one, but I can't find the electric one when I search the internet. Can you send me if there is a project of the electric model please.
yekta - 09/04/2021
Add a comment