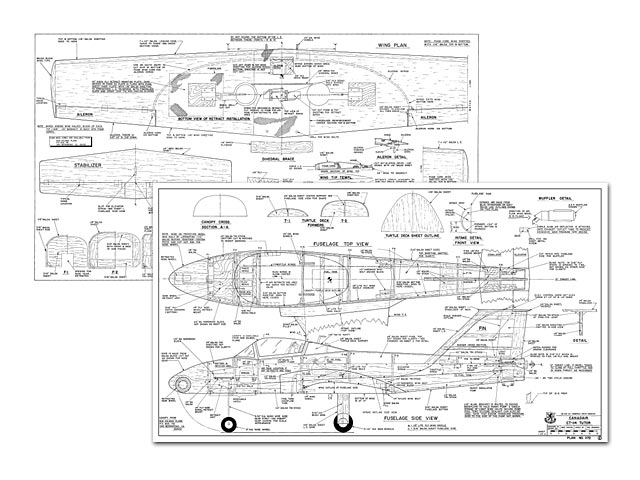 Quote: "Working as the Manager of Operations and Maintenance at Abbotsford Airport in British Columbia, Canada, Iget to see aircraft of all types come and go from my office window. I even get rides occasionally (the most exciting to date being a full aerobatic routine in a Christen Eagle). As an aviation enthusiast, however, the highlight of each year happens the second weekend in August when Abbotsford Airport hosts the world reknowned Abbotsford International Airshow. For three days, top acts from North America and beyond literally descend upon Abbotsford resulting in one of the best and most famous airshows in the world.

The US Navy Blue Angels or USAF Thunderbirds are always present, Italian, French, and Brazilian teams have participated, and this past year marked the first North American visit by the Russian Knights in their SU-27's. There are also many military and civilian solo performances during the three day event. It is truly an exceptional show and one of the highlights is always a performance by Canada's own flight demonstration team - the ''Snowbirds.'

The Snowbirds, a nine plane military jet team, are world famous for their tight formation flying. Seeing nine aircraft perform loops, rolls, and other maneuvers as though they are one is nothing short of spectacular. While the Snowbirds do not have the speed and power of the Blue Angels (F-18's) or Thunderbirds (F-16s), they fly with a grace and precision that is unsurpassed.

The Snowbirds have been in existence for 22 years and perform more than 60 shows per year in Canada and the United States. The aircraft flown by the Snowbirds, and the subject of this construction article, is the CT-114 Tutor. Jet built by Canadair. Similar in appearance and function to the Cessna T-37 used by the U.S. Military, the Tutor is Canada's primary jet trainer. It is 22 ft long, has a span of 36-1/2 ft, weighs 7000 lbs, is powered by a single GE J85-CAN-40 engine and has a top speed of 470 mph.

I have watched and admired the Snowbirds for many years and it is with a great deal of National pride that I present this construction article. My rendition of the Tutor Jet, while not exact scale, is very authentic looking. It uses pusher prop propulsion instead of a ducted fan or a prop on the nose. As I have stated in two previous RCM articles F-18 (oz5992) in April '91 and A- 10 (oz6948) in May '93), I like pusher prop jets because they are less expensive and simpler than ducted fans and look better than 'jet' models having an engine and propeller up front. Pusher jets also seem to have more static thrust than ducted fans which enables them to take off from grass fields with ease.

I designed my first Tutor Jet for .25 power and intended for it to be a hand launch 'fun' airplane without landing gear. Unfortunately, by the time it was completed, the 400 sq in, 50 in span bird weighed over 5-1/2 lbs, and was not a good candidate for hand launching! Although somewhat discouraged, I fabricated a very crude dolly system no that I could at least test the aircraft's acceleration with a seemingly undersized engine. After ironing out some bugs in the dolly system, we found that the aircraft had great acceleration with the Magnum 25. It took off from grass in less than 75 feet and flew very well perforating rolls, loops, and split S's with ease. My friend, Kerry McAllister, test pilot extraordinaire, put on a very realistic Snowbird solo routine with the exception of a couple of tail slides that were more reminiscent of an SU-27 demonstration.

From the moment the model attained flight. I knew I had a winner and immediately began thinking about a larger version with retracts and at lot of scale appointments. After a few months ot enlarging and refining the original plans. I was ready to start construction. The most significant changes from the original design, apart from size, were the wing (now foam core instead of built-up), the retractable landing gear, and the clear canopy (instead of painted foam). The new .46 size model would have at span of 60 in, at wing area of 550 sq in or so, and a ready to fly weight in the 7-9 lb. range.

All of the necessary wood parts were cut out in two evenings and the fuselage was assembled and sheeted in one day. The wing cores were cut using the Feather Cut system and were sliced and assembled in one more day. In fact, I had the basic airframe finished in less than a week. The retracts, radio, tank and engine installation took a couple of evenings. The canopy fabrication took the most time because I had to
construct a vacuum forming rig and a plug for the canopy. (Canopies and wings are available from Bob Holman Plans - read on)

I started construction in July and wanted to be finished by Airshow time so that I could get some good static photos alike model in front of the real one. I accomplished this and was able to show the aircraft to a number of current and former Snowbird pilots. The model was a hit and I was fortunate to get some great pictures.

Once all of the static photos were taken, it was time to go flying. On an overcast Saturday morning in August, my support crew (Kerry McAllister and Rip Kirby) and I bred up the ASP 46 and sent the aircraft down the grass runway..." 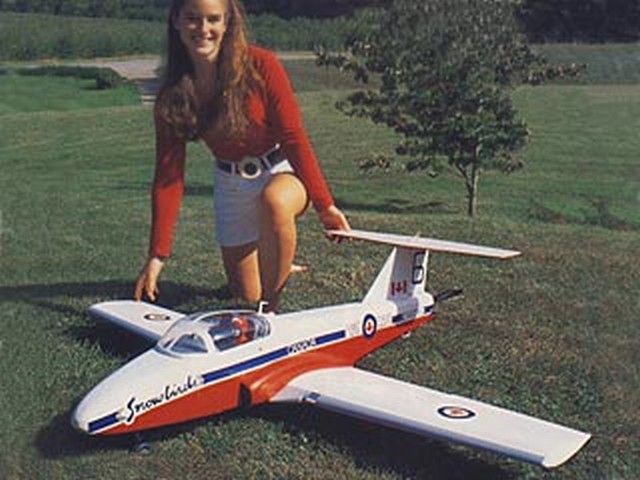