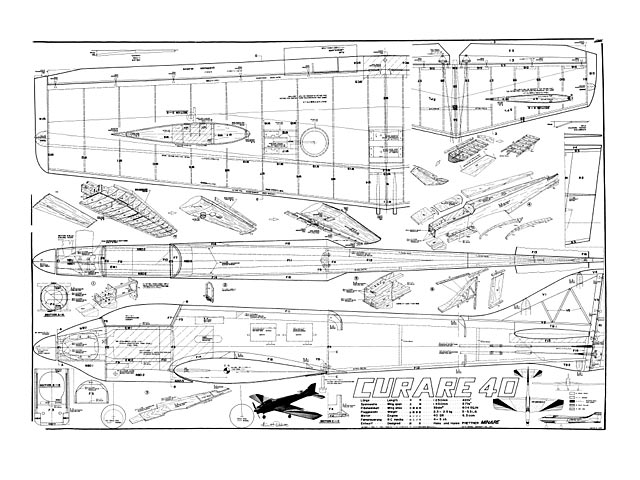 Quote: "Hi Steve, Following a discussion on a forum I was *sure* that the Curare 40 was on OZ, but it’s the full size Curare 60. The discussion was that the Minare is in fact the Curare 40 and I agreed because I had seen it on a plan. I thought it was on OZ but it was instead in my own collection… So… Here’s the plan of the Curare 40 by Mr. Hanno Prettner. Good to see you back online. Cheers,"

Update 27/11/2014: Replaced this plan with a much clearer copy, thanks to DerickScott.

CURARE was the design with which Hanno Prettner won the 1977 World Aerobatic Championships, and has appeared commercially in various forms, from plans to semi-kits with glass fibre fuselage and foam tailplane and wing. The MK Curare 40 is a 'mini' version with a 57-1/2 in wingspan and is of all built up construction. Balsa and ply-wood parts are cleanly die-cut and include parts for retractable u/c installation, while outlines are given on the plan for inboard flaps.

The version I built included the use of the flaps, coupling them with the elevator when necessary with the mixer in my Futaba J8 radio. Retracts were passed over in favour of a fixed undercarriage.

Construction: Motor mount hardwood beams and the front formers slot together to jig the front end of the fuselage, forming the necessary side and downthrust.

Fuselage sides themselves were prepared from two pre-cut balsa sheets, front and rear, with 1/8 ply doublers. The fuselage sides and completed front formers with motor mount are then joined, the components interlocking to produce an accurate struc-ture. Remaining formers, nose ring and triangular section strip are then added as the front and rear fuselage sides are pulled in. Tail end linkages should be thought out and then fitted at this stage.

I used a closed loop linkage for the rudder and a conventional push-rod with a Y-end for the elevator, the 'Y' allowing for independent adjustment of elevators. Bowden cables were fitted for throttle and steerable noseleg control. Top and bottom sheeting was then fitted. Upon provisionally cutting the canopy and fitting it down on its base, it was found to be a little short and 1/8 sq balsa was fitted to the canopy floor to take the transparent top. The fin parts were then built up and the wing fillet balsa was prepared and shaped up. The fuselage wasthen carved and sanded to shape using card templates taken from the fuselage sections shown on the plan.

Wing: The wing was built on flat board without any type of jig. First the false trailing edge balsa, being of constant depth, was pinned down over the plan and the root and tip ribs placed up against the trailing edge, the under side edge of the ribs at the trailing edge touching the building board and plan ('the backing of the heatshrink covering is ideal to stop the parts from being stuck to the plan'). Next the false leading edge stock, tapered from root to tip, was pinned to the ribs. These parts were lined up over the plan and secured to stop them moving around.

The remaining ribs were fitted and the top and bottom spars slotted into the ribs. All the joints were tacked with cyanoacrylate and then PVA was applied with a small paint brush. After a drying period the wing panel was lifted from the plan. The other wing panel is built in the same manner only with the rib numbering upside down, the airfoil section being so nearly symmetrical this being the only way to tell which was the top. Balsa webs were fitted to the spars, then linkages and undercarriage fixings are arranged. The wing panels were joined together using two 1/8 ply braces which were only the width of the servo well. Wing skins were prepared from 3/32 balsa sheet provided. First however, as I had opted for a fixed undercarriage, 1/4 in ply plates were fitted with 1/18 ply rib doublers for reinforcement. Finally, the servo well was lined and the wing sheeted.

As I was going to use flaps a composite torque linkage had to be built with 12 gauge brass tube flap torque tubes sliding in 10 gauge brass tube, plus 12 gauge wire for aileron torque rods passing through the flap tube. Flattened brass tube formed the horns, drilled for clevises and soldered to the brass flap torque tube and aileron torque rods. Flaps were made up from 3/4 balsa, 6 x 2 in size. To fit the flaps to the torque tube, a length of 16g wire with the ends bent over to form 1-1/4 in prongs was soldered to the tube.

Ailerons were made up, tip blocks fitted, leading edge added and shaped and the wing was almost complete. Finally, centre section was reinforced using 4in. glass bandage.

Tailplane: This has a fully symmetrical section and was built in the same way as the wing, finally being sheeted with 1/15in. balsa skins. A ply brace determines the tailplane anhedral. All the major parts were finally shaped and sanded. The tailplane and fin were fitted to the fuselage after the wing was bolted on. The wing and fin fillets were then sanded down.

Finishing: The model was finished with car aerosols. All the parts were first sealed using two coats of sanding sealer sanded down, then heavy-weight tissue was used on the wing, fuselage, tailplane and fin, and lightweight tissue on the control surfaces. The tissue was applied dry using 40/60 dope and thinners. The model was given two coats of thinned dope and one coat of full strength dope, sanded down until a shine appeared between each coat.

Spraying a model demands a lot of pre-paration work, marking out the design, mask-ing off, stopping over spray with newspaper, etc., but the end product is a very durable finish. The colours of the model are the same as the boxtop original.

Final details: Futaba J8 RC and five servos were used. Servos were fixed on hard wood rails in the fuselage and wing. Fitting the aileron and flap servos required care to avoid any fouling but did not present a real problem. Undercarriage legs were formed from 10 gauge wire, then 2-1/2 in main wheels and a 2 in nose wheel were fitted. The centre of gravity was about 1/4 in behind its indicated position when the tank was empty. The tank is shaped to fit tightly between the two front formers. Control throws were ailerons 1/4 in each way, rudder 1-1/4 in each way, elevators 3/8 in each way, flaps 5/8 in each way when coupled with the elevators and 40° for landing flap. The all up weight was 5.4 lb and the building time was approximately 50 hours.

Flying: Ground handling with the steerable nose leg was good, but the large fin could still weathercock the model into wind. Take off run was dead straight requiring just a hint of up elevator to get the Curare airborne. A couple of minor adjustments to the trim, a little left aileron and up trim, and then testing could begin. The model flew like I expected it to, very smoothly. Various manoeuvres were tried, loops, rolls, combination loops, and rolls, figures of eight, snap rolls, etc., all flown with the 40 size motor with a standard silencer. I have also flown it now with a tuned pipe and it climbed up the vertical manouevres a lot better. The coupled flaps and elevators do cut the corners of the square loops, etc., and when landing, slows the ground speed right down even in nil wind conditions.

Summary: The design of the kit goes back to the old days with all built-up construction. The die-cutting is excellent. This 40 powered version is far more economical on fuel yet in open or top aerobatic competitions could still be a winner." 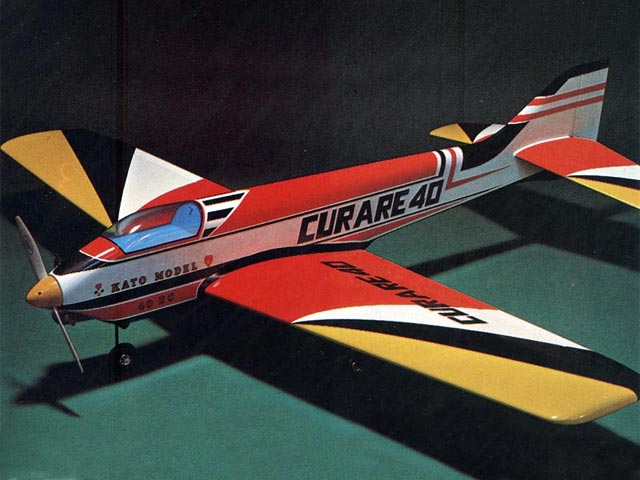