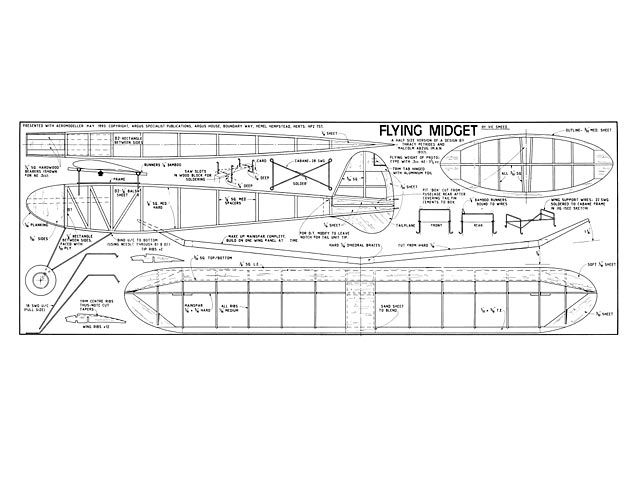 When the Flying Midget Gas Model (oz10593) design appeared in the August 1937 issue of Model Airplane News it caused a few doubletakes. A 49-1/2 in model with a Brown Junior power? Browns were more usually seen in seven or eight footers! The ability to throttle the engine down to a point where a four foot model could be flown safely was taken up by Brown's marketing people and used in advertisements. The general concept of the model is very typical of the Petrides approach with a tip dihedral wing parasol mounted on a simple box fuselage: the published drawings were signed by Abzug but whether he built the prototype or what his total input was is unclear. The present model was at Middle Wallop and the subject of a conversation with one of our Ameri-can visitors, Abe Gallas, who, it turned out, worked with Mal Abzug for eight years!

In its original form the model makes a very safe and stable flier with, say, up to .19 ignition engines or 1.5 - 2.5 cc diesels; I know of at least two which flew for many hours until oil soaking triumphed. Drawings showing the ignition setup with the Brown appear in 'Model Flying the First Fifty Years', if you can borrow a copy.

A half sized version seemed an ideal vehicle on which to try out an AE 0.2 cc motor and would also offer possibilities for electric and CO2 power. It works out at about 75 sq in wing area which, with the flying weight coming out at 3.75 oz, gives around 7.25 oz/sq ft wing loading. The glide is reasonable but not very floaty due to the reduced efficiency of the narrow chord wing. It climbs quite well on the AE motor and makes a pleasant little fun model; in thermally conditions it could certainly be a fly-away, especially with a 30 second plus engine run which would take it to a height where thermal acceleration becomes noticeable. Fortunately a D/T can easily be fitted if required.

In scaling down, the original structure is followed except that only six ribs are used in each inner wing panel instead of ten, and the curved cross wire between the undercarriage legs has been omitted. There are slight differences in the engine bearer anchorages but the general principle is followed and in any event installation of different power units will inevitably cause alterations.

Construction. There is nothing particularly tricky in building the model, though it is not recommended for anyone who has not built two or three models. In particular, the wing mounting cabane could be a problem to those who have difficulty soldering and care is needed to prevent the tail surfaces warping when covering and doping. The fuselage is a simple box, assembled by first cementing the sides..." 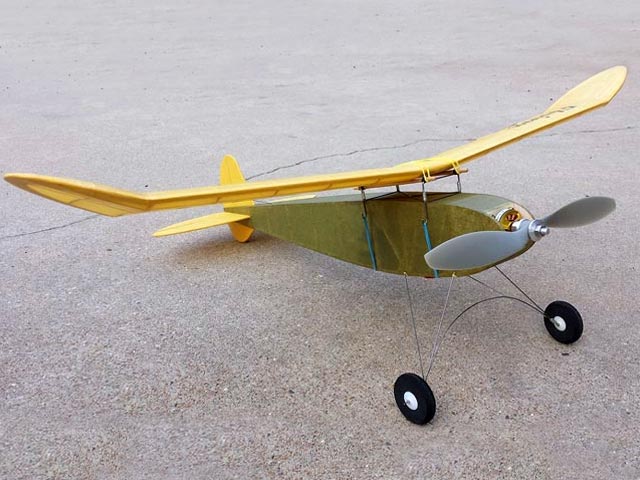