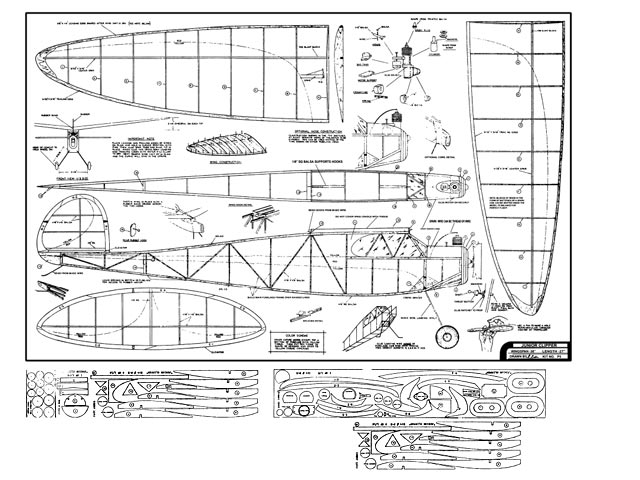 The original 71 inch Comet Clipper (oz7380) gas model appeared in 1938. This here is a reduced scale version, for rubber power. Designed to look like an IC model, so this one comes complete with drawings for a dummy IC engine.

Quote: "We Test: the Clipper Jr, by Chuck Wood.

The Comet Clipper (oz7380) first appeared in kit form as a gas model in the late 1930's, and it is still flown throughout the world both as a gas and rubber-powered model. Designed by Carl Goldberg, of Zipper (oz387) and Sailplane (oz1058) fame, it is one of the most successful of all free flight models, combining realism and contest performance.

The present Clipper is the rubber-powered version of 36 in span. It is lightly built but very rugged. Construction is the familiar box fuselage, flat tail surfaces, and single spar wing. The model is manufactured by Comet Model Hobbycraft, Chicago, Illinois, noted for its free flight contest designs and rubber-powered models.

When the writer decided to build the Clipper for the 'We Test' series it was decided to ask two of the neighborhood boys (aged 13) to join in building the Clipper. The reason for this was to determine whether or not a youngster, whose building experience was limited to plastic and solid models, could successfully construct a fully built up model. Help was given to the youngsters in the form of advice and instruction, but no actual building was done for them.

Helping the two boys, Tommy and Lee, turned into one of the most interesting experiences the writer has had in building models. Old difficulties in construction long since forgotten were brought to mind while working with the two boys. Before starting to cut out the Clipper's printed parts, both boys were given pieces of scrap wood to practice on in making cross grain cuts and curved sections. The pieces were far from perfect, of course. Skill with a razor blade or knife is learned through many hours of practice, but it was surprising just how proficient in cutting printed parts the boys became with just a few minutes of instruction and practice.

Showing the boys how to cut formers and ribs so that the cut was on the outside of the printed line was done over and over, as was the cutting of the uprights and cross-braces for the fuselage of the Clipper. Some braces had to be made over so that a good clean fit was assured, but generally the boys' workmanship was good, and they soon would remake a poor fitting part without being reminded to do so.

Probably the most difficult problem to overcome was the tendency to hurry through the steps of construction. For example when the stabilizer was being constructed, both boys tended to hurry in placing the ribs and, if they didn't fit, cement was used to fill the gaps rather than cutting and trimming for a good fit. However these parts were pulled out, remade, and fitted again. It was impressed on the boys that In any model each piece depends on the other for strength and alignment, and that a warped surface can throw the whole model out of line. Once they grasped this fundamental they slowed down and the workmanship improved.

The tendency to hurry appeared too in sanding the ribs and trailing edges of the Clipper. Here again the boys had to be slowed down and shown how to sand slowly and carefully so that a trailing edge would be smooth from root to tip rather than a series of humps and bumps with sanding marks between. All of these fundamentals come to any builder in time and with practice, but being shown how to do it correctly results in a pretty fair model after the first few tries rather than over a period of many months.

Helping the boys with the Clipper was an enjoyable experience as well as an interesting one. Youngsters are eager to learn and a little help, understanding and patience, will encourage them to build almost anything. A boy of 12 can build the Clipper with little difficulty and he can get some pretty good flights too. The model will take off, climb 50 to 75 feet, cruise and glide down for a landing. A youngster isn't expecting contest performance. He wants a model he can fly at the school grounds and hang up in his room. The Clipper fills this need admirably.

The Clipper kit for the price of $1.00 is excellent. The material in the three kits purchased was checked and only one was found to contain any undesirable material. This was a piece of rock-hard 1/8 printed sheet. This was divided among the two boys and, while it resulted in sore fingers cutting the wood, it was good practice for them because in larger models some structure requires rock-hard balsa or hardwood.

The printed wood generally was good. The lines were clear and sharp and the wood was firm but soft enough to be cut with ease. The strip wood was clean and firm for the longerons and spars. Covering material was not as good as Jap tissue but it was brightly colored and stiff enough so that one coat of dope makes it quite rugged.

In the hardware a preformed wire landing gear is included and it really fits. No other bending is necessary. The machine cut prop is adequate for sport flying but for real performance it can be widened by adding soft 1/8 x 1/4 strips on each edge and then trimming and sanding.

The plans are clear and simple. Step by step instructions are given for the construction of the fuselage, and little details such as landing gear attachment, wing mount, and windshield outline are shown.

One of the neatest tricks in the model is the construction of the wings' trailing edge. A curved trailing edge is usually difficult to build and subject to warping. In the Clipper the trailing edge is constructed by pinning a strip of 1/8 sq along the inner trailing edge outline. Two more strips are then pinned and cemented to the first, giving an 1/8 x 3/8 trailing edge that is rigid and warp free.

Two suggestions for improving the Clipper and all low priced flying model kits in general are offered. One is to incorporate two spars of 1/16 sq on the upper camber of the wing from the main spar to the leading edge. These two small spars would add considerable strength and the covering would lay with less sag between the ribs.

The other suggestion (and this is generally true of flying model kits), is to give more information on center of gravity position and trimming the model for flying. A youngster without help is lost when it comes to flying a model. Step by step instructions on how to obtain proper glide, weighing the nose for CG position, the use of downthrust and rudder trim are always helpful. Small illustrations, cartoon style, would be a boon to builders of free flight models; this is something not yet done in the industry.

For the older builder, the Clipper offers intriguing possibilities. As a rubber-powered model it can be equipped with a good folding prop, and the performance goes up con-siderably. The writer lost his Clipper out of sight after fitting a one-blade folder. Equally effective, though more subject to damage, is a good free-wheeling prop.

For sport flying, a lightweight pair of floats may be added to adapt the model to ROW. Any small pond is an ideal place for flying a Clipper equipped with twin floats.

The AA enthusiast will find that the Clipper, equipped with an Infant engine, makes an ideal sport contest model. The engine should be mounted on a thin plywood firewall. just ahead of the windshield. A small cowl made of soft balsa blocks will smooth off the blunted lines of the nose. Keep the CG at 40-50 percent of the wing chord. The Clipper is so light that it may be color doped when using an Infant engine. Just pin down the flying surfaces when they are drying to prevent warps.

The Clipper is basically a beginner's model, but it is adaptable to so many uses it is worthy of any builder. It is a model for fun unlimited." 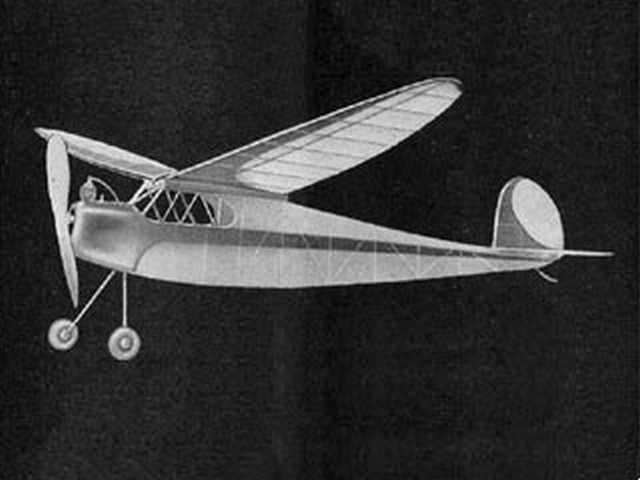