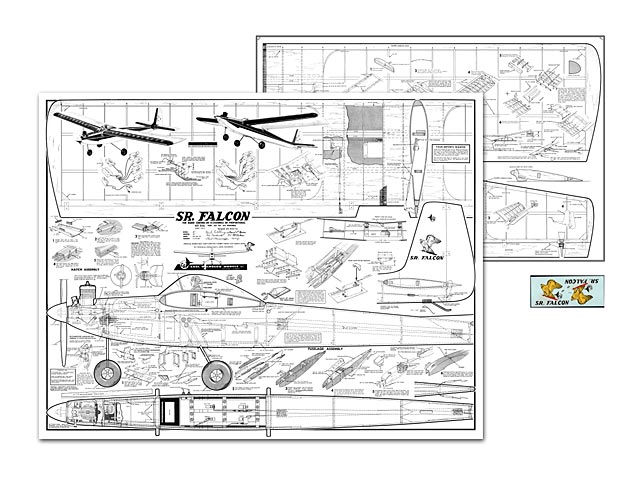 Quote: "Attached the Senior Falcon by Goldberg. No formers but they can be worked out from the plan. This was the larger version of this extraordinary airplane designed by the genius Carl Goldberg. It is important to make the wing spars with hardwood, NO BALSA HERE. Stable, aerobatic and very forgiving as a secondary trainer or a sport model."

OUR Assistant Editor has been flying single-channel for some 4-1/2 years and, after much pondering, decided to approach multi via the Goldberg Sr Falcon as it seemed to have all the desirable qualities - plenty of wing area (810 sq in) and a stable-looking layout.

Being in the happy position of not having to 'go it alone' from scratch, full-house gear was installed at the start, the object being to learn to fly multi the safe way - in short stretches at a comfortable height - the model having been first checked out by the Editor himself and tuition periods being on a 'pupil and instructor' basis. This is definitely the ideal way to learn to fly!

Building the airframe: As we said in our Christmas 1964 issue, the Sr Falcon is one of the most thoroughly prefabbed kits we have had on our building-board. Constructionally, the model goes together extremely smoothly, though we made one or two minor mods. to satisfy personal preferences. The main one of these was the addition of 1/16 in ply nose-doublers, the whole depth of the fuselage, as we did not care for the idea of gluing the bearers direct to the relatively soft 1/8 balsa fuselage sides. We also faced the fuselage bottom to a point just aft of the rear servo position with 1/16 ply so that the servo board could be bolted through the fuselage bottom, from the outside, and be easily removable for transferring to our next project - a multi slope-soarer. We used Spray-stick aerosol contact adhesive for these large areas of ply and found it much easier than trying to spread a uniform layer of adhesive from tube or bottle.

Special care had to be taken in the alignment of the fuselage sides when joining them, since the in. ply doublers around the wing position did not take the required curve so readily as the balsa and tended to distort the sides aft if not constantly watched during assembly.

We liked the method of wing construction very much - the 'Symmet-Tru' automatic jig system obviated all the usual warp worries - although it did seem a little strange having no leading-edge sheeting to do. The massive pieces of shaped, notched leading-edge were, unfortunately, not at all well matched in our particular kit - one being medium and one really rock-hard. The result was that we had to use all the lighter material (main spar, rear spar, trailing edge and aileron) on this side to make the wing balance, and still had to adjust by hollowing the tip more than the other. However, we finally came up with a nice strong, warp-free structure.

The power pack was presumably intended to be built-in, as there is merely a small hole in the former for the leads and, as it is obviously desirable to seal the fuel-tank compartment, there is no access from above. We cut an 'arch' at the foot of the former so that our DEAC 500 pack could be removed for transfer to another model - as is the rest of the gear, switches being omitted in favour of a 4-pin plug, so that there is no 'built-in' wiring in the model at all.

A strong-looking steerable nose-wheel unit is supplied but we were rather mistrustful of the apparently somewhat crude spring-arm link-age. We need not have been: it has proved very effective, though silver-soldering would obviate joint-failure from heavy knocks.

After several years of single-channel experience we are used to having lots of room around the Rx for plenty of foam rubber and were quite aghast at the small size of the receiver compartment..."

Update 31/03/2020: Replaced the instructions file with a much clearer scan, thanks again to Reinhard. 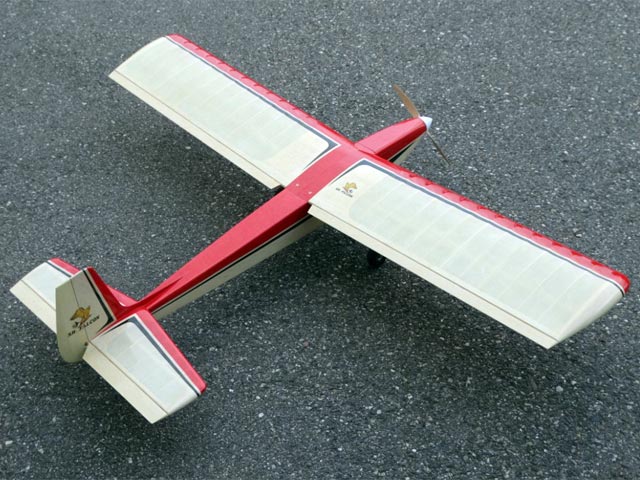