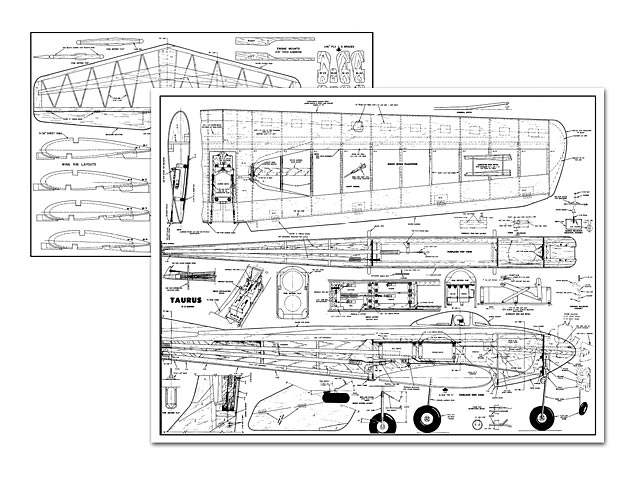 Taurus. Classic pattern plane, for Veco .45 power. Contest winning design. This is the Taurus design as it was first published, in MAN, January 1963.

Quote: "In June '60 MAN we stated that our author's Orion (oz927) was the best multi offered to date - it was! Now we go one step further and state his Taurus is the best. By best is meant just that. A look at the contest record shows that the man in the street in doing the winning.

In the last few years RC equipment manufacturers have made great strides in the development of RC gear. Radio and servo reliability is at an all-time high. Properly maintained, this equipment now allows the modeler to concentrate on the art of flying. During this lime the RC model aircraft has also undergone considerable development. Our objective was to come up with a plane that would perform the maneuvers more nearly perfect, but more important, would be easy to fly.

It goes without saying that smoothness is all important. Our thinking was that if we could design a plane that would fly slower and still do clean maneuvers, we would have the answer.

We see many new designs but are they really different? To change the shape of the fuselage, stab, rudder or wing may give some slight advantage here or there, but we were looking for a design that was really different. After about two years of experimenting, it added up to a lot of building and sweat) we evolved the design we now call the Taurus. What about the Taurus? What makes it different? Let's take a close look at its design.

First, we must remember that to win a contest or master RC flying it is a combination of 65% pilot and 35% airplane. A good pilot can take just about any design of ship and win contests with it. But what about the average flier? He needs a ship with some built-in advantages.

The big difference in the Taurus is the thick wing section. We use a modified NACA 2419. Let's consider the advantages of the thick wing section. A thick section has lots of lift and plenty of drag. We need both. Why do we want drag? If we had a ship that always flew at the same speed, the control response would always be the same. In a full scale airplane the pilot feels the pressure on the stick and by this feel he knows how much control to apply. In a model, we have to judge the speed and beep accordingly.

If we double the speed of a model, the drag goes up four times; therefore the thick wing and its drag tend to fly the model at a more constant speed, The advantage is that we have more it in the ship: making it much easier to fly.

The lift characteristics of the 19% section at low speeds is a big help in landings. We can now bring the ship in slowly over the spot and there is no tendency for the tip to stall with the thick lip section. If you slow it down too much. it just sinks. Assuming, of course, the wing is true.

Another advantage of the 19% section is that it is not sensitive to slight elevator beeps, making the ship very smooth in pitch..."

Update 17/08/2017: Added second article (one page, notes and drawing on modifying the Taurus for proportional control) thanks to davidterrell80, KraftyOne. 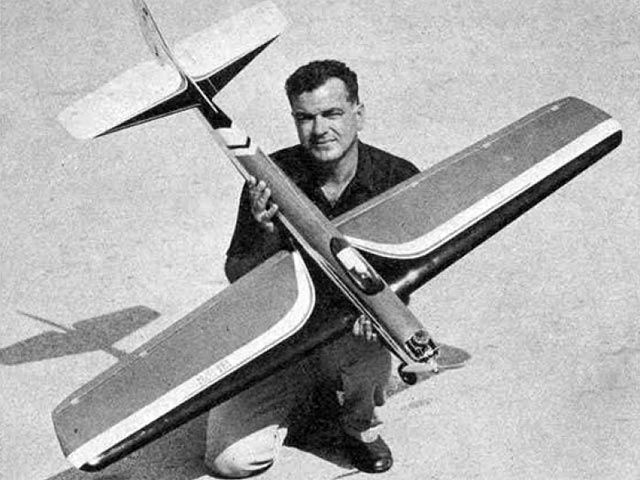 The Taurus was my best RC model of the 1960s It followed the 'Orion' which was also an Ed Kazmerski design. In those days we flew with 'reeds' which were the digital control by the thumbs. For this large RC plane a .45 engine was best but it got a little 'squirrely' with a .60 engine. when we converted to proportional control it flew better with the wings swept back 2 inches on each side. also a .60 engine made it a pretty hot performer. I built a wing that was 10 inches shorter and 4 inch swept back and it was also a good pattern flier but did not land well so I went back to the 70 inch wing and .45 engine. I bought one Top Flight kit traced the parts and built six examples. The plans got pretty ratty but by that time the production had stopped.
JayHelt - 12/05/2014
In case you're wondering where the Andy Coutts pics have gone - they're over here on the Tauri page. Turns out I put them with the wrong plan - sorry!
Mary - 14/10/2016
unable to download plans for fuselage and wing on taurus please advise thanks joe
joe - 04/04/2019
Sorry to hear that Joe. Have you had a look at our "Help with downloads" page: https://outerzone.co.uk/help_downloads.asp?
Mary - 04/04/2019
Add a comment