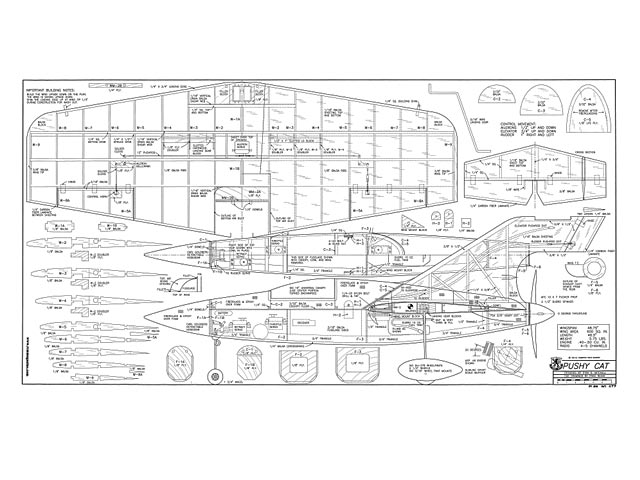 Quote: "The full-scale Pushy Cat is a pusher-prop midget class Reno racer designed, built and piloted by Jim Miller. The model in this article is a Quarter Scale rendition of Jim Miller's T-tailed racing machine.

Being of a pusher configuration makes this plane unconventional for a Reno-racer. Nonetheless, its graceful design and beauty warrant modeling this aircraft for radio control.

The Pushy Cat is not modeled to compete as a Formula I racer, however it does exhibit enough speed to be exciting. In actuality, the shoulder mounted semi-symmettrical wing and tricycle landing gear make this easier to fly and land than many low-wing planes. So While not for beginners, the intermediate pilot with average flying skills will handle this aircraft with ease. The design features are flexible with several configurations possible. It can be built with or without a functioning rudder, can be glassed and painted or MonoKoted, and a retractable nose wheel is also an option - decisions, decisions. Other items that make this plane especially pleasurable are;

(a) The radio compartment is easily accessible by removing the entire top and forward portion of the fuselage with the removal of two hidden machine screws. The top of the fuselage also hides the wing bolts giving the plane a clean appearance.
(b) The aileron, elevator, and rudder servos are all mounted in the wing so that the wing/tail assembly can be removed for transport by simply removing the two wing bolts and disconnecting the servo wires. Under the wing you will find full access to the engine and fuel system. A fuel pump of some sort is recommended.
(c) The fuel tank is over the Center of Gravity so there are no balance problems as fuel is consumed.

The prototype plane shown in this article is version 2. The first prototype was quite simple in comparison. It had no rudder, no retractable nose wheel, no pilot or cockpit, was Monolcoted, and used a stock engine muffler. My philosophy at the time was -
why spend bucks on something that may not be of sound design. My worries were unfounded. The first version of the Pushy Cat flew great and encouraged me to build a deluxe version, version 2.

Construction. The following construction sequence is not meant to be all inclusive and certain instructions may be quite vague at times. The author made every effort to ensure that the correct building sequence was maintained and that the most critical areas of the construction were included.

Fuselage: Cut out the fuselage sides from the 3/16 balsa sheet stock. Pin or tape the sides together and sand the edges to ensure symmetry. Caution - the plans show the fuselage sides to be 36 in length. This was done to allow for a pattern to cut from. The assembled fuselage sides will be slightly less than 36 in due to the curvature of the structure.

Mark the locations of all the bulkheads on the inside of the fuselage sides. Assemble the fuselage sides and bulkheads upside down over the plans using masking tape. Adjust the tape until the assembly is straight and true to the centerline on the plans and that each side is perpendicular to your building surface.

Using 1/4 in balsa sheet, plank the bottom of the fuselage starting at the front and working towards the rear. Glue each plank in place, removing the masking tape as you go..." 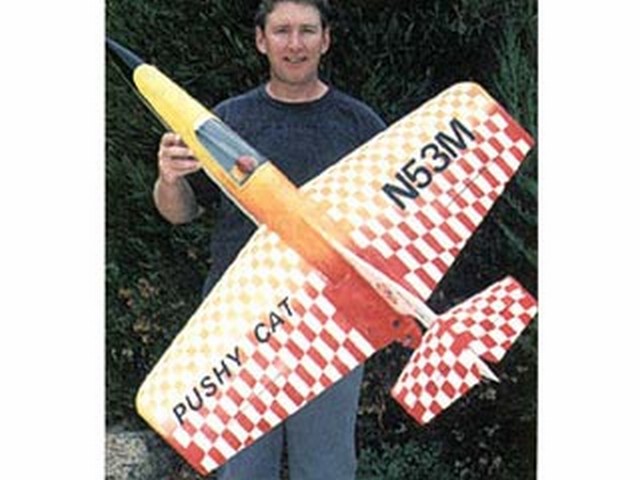