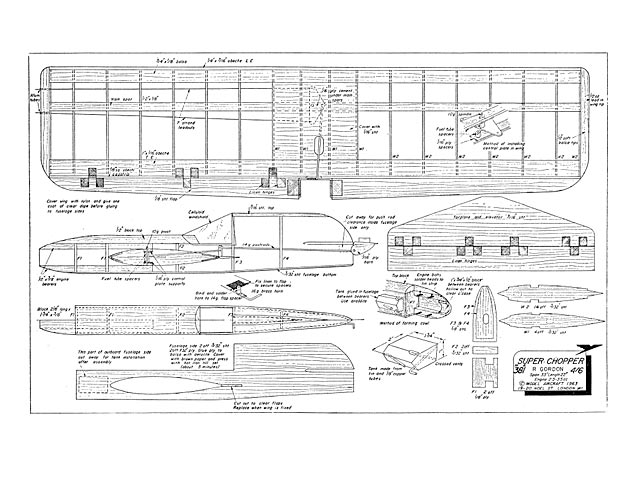 DEVELOPED from a 1.5 cc stunt model which was very manoeuvrable, fast and intended for 1.5 cc combat, the first Super Chopper was entered in a club contest, which it won. Last year it won three out of five club and local contests and a Super Chopper, built and flown by one of our clubmen, took the 'Brian Trophy' from the Five Towns MAC in February of this year. About eight Super Choppers have been built for the present season and more are on the stocks to allow for the inevitable 'wastage.'

The kind of model I had in mind when the plans were drawn up was one that would be smooth to handle, have the speed of a Team Racer turn as tightly as a big stunter and have the strength of a good Combat Wing. I think that Super Chopper fills this specification as closely as possible. The rather thin airfoil and small wing area give good level flight speed and the use of wingflaps enable the model to make sharp smooth turns. The only drawback to the design is, of course, the comparatively complex construction, but if you want a model which will leave the 'Wings' standing, this is it.

Construction. It is advisable to use a good resin glue, not Balsa cement, for all ply and hardwood joints. The wing is built first over the plan and bellcrank, leadouts and flaps fitted. It is then covered with nylon and given one coat of dope.

The fuselage sides are now made as shown on the plan. This method of bonding ply to balsa is easy and the result very strong. The sides are slid over the wings, then the engine bearers and formers are added. A good joint is essential between the fuselage sides and the wing. Now cement the tailplane securely in place and connect up the elevator horn making sure that the elevator and wing flaps are both neutral. Add the formers, fuselage bottom and top blocks, install the engine bolts in place, then glue the cowl blocks to the bearers. Carve the top and cowl blocks to shape, sand fuselage and add celluloid windshield.

Cut away the outboard fuselage side to install the fuel tank which is secured by Araldite. Some Super Choppers have been built with a smaller tank enclosed within the fuselage, but one pit stop in a 5 min combat joust is required if this type of tank is installed..." 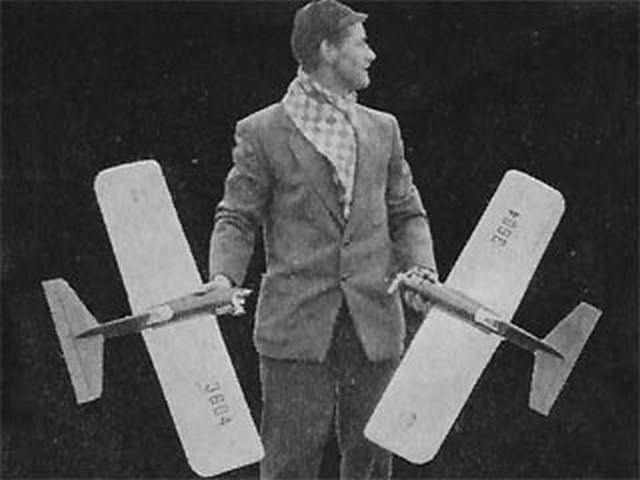