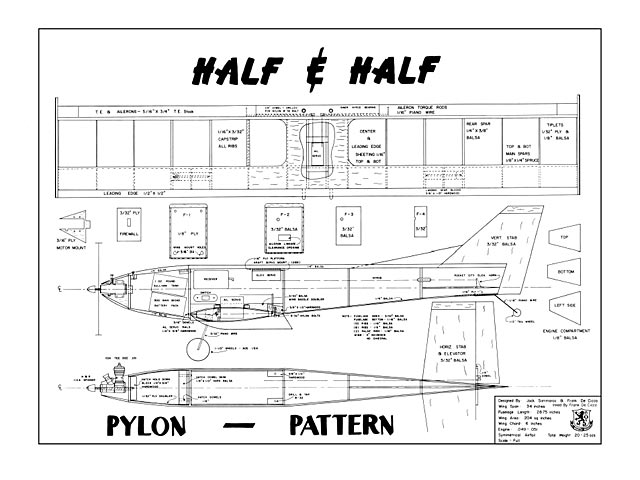 At one of those 'meetings after the club meeting' in a diner in Union, NJ, Pete Morris (current UMAC'er President) threw down the gauntlet for some one-design Half-A pylon racing. Half-A pylon ships started to take shape on UMAC'er building boards and so started an epidemic of Half-A fever within the ranks of the UMAC'ers. Frank and I decided to 'make a few sketches' of a ship to compete with in an Unlimited Half-A race which was starting to shape up.

Well, the few sketches mushroomed completely out of control. Over the ensuing days, we ended up in the cellar consuming great quantities of coffee (by the gallons according to my wife, Carol), paper, pencil lead, time, etc. The adrenalin was really flowing. With X-Acto blades in hand, and balsa shavings and chips all over the floor, the nights flew by, and it was on to the sandpaper and covering. Along about this time the "Half & Half" name cropped up and we decided to christen the ship with it.

By now some of the UMAC'ers were stopping in 'to see how things were going.' I think every club is favored with a couple of these fellows, UMAC being no exception. We have our technical experts, too. UMAC'ers 'technical branch' are the fellows who, because of their trade or inclination, can come up with parts that are not commercially available or maybe just currently out of stock in the local hobby shops. Roman Bittel (D & B Whirlybird - MAN, June '74) stopped in to check on the progress of Half & Half while Frank and I were discussing some of the small parts needed for Half-A stuff. When you have been building .60 size ships, you just don't have stuff that small laying around the shop! Without a word, out came Ro's 6 in steel scale (I think he was born with it), and 2 days later some stainless steel landing gear straps and screws; one piece blind
motor mount plates, etc., showed up.

Later on Henry Orzech (H&F Products) became involved in a discussion about the strength of some hardwood stock sizes for landing gear mounts and also - how do you get those gizmos for 1/16 wire strip aileron rigs? HO said. 'Wait a while and I'll see what I can do'. A couple of days later, the prototypes for H&R Products strip ail-eron connectors showed up with H&R Half-A spinner and miscellaneous other goodies. Steve West decided to brew up some special Zipp Half-A fuel for one .051 to guzzle. This kind of cooperation and exchange of information is something a 'by himself' modeler misses.

Finally, after the dust all settled and one of our 10:30 rounds of coffee was finished off, "Half & Half was com-leted and ready for testing..." 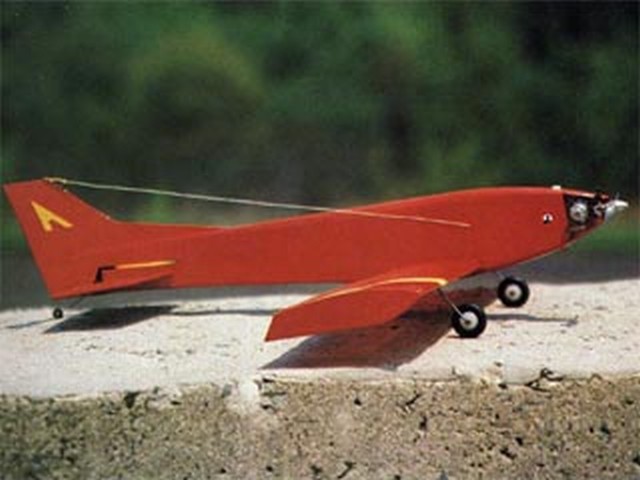