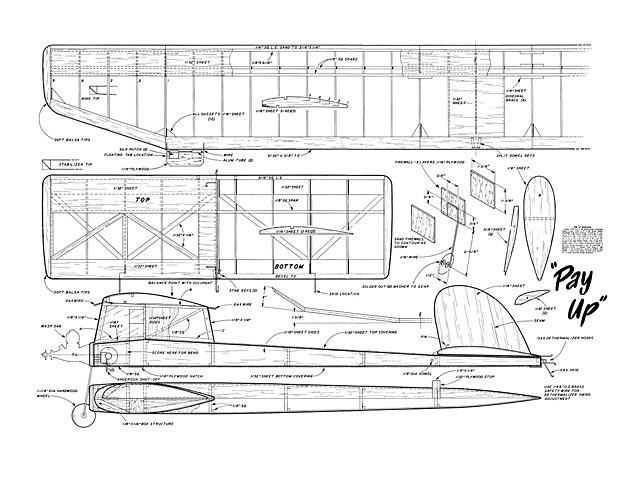 Pay Up was developed from two earlier Half-A payload models. The forerunner of the Pay Up was designed and built early in the spring of 1951. It featured a monocoque sheet balsa fuselage with a one-wheel landing gear. The wing had an area of two hundred square inches and an aspect ratio of six to one. An Eiffel 400 airfoil was used for the wing section and a Clark Y for the horizontal tail section. The model was powered by a Torpedo .049 and had a good climb and glide with a three-ounce dummy.

A second payload model was built a few months later. It was similar in design and construction to the first. The only exception was that it had a higher aspect ratio wing and a two-wheel landing gear. A Joukowski airfoil was used for a wing section and a Clark Y airfoil for a horizontal tail section. The wing area was again two hundred square inches. This model had a better glide than the first, but the rate of climb was lower. Both these models placed in several Half-A PAA-Load contests in Southern California.

Finally Pay Up was designed and built in the spring of 1952 to meet new 1952 Pan American World Airways weight lifting rules. Since a four-ounce dummy was required, the model was designed with a larger wing area to produce a good glide with a low sinking speed. Test flights proved that it had an excellent glide and a fair climb. Basic concepts behind the design of the Pay Up were first, that the model had to be aerodynamically efficient; second, it must be simple in design and construction, and third, it must be rugged enough for contest flying.

A Goettingen 602 airfoil section was selected because of its high lift-over-drag values and its excellent stall characteristics. To insure the maximum lift from the wing, its leading edge was planked.

Fuselage cross sectional area and wetted area of the fuselage were kept to a minimum to get the lowest drag possible. A one-wheel landing' gear was selected for the same reason.

The monocoque fuselage structure employed was found to be the most practical from the standpoint of strength, rigidity, and lightness. This type of structure is very easily fabricated, and can be built quite rapidly, due to the very few structural members required. A conventional wing structure is used, while the tail structure is a little unorthodox. It was found on previous Half-A models that the horizontal tails had a great tendency to warp, even with use of plasticized dope. The tail structure for this model was specifically designed for great rigidity to prevent warping and twisting. So far this structure has not shown any tendency to warp.

General Construction Notes. The fuselage sides are cut from 1/16 sheet balsa and 1/8 square balsa uprights are cemented to the 1/16 sides at their proper stations. The 1/8 square cross members are cut to size and are first cemented to the straight section around the dummy's compartment. After all the cross members are cemented into place including the firewall top, the top and bottom of the fuselage is planked..." 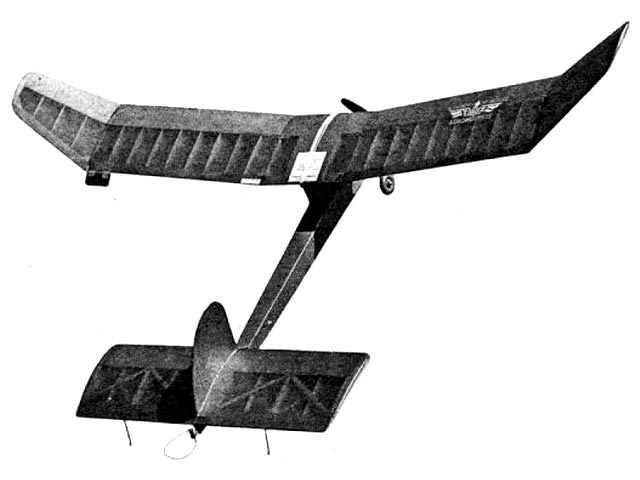