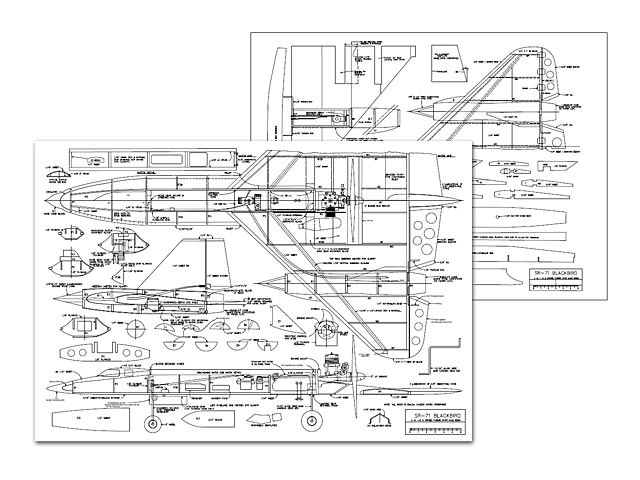 Quote: "After my previous article on the F-117A (oz7403) stealth fighter was published in the February '97 issue, I received quite a lot of feedback from readers expressing their interest in the SR-71, the once highly secret airplane with several world records. Unfortunately, there is no commercial kit of this aircraft available for sport fliers.

I had this project on the drawing board for several years, but it was a difficult job to simplify the construction and to ensure the performance. I saw the ducted fan version; it flew great, but obviously was not suitable for most sport fliers. I was also told that it was unstable at high angles of attack because the main wing is blanked by the wake from the fuselage.

In order to study the behavior of this unique aircraft, I built several hand launched models; the test flights were carried out in my 10' x 10' x 15' wind tunnel. (Just kidding, it's my room that allows me to fly during the cold Canadian winter.) I discovered an even worse problem. It rocked side to side at high AOA (angle of attack), then sank like a fallen leaf. I believe it is the conflict between the fuselage (lifting body) and the wing. At a high AOA, the wing stalls first while the fuselage continues to lift. Thus, the nose keeps going up and reaches an even higher A0A. This is opposite to a canard design in which the foreplane stalls first and lets the nose drop to recover by itself.

These problems may not affect the full-scale aircraft. but it is really a challenge for a scale model. Furthermore, I haven't come across any suggestions nor solutions from the books. Well, one of the advantages to designing a sport model is the flexibility to do whatever I want. Therefore, I shortened the nose and the width of the fuselage as well, and the nose cone was slightly dropped, the cross section is pretty true to scale.

All these modifications improve the model's performance. Another bonus is that the model is small enough to store in my trunk. Since 1 am not interested in high speed, the wing is relatively thick so as to enhance better handling during take-off and landing. It is not practical to locate the engine at the nose or the tail because it might cause severe balance problems. Instead, the engine has been installed at the mid-wing position, and the fuel tank is close to CG point. By the way, I would like to give the credit to a famous designer, Mr. Laddie Mikulasko. He has designed a lot of unique models with a mid-engine configuration; most of them were featured in magazines.

Construction. Due to the unique appearance and flight performance, the model is not recommended for beginners. Experienced builders are suggested to study the plans and this article thoroughly before they begin..."

Quote: "Here's the Jul 2002 SR-71 plans. I traced the original file in CAD so that I could use my CNC router to make a short kit. I build one and it flies very well, except hard to see!"

Update 06/07/2020: Replaced this plan with re-scaled version at correct fullsize, thanks to TonyP. 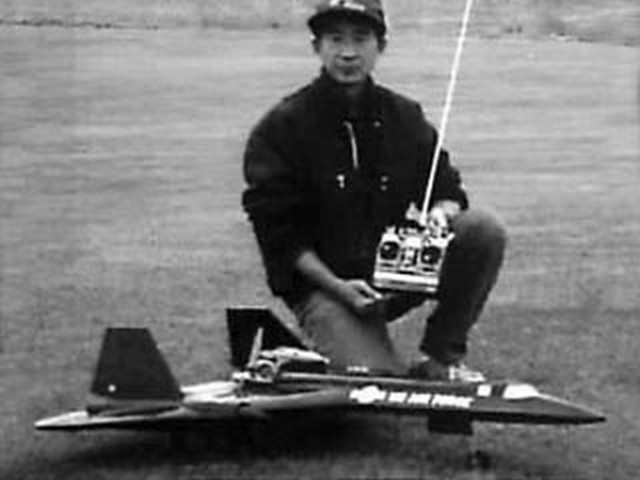 Page 1 of the drawing is not to scale. The 6 inch ruler in the lower right hand corner only measures roughly 5-1/2 inches.
JR - 18/07/2019
I think you're right. But this is a vector PDF file and those are outside my abilities. I'll only mess it up if I try and re-scale it. Anyone got a fix for this, or a bitmap version of the same plan?
SteveWMD - 18/07/2019
The stall was as you described. The outer leading edges of the wing of the Blackbird has a droop to help counter the high AOA stall.
Don - 04/07/2020
Add a comment