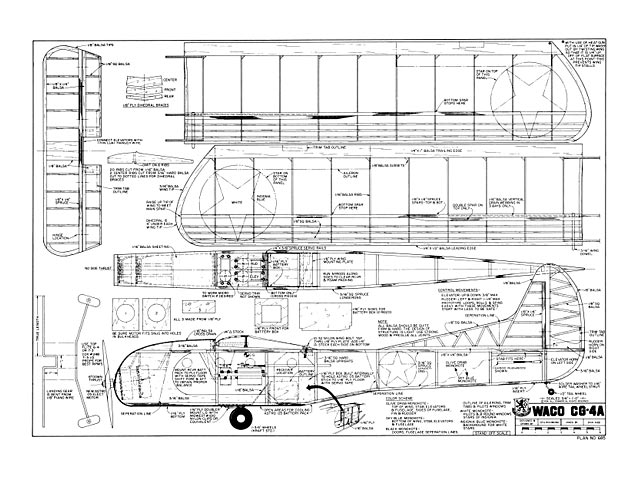 Quote: "These Are The Good New Days. But, in the good old days, we'd spend a dime and get a box that contained everything we needed to build a scale flying model of a real airplane. We'd get fuzzy, skinny sticks of balsa, a lead-like tube of smelly cement, wrinkled tissue paper, a set of wheels turned from hardwood, a hunk of rubber band and other miscellaneous needed parts.

In these good new days, we do spend more than a dime, but now we have radio control - we still build scale models, but we have precision-sanded balsa and spruce, resins and epoxies and miracle instant glues, plastic coverings in colors, molded nylon fancy parts, beautiful scale-like wheels, and the most modern substitute conceivable for the hunk of rubber. Now we have electric power!

If we take the best of the products from these good new days and blend them with an interesting design from 35 years ago, we come up with a radio controlled scale-like, fun-flying, Waco CG4A Cargo Glider from the World War II days of history.

Our CG4A has been the center of much attention. It is super easy to build, requires very little from your pocketbook due to the relative absence of many sheets of balsa wood, and is just plain fun to fly. it ROG's (rises off ground) easily from a paved surface, will do consecutive loops, does fair barrel rolls and spins like a top - all this in virtual silence!

And, after eight or nine minutes, we grease it in for a landing at our feet instead of having to chase it downwind like in the olden days. After ten or fifteen minutes of recharging our electric motor batteries from our Astro Flight Rapid Charger (which hooks up to our car battery), we fly again.

The absence of engine noise is sure to open school yards and parking lots up as new flying fields for many of us.

The real Waco CG4A's were used to carry up to 32 field-equipped infantrymen into combat. Or they could carry a jeep and sixteen men. The jeep was used as a mobile command post for the infantrymen. As many as three of the CG4A's were towed at a time behind C-47 Gooneybirds, which we call DC-3's today. The CG4A's were big airplanes, 84 foot wingspan, built of spruce and plywood, fabric covered (with wrinkles), and a few of them used by the Marines were powered by two gasoline engines attached to the wing struts. The Marines tried to ferry some of these powered gliders from Texas across the country easterly to Georgia or South Carolina so they started the auxiliary strut-mounted engines on the ground, towed the gliders into the air, cut them loose and hoped for the best. Not a single CG4A completed the trip. Engines quit, engines vibrated off, wing struts broke off and, in general, the mission failed. One of our local modeling friends was a CG4A pilot in the Marines, and from him we learned that each flight was almost a controlled crash to earth. He made twelve such descents and none were over five minutes long.

Our model apparently is much more successful. The CG4A program was completely abandoned before the war ended; operational losses were tragic. Our model weighs 42 ounces and is flying at a bit over 12 ounces per square foot wing loading. The completed framework weighed 10 ounces, the landing gear weighs 2-1/2 ounces, the covering added 2-1/2 ounces, our radio system added 11 ounces and the Astro 05 power system weighs 16 ounces. You could probably substitute any Cox 1/2A engine and have success and fun, or you could omit all power, put a tow hook under the leading edge of the wing and hi-start or winch it up, and with the wing loading under 7 ounces per square foot, you'd certainly out-fly the full scale glider. Or you can hi-start the model to altitude and then turn on the electric power and continue to climb!

We chose to use three servos - - -rudder, elevator and an on-off micro switch to control our propeller. With some Yankee ingenuity, you could op-erate the prop at high throttle, drop the landing gear at middle throttle (the real one was designed to jettison the gear after take-off) and at low throttle, you could open a door and drop tissues, bubble gum, or parachutes.

Construction is very conventional and simple and, if you'll study the plans and photographs, we think you'll agree. But a few extra paragraphs are worthwhile. Our model mounts its Astro 05 motor through two pieces of plywood. The plastic end of the motor is slightly smal-ler than the outside diameter of the mo-tor, and the plastic end nicely fits into, and is stopped by, the rear piece of plywood. If your motor is one of the newer ventilated ones as ours in the picture is -it has four cooling holes cut in the metal case, then the model does not need cooling vents..." 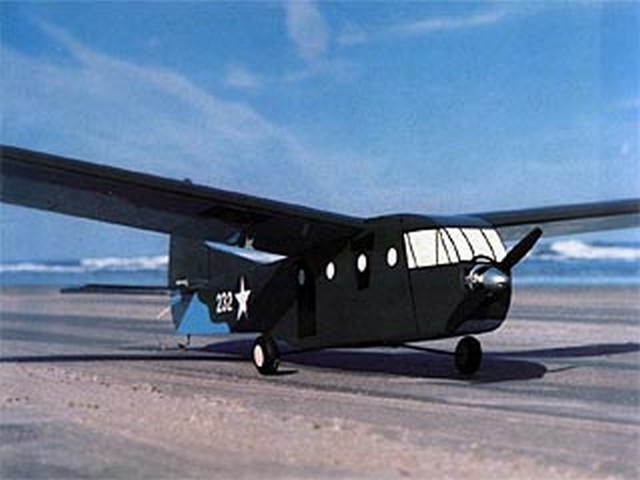