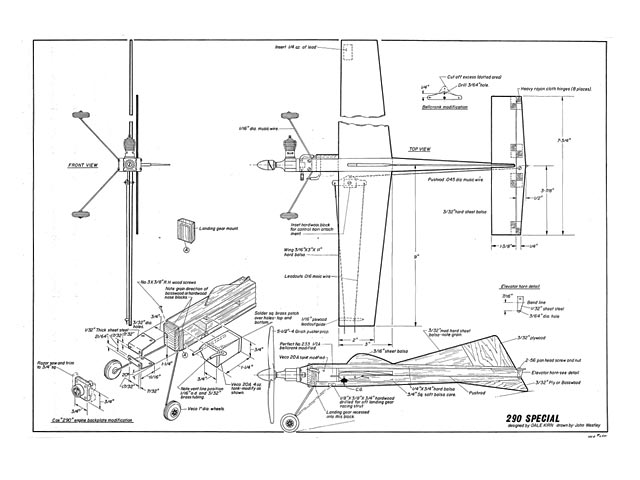 Quote: "To the best of my knowledge, here is the first 1/2A control line plane designed especially for the Cox '290' .049 engine. It is not only an excellent trainer, but it is the least expensive 1/2A Proto plane (semi-profile) that a Junior can build and expect decent performance from.

So what's with this 290 jazz? Actually, it is an outgrowth of the Cox 190 engine, designed in 1961 for their Shinn plastic ready-to-fly plane. Today, the 290 is the replacement engine for all the Cox ready-to-fly planes that require an engine without the tank being an integral part of the engine.

At first glance, you will notice that the crankcase and cylinder look like the ones used on the famous Babe Bee. Well, you are right - almost that is. However, the 290 cylinder has two by-pass grooves - thus making it more powerful than the Babe Bee. And with the Tee Dee .049 'trumpet' glow head (part #1702) you have more power than a Medallion .049, and almost the power of the Space Hopper .049. Check Chart #1 for comparative RPM's of these engines.

There were several different production versions of the 190 series engine. The first one used one bypass groove in the cylinder and was used in the Bendix Racer, P-5I Mustang, Super Cub, and the L-4 Grasshopper.

It was found that additional power was required for a few of the heavier ready-to-fly planes such as the Stuka, Helldiver, A-25 and the T-28 Advanced Trainer. All of the engines in these planes use two bypass grooves for the cylinder porting and the power is noticeably improved. The standard 290 engine is equipped with a low compression head - like a Babe Bee.

The type of needle valves used has changed several times. The first ones were solid brass with a tension spring and washer. For some time many needle valves were a two piece affair with a yellow poly propylene extension molded over the brass thread portion. No spring was supplied with that set-up, since a slit was cut in the threaded area and filled with nylon. It worked fairly well, but after several flights would not hold a setting. The latest version is a one piece brass needle valve with a spring (no washer this time). A longer brass needle valve is used in the A-25 and T-28, but is hollowed out for lightness..." 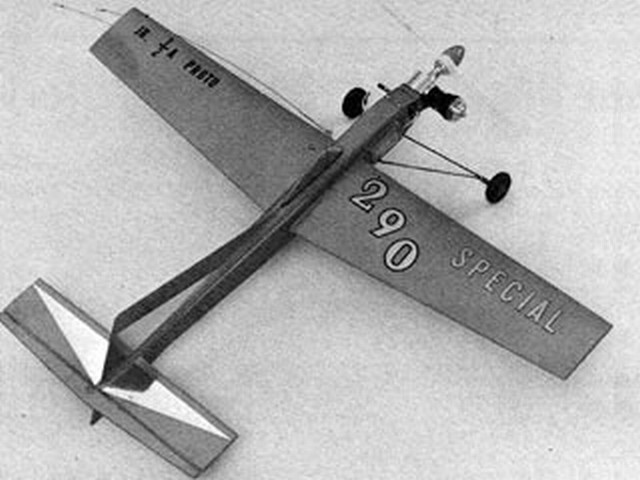