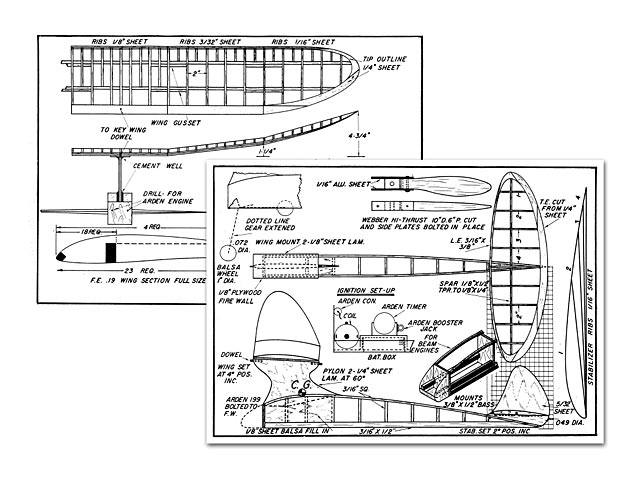 Quote: "Meet the gassie that placed first in the Mirror's Class A free flight event in Beth Page, LI. Light as a feather in the breeze. Has folding prop. Rises straight off its tail to take first honors. The Phoenix, by Frank Ehling.

IN DESIGNING the Phoenix, my primary aim was to get a ship that would not only have speed but be able to climb straight up at as steep an angle as possible. This was the state of my reasoning after attending many model meets. I was convinced that a steep climb would not only keep a speed job from flying OOS but would also give it better gliding opportunities. This meant building as much lift as possible into the design of an airplane - a feat I accomplished by using a pylon to get the wing high plus a generous amount of dihedral.

But that wasn't all that was needed. It takes plenty of power, in addition to design, to send a plane zooming like a homesick angel and I selected the Arden .199 to supply it. Then, in order to get the .ship to climb steeply and not loop, I incorporated a lifting tail.

When I finally took the Phoenix out for tests, she lived up to my highest expectations. Over and over again she demonstrated; in a spectacular manner, her ability to climb. She virtually zoomed vertically when set on the rudder and released, and would continue to climb in the same direction as if as if jet propelled.

Now, if you want to build a contest winning Phoenix for yourself - follow the plans on the succeeding pages. Start first by enlarging them to the dimensions as shown. One side may be built atop the other to insure perfect duplication. While the sides are drying, your pylon can be constructed by securely cementing two sheets of 1/4 in stock at an approximate 60 degree difference from each other. This is the best way to obtain greatest strength from a given amount of wood. Be sure, however, that the cement has dried thoroughly before removing from jig otherwise the pylon will warp.

When absolutely dry, the pylon can be cemented into place. Here again, care must be taken to insure perfect pylon alignment. The top of the pylon should be cemented in place making sure that it is set perpen-dicular to pylon in T formation.

In cutting the wing ribs from the plan, note that their thickness changes. This is done for greater wing rigidity. Cut out wing tips and cement together. Then add wing ribs along with the spars and at same time cement gussets in place to maintain dihedral..."

Hi again, Steve - Another one - from the May 1947 Air World Frank Ehling's The Phoenix Class B free flight gas. Scanned directly from my issue of the 5/47 issue of Air World. Submitted by jeff mccammant story city iowa. thanks... 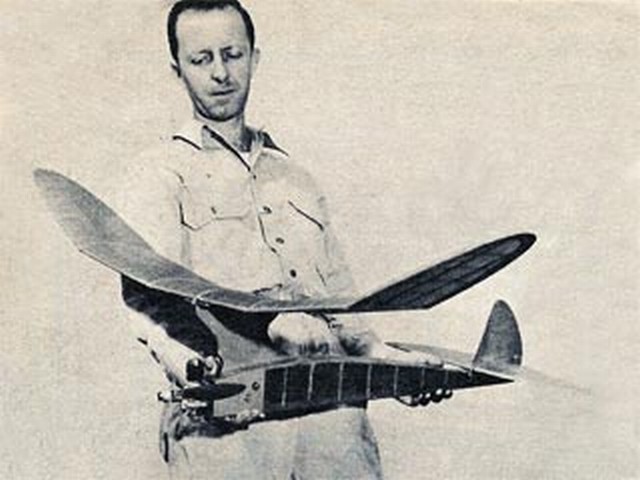