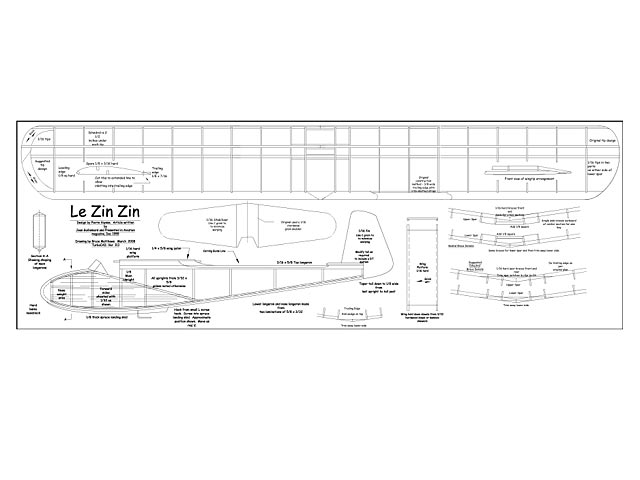 Quote from GeeW: "The design dates from a series of articles spread over 5 issues of 'Aviation Magazine' a French weekly publication with the first instalment published on 8th December 1955. The first article covered the materials required and introduced the design goals and dimensions. The second gave the plan for the fuselage and fin and construction thereof. The plan for the wing and tailplane was included with the third article in the series; with readers left to build it over the Christmas and new-years school break before the basic flight trimming was discussed in the following edition. The concluding article was printed in the 19th January and gave information on tow hook placement, towline launching and details with plans for a very simple high start.

Pierre Vaysse designed the Zin-Zin, with the articles being written by Jean Guillemard. Pierre Vaysse was known in French modelling circles for his model world altitude record holder (1828 metres in 1945) 'Bossu' design and for his work in the full size gliding movement.

Jean Guillemard was also a well-known model designer of the times, amongst which his simple power DAD (oz5045) design was particular favourite for a generation."