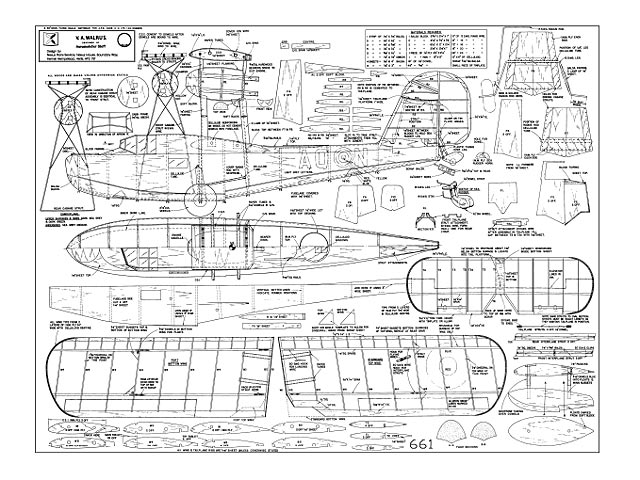 Quote: "Amphibious model of the famous 'Shagbat' for .75cc to 1cc engines.

The Walrus always has been an elusive scale model subject. Numbers of people have attempted the design, and found themselves in trouble with the centre of gravity position, thrustline, etc., and now, happily, all these problems are solved in this model for small diesel engines.

We were attracted by HJ Wright’s model at last year’s All Britain Rally, Radlett, and it is his design which has provided the basis for the scale model presented here. Semi-symmetrical airfoils, upthrust on the engine, and simple sheet fuselage construction with knock-off wings from a rigid centre structure, make the Walrus a most attractive model and one which can be operated over land or water.

A year or so ago I met up with an old ex-Glevum (Gloucester) club member who now resides in the little town of Lochgillphed in Argyll. Bryan Passy is one of the few remaining members of my old club who is still very actively building traditional vintage models of all types from Indoor to Control-Line pulse jets and multi-engined powered scale models.

In his modelling den, Bryan had a diesel powered free flight scale Vickers Supermarine Walrus, the second that he had built from the the AeroModeller plan first published with the May 1957 issue. He had achieved no success trying to get his first Walrus to fly and this second one, he told me, also appeared to be a dodo.

Bryan was sure that I could succeed in getting the beast airborne if I took it away and worked at it! So I accepted the challenge on the understanding that would convert it to electric powered radio control.

THE FULL SIZE AIRCRAFT: Now the Walrus is a strange old bus and you either like it for being so, or simply dismiss it as an 'ugly beast'. Surprising then that the man who designed it for Vickers Supermarine in 1930 was no less an aircraft designer that RJ Mitchell who, only a few years later, came up with the Spitfire.

The aircraft, which entered service with the Royal Navy in 1935, was unique for the time in being the first British squadron aircraft to have a retracting undercarriage and completely enclosed crew accommodation. Folding wings were another innovation and the experience of water spray problems on tractor engines prompted the choice of engine location. (Not many people know that!)

There is a nice example of the full size aircraft in The Fleet Air Arm Museum, Yeovilton, Sommerset. However, back to the model.

FREE FLIGHT TO R/C CONVERSION: I was starting with a fully finished model built as per plan and I will deal with my mods while suggesting alternative ones if starting from scratch. The structure is very robust for a free flight model and only a few things need beefing up to take the strain which might result from the addition of R/C equipment.

The wing joining dowels etc, were changed to plastic tubes, but kept fairly short to allow for 'knock-off-ability', with rubber bands pulling the wing halves onto the locators.

The model weighed in at just under 2lbs without its engine, so I chose a FUSION 2829/10 brushless motor, matched to a 3SP LiPo 850mAh battery, plus a couple of 7gm servos and a 2.4 GHz receiver to fly the beast. The wing loading of around 10ozs/ sq based on the total wing area, of the 38 in span wings was nothing to get worried about, I felt!

The model was so well finished that I wanted to minimised any butchery to it, so decided to use rudder and all-moving tailplane as primary controls, in much the same arrangement that I had used to convert my free flight Miles Kestrel (See Feb 2007 AMI). Briefly, what is done is that the tailplane is made 'all-flying', with tension provided at the leading edge so that only a pull is required on a line to the servo.

The Kestrel was easy, since the tail was already pivoted for trimming, but not so the Walrus, the tail halves had to be cut from the centre bay and the latter glued to the top of the fin. A 1/8 in root rib was added to the tail halves at the T1 position. Two full-depth spars were added 1 in from the LE between T3 and T1, spaced to take a tube for the tail mounting rod. I used a aluminium knitting needle of about 2mm diameter for the rod, but carbon fibre would be a good alternative . A matching tube was fixed into the centre bay on the fin, allowing the tail halves to be plugged on, ready for the control line. The latter is attached to a 16g wire which is located in a tube in the tail halves at the back, to cross a few mm behind the rudder post. The photos of the set-up should make it clear (I hope!).

The operating line for the tailplane passes down the fin and through a nylon bush at the base to the operating servo. Both the latter and the rudder servo were positioned just below the rear gun hatch. The line to the tail is always under the tension provided by rubber bands that pull down on the leading edge of the tailplane halves.

The rudder was cut free and hinged to the fin post without too much trouble and then connected to its servo by closed loop wires.

BUILDING FROM SCRATCH: If you are starting from scratch, you can build in the elevators to scale outline. In that case, you will then need to use a couple of bellcranks/snakes or perhaps a mini servo in the fin to operate them. Some may go for 'full-house' control and incorporate ailerons. That would enable the dihedral to be reduced to the true scale angle and probably deal with the 'Dutch Roll' tendency at low speed (I'll comment further on that later). A servo in each wing would be my choice for that approach.

MOTOR ETC: The outrunner electric motor was relatively easy to mount, requiring only the engine bearers to be sawn off flush with the pylon mount and for the motor to be screwed on. However, some thought was given as to what the thrust line should be. The most important consideration is the angle that the propeller slipstream meets the tailplane, which appears to be at about a zero angle on the full size machine. So I decided that I would set the thrustline to..." 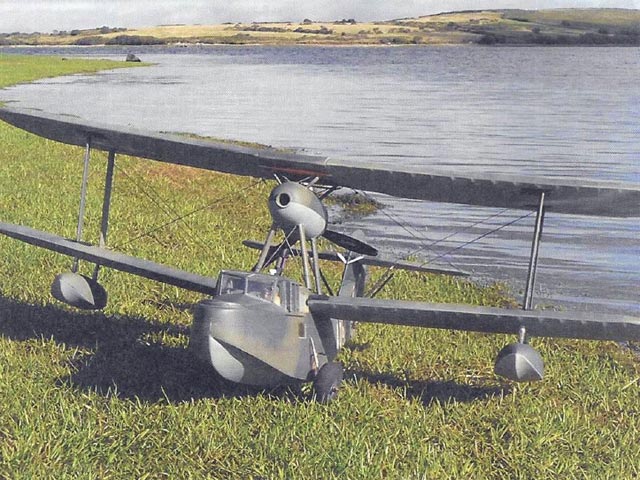 The CG on the plan is shown as behind the step. I know from bitter experience with my 54" span RC enlarged version that this is way too far back. How the free flight one flew in that state I've no idea! After a furious 10 seconds I set mine the same distance in front of the step and it was at least better, if not good!
Mike Roach - 30/08/2021
Add a comment