Quote: "A magnificent stand-off sport scale model of the front runner of the Golden Age of air racing. This .61 powered beauty of Art Chester's Jeep flies the way you wished all R/C models flew. By Colonel John A de Vries and George Fischer.

For a while, it lay cut up and brutalized. What was once a truly unique racing airplane had its slim Menasco engine wrenched from its mounts and a flat Continental welded in its place. The free-flowing streamlined landing gear was hacked off and two stubby hunks of steel, carrying a couple of chubby air wheels, substituted. The ugly modifications were made so that the "Jeep" could meet the rules for 'Goodyear' racers. But, today, all of that is being changed. Art Chester's beautiful racer is being restored to its original glory. Mr. Henry Proescher is rebuilding the 'Jeep' for the EAA Air Museum.

During air racing's Golden Age, the Jeep was always a front-runner. Under the sure hand of its designer and builder, Art Chester, it showed the way around pylons from 1932 to 1937. Only when the more-powerful "Goon", with a six cylinder Menasco, fancy French Ratier propeller. and retractable landing gear was ready to burn up the race courses did Chester sell his Jeep.

Our Stand-Off (Sport) Scale is slightly larger than 1/4 size of the real Jeep. The scale, 3-1/2 in equals 1 ft, puts the model into the Monster Scale category although the wing span is a reasonable 60 inches. Power is provided by a .61 - and a reduction drive isn't necessary! The 850 square inch wing and the tail surfaces have been enlarged a tad from dead-on scale, but it'll take a good ruler and a sharp eye to detect the divergence. There are a host of good scale references. John Underwood's The Art Chester Story has some superb pictures of the Jeep and the British Aeromodeter Jeep 3-views (available from Bob Holman) show the plane in its various incarnations. Hirsch drawings are also good for your scale presentation.

Our model isn't too complex, as scale models tend to be. But, it isn't a two week project, either. George Fischer, who built three prototype models for this article, took 12 months to produce them - but, in the process, taught himself how to produce magnificent fiberglass parts. If you've built and flown four or five A/C models you won't have any trouble building and flying the Jeep. 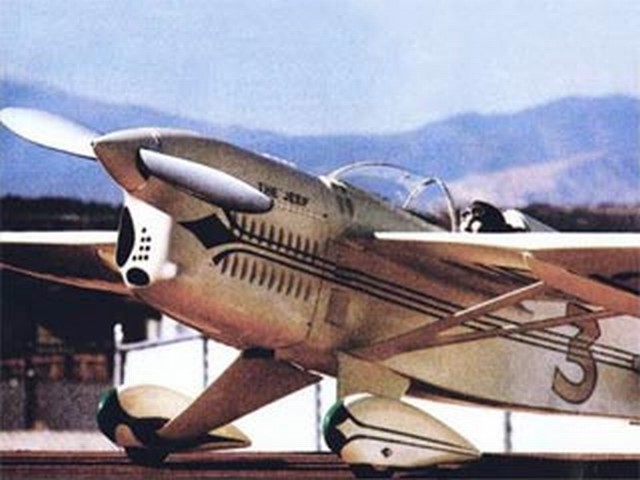