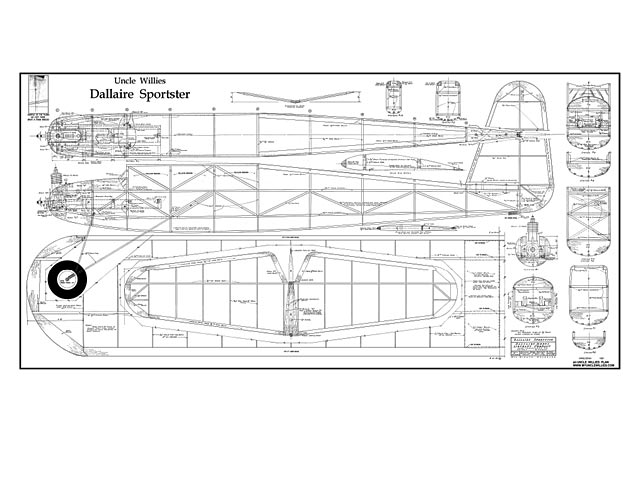 The Dallaire Sportster was designed in 1935 by Frank Dallaire for the Stix Baer National Contest held in St. Louis, Missouri. Frank flew his design to second place in open age gas in the Rise Off Ground (ROG) category. Since 1935 the Dallaire Sportster has won countless contests and titles. Back then the Dallaire Sportster came in a four-foot paper bag which held all the wood necessary to build a 108-inch freeflight model. Today, your mod-el comes in a sturdy box with all the neces-sary wood, a full-size plan sheet, and an eight-page set of instructions.

The Dallaire Sportster is not a beginner's model but, if the modeler is into building, this can be a great learning experience. After all, those of us who started modeling be-fore Almost Ready to Fly (ARF) had to build our own planes.

Where do you find a Dallaire Sportster kit? One place is on the web at Penn Valley Hobby Center's site http://pennvalleyhobbycenter.com. The other is in the actual Penn Valley Hobby Center, located in Lansdale, Pennsylvania. Before moving to Florida from New Jersey, I visited the Penn Valley Hobby Shop on several occasions. Each time it was like I was back in my youth; the store contains all manner of wonderful items - plane kits, boats, cars and trains and more.

One of those wonders was the Dallaire Sportster kit now being manufactured by Shive Specialties. A 75-year-old design still in production; how's that for staying power?

Getting started: Well, now that I have told you where to buy a Dallaire Sportster, let's build one. Like most kits it comes in a large box and is packed with sheet balsa and sticks that will become a beautiful model. Since the kit comes with only one full-size plan sheet, and it is used to build on, I decided the best thing to do was to go to the local print shop and make two duplicate copies - one to build on and one as a back-up. Before starting to build the model you have to decide if you are going to make the wing one or two pieces and if you are going to make it gas or electric. The plans are drawn for gas power but a conversion to electric does not look like it would be much of a challenge. The cabin of the Dallaire has plenty of room so, if electric is your choice, go for it.

Empennage: After looking over the plans and instructions I decided to start with the rudder and elevator assemblies. The hori-zontal stabilizer, elevator, vertical fin and rudder are built over the plan. All the ribs on both the elevator and rud-der are made from 1/2 x 1/2-inch basswood strips. The leading and trailing edges as well as the wing tips are formed from pre-cut balsa. Since the instructions are very basic, the designer has drawn on the plan an outline of all the major pre-cut parts, which makes identifying them easy. It is also handy if an error makes replacements necessary. This is a good time to remind the reader to plan ahead for the growth of your model. The few replacement parts I have needed so far have been due to moving my model and hitting into something. The horizontal stabilizer, when finished, is as long as some 40-size models' wings.

Now is a good time to line up the elevator and horizontal stabilizer and mark them for the location of your hinges. I used 3/4-inch by 1/2-inch CyA hinges. Since you will be cutting into basswood use caution as this is tough wood and does not cut easily. To make this task easier I scribed a groove at each hinge location to help start my cut and then lined up my Great Planes Slot Machine and proceeded to finish cutting through.

Wing: Next I went to the wing. After deciding to build a two-piece wing, I then had to figure out how I was going to mount the wing halves to the fuselage. The plan only shows the left wing; however, the only difference between the left and right wing is the placement of the wing tip formers. So take your time and make sure you place the wing tip formers on the correct end. The wing ribs come pre-cut and are easy to put in place..." 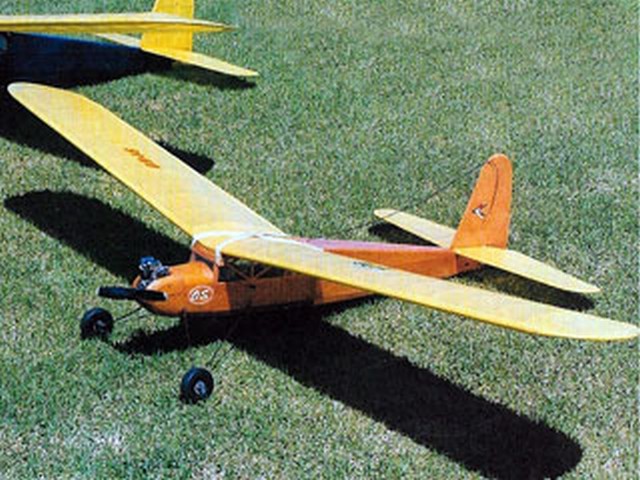