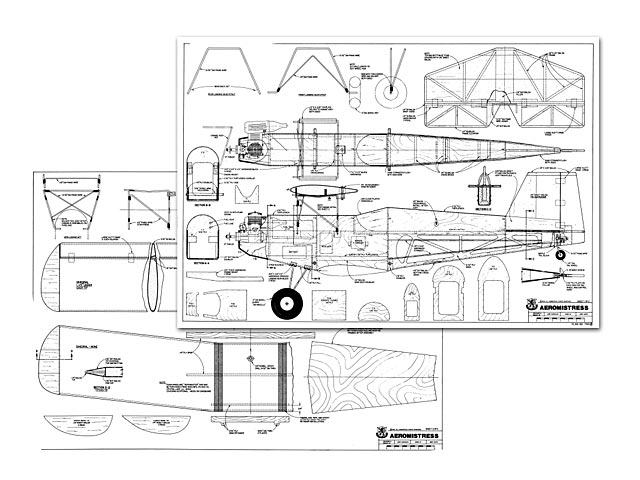 Quote: "This article probably would have never come to be if Bruce hadn't lost a wing on the maiden flight of his brand new Aeromaster (oz1971). Bruce is a member of the QCRC. It seems that Bruce was trying to do some sort of aerobatic maneuvers when the top wing blew off and, in turn, took the rudder with it. The rest was the classic swan dive. How or why the wing decided to solo, no one really knows. Old rubber bands, etc, etc. The only complete part of the wreckage was the top wing which, being relieved of its burden, came down last.

As we looked over the wreckage, Bruce decided it was beyond repair. The cabane ripped out on one side (maybe it ripped out in the air?), the stabilizer was gone and the lower wing was shattered. I was on my way for matches and marshmallows when someone remarked to Bruce: 'Bet Larry could make it out of plywood - Hey, Larr, want an Aeromaster body?' I reluctantly threw the debris into the trunk. Some nights later I decided to see how this airplane was built.

I extricated the body and did a little pushing and gluing and suddenly realized the body wasn't too bad. The Aeromaster is a well designed plane.

I rebuilt the fuselage, made a new empennage and decided to try foam wings. Having never tried to build a foam wing, I was reluctant. I weighed the built-up wing that was still intact and then weighed the components for the same wing as supplied by Wing Manufacturing. I was surprised to find I could build a foam wing that was actually lighter than a built-up wing. I built one set using the Wing manufactured components and another using balsa sheet for covering instead of the material supplied by Wing Manufacturing. By being careful to use the contact cement sparingly and using light balsa of 1/16 thickness, I came out with a considerably lighter wing. This being the case, I might be able to build a fuselage mainly out of plywood and the total weight would be the same. I finished rebuilding Bruce's bipe and flew it. I had never cared much for bipes and, after flying it, I still didn't.

I let all the hot shot Aeromaster pilots try it out and they said it flew great. I was used to something more aerobatic, so I decided to make some modifications to this popular design.

After having designed a plywood structure for the fuselage that reduced the number of components and simplified construction, I went ahead and cut parts for four Aeromistresses simultaneously. If one flew, I wanted to be sure of repeatability. When I completed the first, I was sure I had a highly aerobatic biplane. The first design had the top wing the same span as the bottom. I then completed Number 2. This time I used the standard upper Aeromaster wing. This made the airplane more docile and still very maneuverable. In construction, one of my main concerns was to build the cabane so that I could plug the cabane in as a unit. I wanted to be able to finish a fuselage completely, then attach the cabane so that it was a permanent unit. The way I did this was to build the cabane as a unit by leaving one cross piece on the front of the cabane unsoldered and doing the same with the rear cross piece. By doing this, I was able to 'spring' the cabane apart far enough for insertion into four holes into the fuselage. After the cabane is in place, the front and rear cross pieces are wrapped and soldered on the fuselage.

Another innovation was to have the top wing removable by using one nylon screw. I did this by using a swiveling block that is threaded. The block is attached to a rear cross piece and, as the screw is tightened, the piano wire cross piece is pulled up exerting a continual spring force on the wing. The block comes into intimate contact with the wing and the shearing force is very high. The single screw is effective for any aerobatics but, at the same time, will shear under impact before much damage is done. I avoid the use of nylon bolts in the bottom wing because the lower wing is usually hitting on tips, etc and rubber bands are more practical.

I know the fuselage is somewhat heavier than the standard configuration, but the strength to weight ratio is extremely high. On some of my early flights I was having trouble with the elevator hinges. They were sliding in and out of the stabilizer and I didn't spot this immediately. This caused three 'landings' that, in one case, knocked the landing gear and top wing off; in another case, bent the prop shaft and shattered a lower wing. The fuselage structurally was undamaged. The same semi-crashes would have definitely required major repairs had straight balsa construction been used. 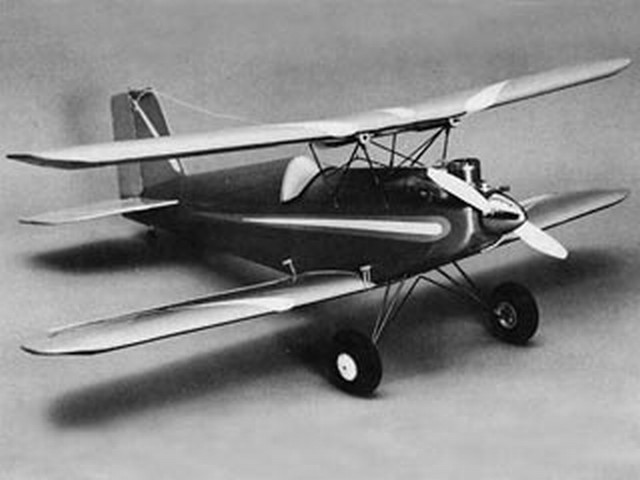