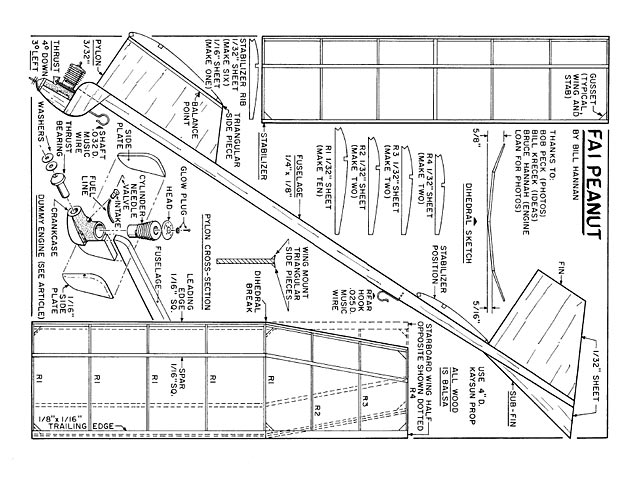 Quote: "How about this switch - a model of a model? Here is a fine out door rubber-powered version of an FAI Power bird. FAI Peanut, by Bill Hannan.

How about a model of a model? Back in May 1954, an article called 'Models of Models,' written by Paul Gilliam appeared in Model Airplane News. Included were photos and full-sized plans for tiny gliders resembling larger 'gas' models. During a visit with Bill Krecek, we had an opportunity to see one of these delightful models first hand, which gave us the idea for a similar, but powered form of mini-model.

Our example was not intended to represent any specific design, but using the basic ideas, one could build a miniature version of almost any FAI or competition-type Free Flight model. Our main objectives were simplicity, low cost and reasonable realism. It would be quite feasible to construct a more nearly 'scale' fuselage, which could contain the rubber motor, but we chose the direct (easier!) motor stick approach. Only a minimum of materials is required, many of which can probably be found in your scrap box.

Fuselage. Select a light, but firm, piece of 1/4 x 1/8 in balsa for the motor stick and cut it to the shape shown on the plans. Starting at the rear rubber retainer hook, taper the fuselage gradually to meet the 1/32 thickness of the fin, as viewed from the top. Cut the pylon to shape from 3/32 in sheet, noting the direction of the grain shown..." 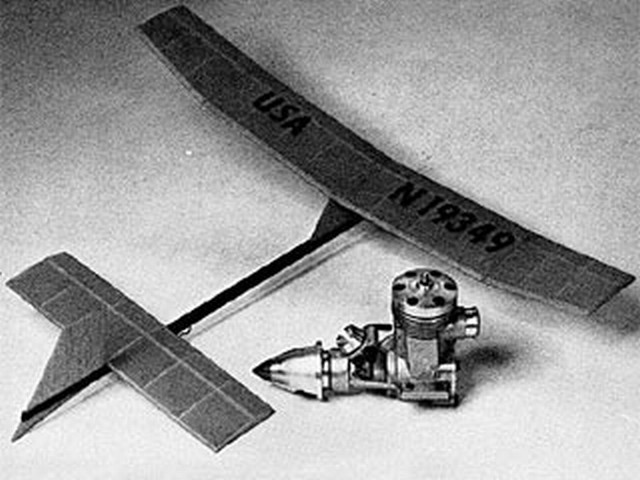