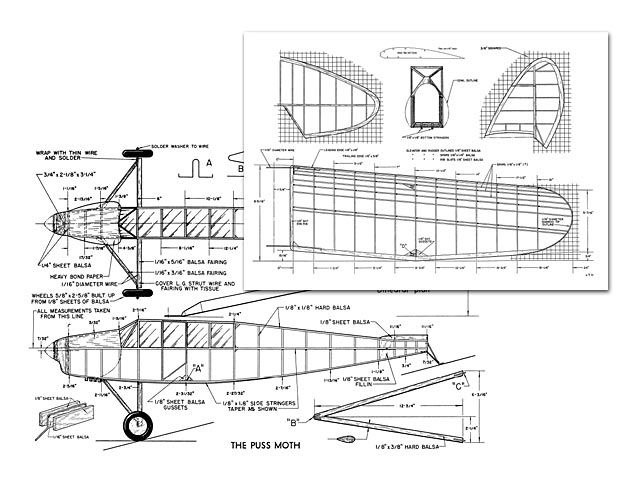 Quote: "Hi Steve... Here is the Lanzo Puss Moth 51in as published in the 9/47 issue of Air World. The scans are from my original issue. AW published the model with a flat bottom airfoil, the original model used an RAF 32. From jeff mccammant story city iowa. Thanks."

Quote: "HOW ABOUT building a crate that has placed no lower than third in every contest entered in the last eight years? This ship has made flights up to as high as 26 minutes out of sight and can turn in consistent flights.

At the Akron State Championship meet held last year, the Puss Moth brought home the Wm. O'Neil Perpetual Trophy after taking first in this event for three successive years. In spite of the high winds at the Wichita Nationals last year, the ship gave a good account of itself and took high time in the scale event.

The Moth meets all AMA rules for flying scale competition and still hews closely to all the char-acteristics of the full size plane deviating only where it has hindered the flying qualities involved.

One of the most important of these qualities is stability and this the Puss Moth really has. Some of the other qualities are accounted for by the combination of a large prop for a good long climb, folder for an excellent glide and large wing area (300 sq in) for lift. Without doubt, the model has everything it needs to break the tape at any contest.

What is more, the Puss Moth, because of its simple, rugged box construction is easy to build - a very important factor when droopy eyelids and strained backs come in the wee hours before a 'brawl.'

Start by bending the 1/8 sq fuselage longerons to the shape shown, over a steaming tea kettle. This will avoid warping later. Then pin the longerons into position over the scaled up plans. Be sure to use hard balsa for these parts. Next place in the 1/8 square upright, glue and allow to dry. Make two sides at once so they will be exactly alike. After drying, remove the sides and connect, the top and bottom cross pieces in place at the window section. Now pull the rear of the body together and set in the remaining cross pieces. Join the nose in the same way and then glue on the carved block for the motor cowling. When the square section of the fuselage is completed, the 1/16 x 3/32 bottom and side stringers may be glued in, bottom stringers running the length of the fuselage and side stringers from the back of the cabin to the tail.

The landing gear is made of 1/16 music wire streamlined by adding the 1/16 sheet strips shown on plan and covered with Jap tissue. Sandwich the top part between two sheets of 1/8 balsa for strength before gluing into the body.

Round out a 1/4 sq length of balsa and cut to length as shown. These represent exhaust stacks.

Glue the wing strut hooks in solidly since they take a beating. Two sheets of bond paper are used to form the motor cowling duct but don't glue these on until the model is covered.

To construct wings, first cut all the 1/16 balsa ribs to shape from the templates. Then pin the leading and trailing edges into place on the plan. Glue all the ribs in position and then set each spar in the slots on top of the ribs. The wing tips are of 1/16 square bamboo. Form them over a hot tin can, steaming kettle or candle. After the wing panels are sanded to remove all rough spots, assemble them to each other with two short strips of 1/16 music wire. Then dry after which you may put the 5 in dihedral into each wing.

Tail surfaces are of the simplest design. Using 1/8 sheet, cut them out of the complete outlines and pin them to the plans. Taper the main spars and then glue in 1/16 rectangles for ribs. These rectangles are later rounded to an airfoil shape. The wing struts are made from the sizes indicated. Be sure to anchor all the wire hooks in place solidly. These struts are held onto the wing and body by small pieces of soft iron wire such as a hair pin.

Next comes covering. Apply nitrate dope to the wood parts with a small brush and then cover with red Jap tissue, Trim off the excess of paper with a razor blade. After covering all the frames, apply a spray coating of water. This will remove any wrinkles in the tissue. The body is double covered, with the grain of the paper running at right angles to each other for great strength and puncture resistance.

Dope the body and wing with three coats of thin nitrate dope but apply only one coat to the stabilizer and rudder.

Final assembly involves cementing the motor cowl in place on three sides, front, top and bottom. Allow the necessary clearance In the rear. This opening represents an outlet for the cooling air which is necessary on the full size ship. Cement strips of 1/16 black paper to the fuselage and tails to represent control surfaces, doors, windows and partitions. All the letters are made from black paper and are cemented to the wing and body with nitrate dope. The wings are held on to the fuselage with 1/8 rubber loops.

Power for the plane is supplied by 24 strands of 3/16 flat rubber well lubricated. Don't allow the lubricant to splash on the sides of the body or it will produce a messy looking fuselage.

Check glide the Moth to correct stalling or diving tendencies. Balance the model approximately 1/3 to 1/2 back of the leading edge and go over all surfaces for warps.

The left wing should be warped up slightly to prevent diving in under power since the plane flies against torque. Then test fly with about 100 turns in the motor. Look out for any spiral diving tendencies and correct with thrust adjustmnents. It is very much worth your while spending a great deal of time adjusting the Moth. The more adjustment put into this model, the better it will perform." 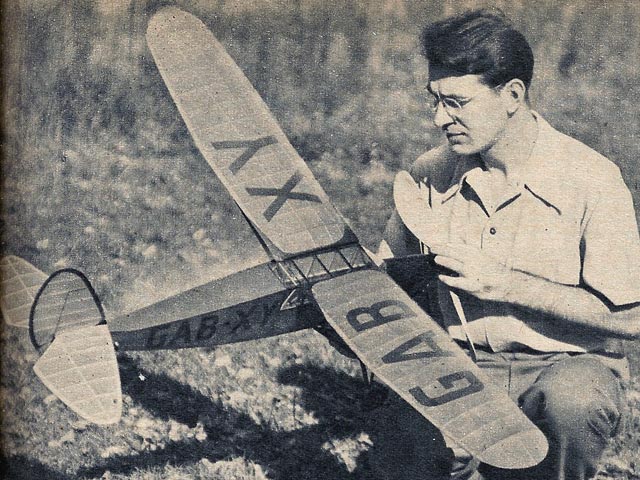