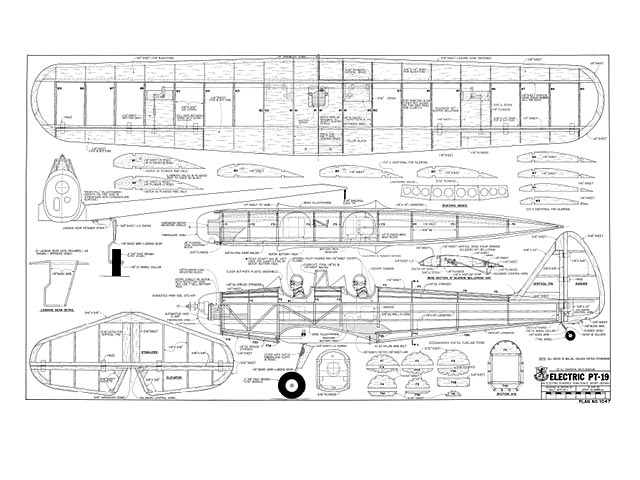 Quote: "Gentle, low wing model is an ideal electric or glow powered model for the experienced builder. The flying is very docile and forgiving.
By Walter Mitchell Jr.

The Fairchild Pilot Trainer 19 was indeed a 'fair child' - a docile and forgiving airplane with a sunny disposition that endeared it to fledgling Army Air Corps pilots. Built mainly of wood, the airplane nevertheless endured student prangs, and many are still airworthy - a tribute to the Fairchild Corporation's sturdy building techniques. As one reference put it: PT-19's are still flying because the termites are holding hands along the wing spars.

The model is gentle also, enough so that it has served as a re-trainer for me after my long hiatus from the hobby. And it flies well enough to draw kudos from knowledgeable RAF (that's Roswell Air Force) pilots such as Dayton Hedges, Hicks Milner, Dan Rowe, and Lon Turner, all of whom have taken a turn on the box.

An aside about the RAF - our club used to fly out of Roswell, Georgia, a bedroom community near Atlanta. But, same old story, there got to be so many bedrooms in Roswell that we got run off to Duluth, Georgia. DAF simply won't get it, however, so we've stuck with RAF. It's a good club - very safety conscious - with many interesting models, especially 'Slick' Larsen's fleet of magnificent Quarter Scalers. At age 70, Slick has more fun flying toy airships than should be legally permitted. Our field is graciously on loan to us from Peachtree Corners, Inc, a corporation whose head knocker is my old friend Paul Duke, who really used to knock some heads when he was an All-American football player at Georgia Tech.

Construction of the Electric PT-19 is fairly straightforward, but should be attempted only by the experienced modeler who can make adjustments if something doesn't quite fit. Building from scratch is one thing; telling somebody else how you did it is quite another.

The important thing in building for electric is weight control. Select the lightest balsa you can find and don't overbuild. If you see something in the plans that could be changed or eliminated to reduce weight, do it. The prototype came in at 3-1/2 pounds - about half airplane and half R/C equipment, motor, and batteries. It is covered with medium silkspan, again to save weight, but one of the heat shrink coverings would be okay.

To apply silkspan, first dope the framed-up airplane thoroughly. Then lay the silkspan in place, spray it with water, and dope the perimeter to stick it down. Don't worry about any wrinkles except sharp ones. In a couple of hours the silkspan will have shrunk drum-tight, but without crushing any framing. Hit it with two coats of dope, sand with #400 paper and you're ready for color, which properly should be a blue fuselage with yellow wings and tail, and the Army Air Corps markings. To avoid all this trouble, I am pretending that the prototype was rebuilt for sport aviation a cop-out, for which I apologize.

One neat thing about electric is you don't have to worry about fuelproofing (lacquer from the hardware store works just as well as dope, and it's a heck of a lot cheaper.) The only real drawback about electric that I've found is flying time, which at full bore is only about six minutes. But at least you'll never be accused of hogging a frequency!

Also, it's complicated. To me, all electrical things should have only two wires - one red bringing the juice in and one black taking it out. This is what I believe, and I'm sticking to it. Fortunately, my oldest son Mitch, who conned me into returning to the hobby to keep me busy during my autumn years, has a more liberal view. He selected the equipment for me, wired it all up and patiently taught me how to operate the off-on switch. If you are electrically ignorant, do not attempt this project without someone like Mitch to coach you..." 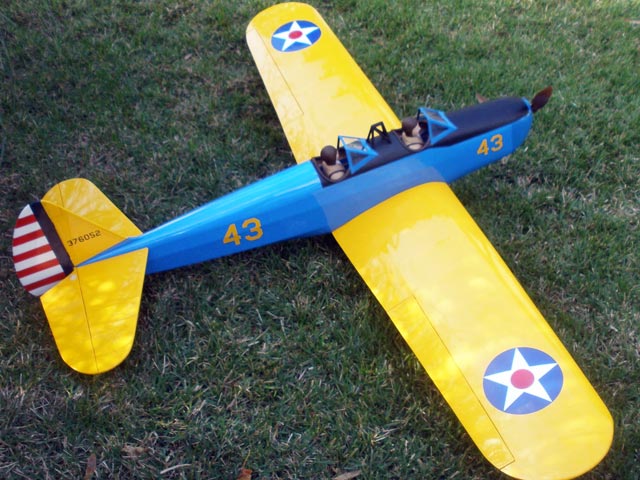