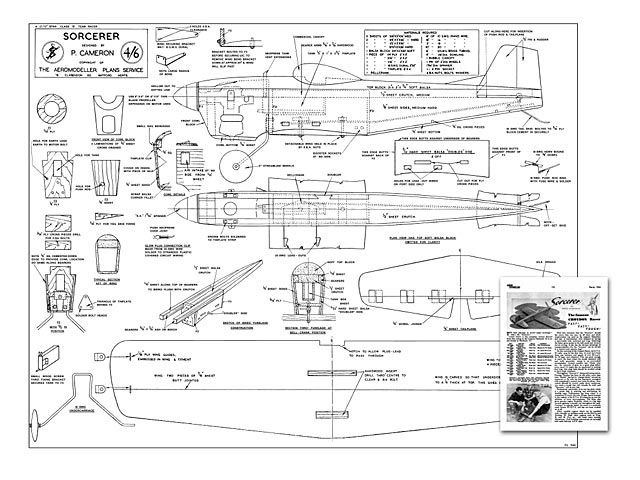 TEN final placings in twelve major meetings - that's the 'Sorcerer.' Listed below is the complete contest Record from first outing in the Gosport Nationals '52 to its sad demise at Sherbum '53: (see table).

With the intention that the Sorcerer should last more than one race, an all sheet and block construction was used on the original. Reliability and ease of maintenance were obtained by having a removeable tank, undercart and wing. Detaching the latter gives access to the bell-crank and booster circuit wiring. It also has the obvious advantage of transportability - for the Sorcerer can be carried in a motor-cycle pannier bag!

On the morning of the Gosport Races, the ETA 29 really sang for the first time, (it must have been those sea breezes), and speeds of over 80 mph for 30 laps were obtained. This was good enough to reach the final, where the model remained well and truly grounded, owing to an overworked accumulator. (Lesson number one. Check your acc for intensity of glow on a spare plug before every race!) It might also be mentioned in passing that long thin plug leads should be avoided owing to their high resistance.

Throughout Sorcerer's chequered racing career, Norman Butcher has been its sole pilot; more than once Butch has had to 'change hands' around an opponent or fly with his feet hopelessly entangled with somebody's control wire (note for pilots - wire cutters should be worn!) under these conditions, you want a model that will virtually fly itself, and Sorcerer will do just that.

Particularly noteworthy is its two lap glide which is a great help in selecting and anticipating its landing spot. Performance has been raised to a consistent 95 mph for over 30 laps. Speed increase is due mainly to the ETA 29 loosening up and the addition of more nitro-methane. The latter also gives greater engine flexibility, which is a big help towards getting a smooth run throughout the tank. Contrary to popular belief, the motor is a perfectly stock Series III ETA and has not been worked on at all.

Other suitable engines which can be installed with virtually no airframe mods are the McCoy and Dooling 29. Shaft valve engines such as Frog, K and B, Fox, etc., will entail some cowling alterations. Full building instructions are included with each full-size APS plan." 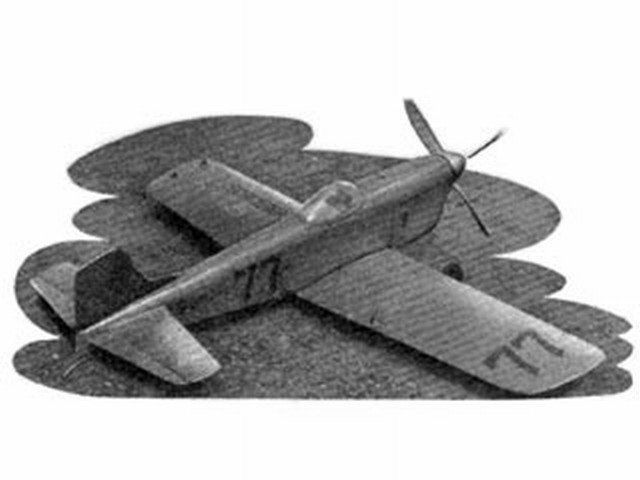