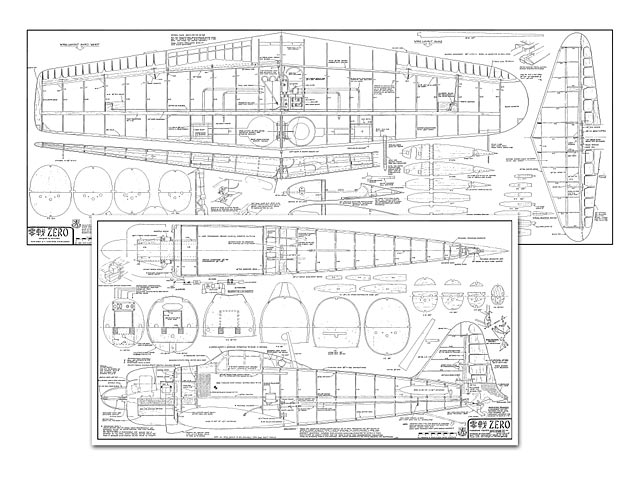 Quote: "Mitsubishi A6M5c Zero. A true scale model that is easy to build and a joy to fly.

A good friend of mine, who had just witnessed the maiden flight of this model, made a simple but profound summary 'The Zero,' he said 'is the most honest scale model of all.'

While I doubt that I could have caught so much truth in so few words, it was not a surprise to me that the flight had gone so well; indeed, had I felt less than totally certain of the model I wouldn't have been christening it right in front of everybody at the 1/8 Air Force's annual spring Fly-In. Zeros instill confidence. In any size and seemingly at any weight, they fly beautifully. One fellow here in South Florida, who somehow contrived to build a Top Flite (60 in span) Zero to the staggering weight of 12-1/2 lbs, reported that its handling, nevertheless, was excellent. It is easy to imagine that given a more typical wing loading, a Zero becomes a true champion of docile virtue.

Why? What magical formula sets apart this airplane from others? At first glance it appears to have no more than the typical run-of-the-mill layout of its contemporary WWII fighters. But evidently this is a design that bears closer scrutiny, because if we can analyze what makes it tick, it may guide us toward finding others of like friendliness.

As we shall see, it turns out that just about all of the assets that the Zero possesses to make it a fine R/C model are the same inherent requirements that were demanded by the specification laid before the designers of the full sized ship. Before all else, it had to be light. This was to make sure it would be totally maneuverable and aerebatic; primary requisites for a dog-fighter.

These needs dictated a simple structure (and thus a straightforward outline), a large wing area coupled with a thick airfoil, and large control surfaces. In this last respect, the Zero's ailerons are perfect for a model: narrow chord (avoiding tip-stalls from high deflection angles at the tip) but long in span, giving them a lot of area. The ideal layout for power with gentleness.

As modelers we are lucky in that the two serious deficiencies of the Zero resulting from this emphasis on light weight hurt us not at all. Its pilot protection was poor (we lose very few pilots) and its fuel tanks, being non-self-sealing, were vulnerable. We don't get too many peppered Sullivan 16 ouncers, either.

Next, the ship had to have excellent ground handling, or should we say deck handling. Carrier operations quickly punish poor gear design; no Me-109-type landing gear for Mr Horikoshi! Instead, with a complete disdain for complicated geometry, he opted for a straight sideways inward folding landing gear with simple doors. As modelers, we can approach this wide-tracked easily duplicated gear with a good deal more cheer than those of say, the Wildcat, Vindicator or Firefly, all Zero contemporaries... " 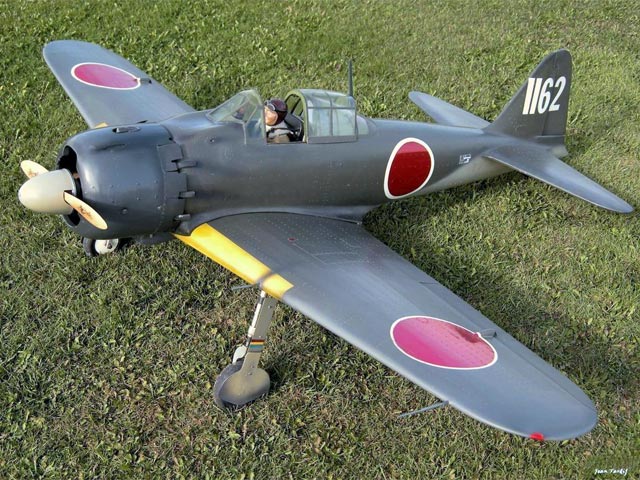 Hello Steve, I built this A6M Zero from Dave Platt plan and semi kit [more pics 003-010]. This war plane is the easiest war plane I fly for such a long time. Easy handle, track straight with its wide landing gear, smooth, no bad habit and is a very nice thru scale line plane to build also.
JeanSkyDive - 10/10/2017
Thanks OuterZone
Miguel Angel - 25/07/2021
Add a comment