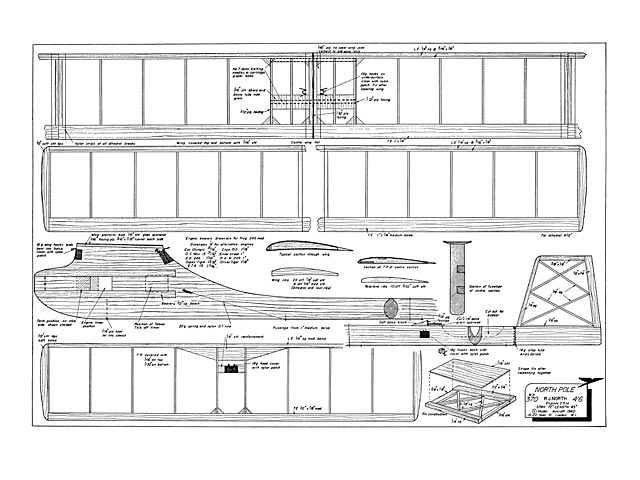 Quote: "WORKING on the well established principle of: it's simple its strong and it does the job - North Pole is a practical, if by no means a pretty model, although its lines have a certain angular elegance, which is far from out of place in a model designed for active contest flying. Constructionally it is as strong as possible and more than capable of withstanding many contest seasons of hard flying.

Wing Construction. Build as four separate panels. Pin down leading and trailing edges, add 1/8 in ribs and 1/4 in root and dihedral ribs, not forgetting to check the angle of the latter to accurately allow for the dihedral. The trailing edge will have to be blocked up 1/16 in at its front and the ribs 1/8 in at their rear, to allow for the lower sheeting which is butted on to the trailing edge later.

The holes for the joining tubes should be drilled in the centre ribs 'en bloc,' not forgetting to add the ply facing to the centre and internal ones. After plugging the inside ends of the tubes to prevent the alloy dowels from sliding into the wing, fit the -tubes on to the dowels, thread the lot into the ribs and cement well. Using the dowels at this stage will ensure that everything lines up later. Do not forget the 1/16 in sheet load spreaders.

Now carve and sand the leading edge to shape; then, still on the board, add the 1/16 in medium top skinning, having previously butt jointed two or more sheets, if necessary, to obtain a sheet of sufficient width. Contact cement or PVA should be used here.

When all is dry, remove from the board and acid gussets and lower sheeting, pinning securely to the under camber. The construction of the tailplane is basically identical with the wing, so no separate notes are necessary.

Fuselage. The fuselage construction is self-explanatory and bearer spacings are given for most popular 2.5's. Tank and timer arrangements have not been detailed, as these vary with the system used, but the original model had a Keilkraft cut-out mounted with its arm on the port side and lightly tensioned to the open position with a rubber hand. A slightly modified Autoknips timer was used to actuate this and was, in fact, arranged to be easily removable for attention. A Tatone DJ timer saves a lot of bother with fuses and operates the pop-up tail via a flax or nylon with a light coil spring for tension..." 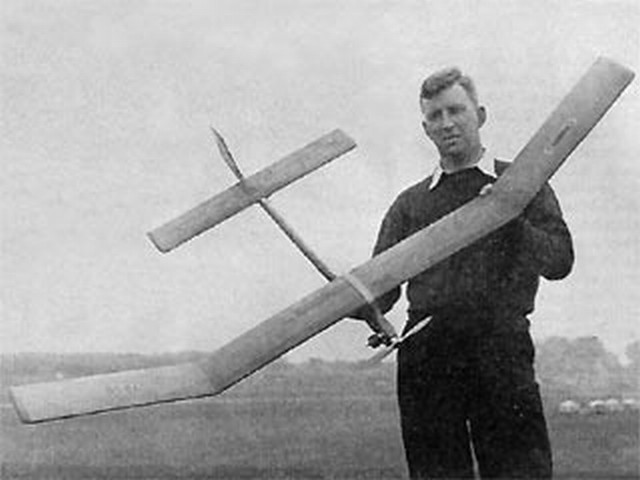