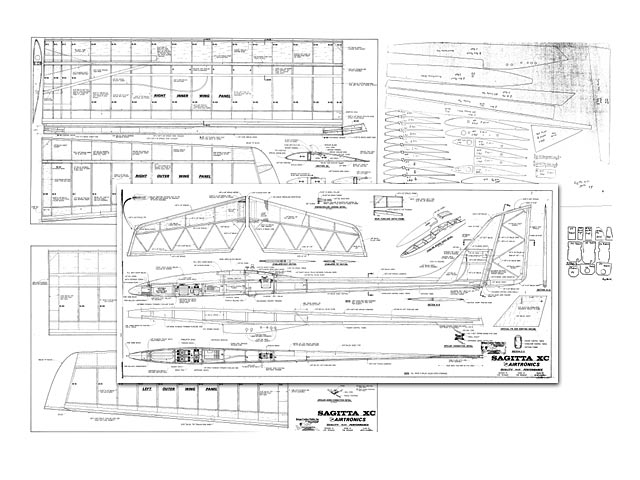 Quote: "Steve, Couldn't see this on your site so I thought I'd better send you a copy. Cheers,"

Update 09/07/2021: Added kit instructions, thanks to Pit. Note these pages are slightly cropped at the bottom.

Quote: "Introduction: Since the mid-1970's. there has been a significant increase of activity and interest in R/C sailplane cross country flying. One of the most important reasons for this increase in interest has been the Great Race held by the SOAR Club in Plainfield, Illinois. This cross country race has been held annually since 1976, and the objective is a simple one: fly around a 76-kilometer course in the shortest time possible from a single launch, or, failing that, log the longest single flight. Skip Miller, pilot for the FAST team, was the first to ever complete the course in the 1982 Great Race. The thousand dollar first prize check was collected by the MOSS Club of Ohio for completing the course in the fastest time.

The challenge that cross country flying presents to the pilot can be found in no other phase of soaring. Instead of being restricted to airspace limited by field boundries, the flyer can literally fly as far as he can see. The decisions to be made are numerous: how long to work one particular thermal, how high to climb in a thermal before leaving it, how fast to fly between thermals, how far to follow lift off the course and dozens of others. A large part of the allure of cross country flying is the 'man against nature' aspect of it. The length of the flight is entirely dependent on how well the pilot uses his skill and knowledge to face the conditions nature throws at him.

Cross country tasks also offer a demanding challenge to the sailplane designer. A cross country sailplane needs to be very efficient with a high L/D, visible at high altitude and/or great distances, stable enough to fly hands off if the pilot becomes temporarily disoriented or loses visual contact, and strong enough to survive high speed runs between thermals and encounters with wind shears during those runs. These requirements have led to a breed of sailplane which is very large, has a broad speed envelope, and utilizes a conventional polyhedral layout with rudder and elevator as the primary controls.

The Sagitta XC (XC is the abbreviation full-scale pilots use for cross country) was conceived expressly for cross country flying as well as competing in the SOAR Great Race and similar events. The airplane has been quite successful, gaining one second place and one third place in the Great Race and being the first plane ever to complete the course during the competition itself. The size was determined by laying out the wing and stab to the maximum surface area allowed by the FAI. A large wing chord and 14-1/2 foot wing span give the XC an aspect ratio of 14.4 to 1 and allow it to operate at a higher Reynolds number than most models, both of which are factors which contribute greatly to the model's efficiency. The Eppler 205 airfoil and careful attention to drag reduction make for a very clean airplane with excellent slow speed and climbing characteristics as well as the ability to cover astonishing amounts of sky in short order. The polyhedral wing gives the XC hands off stability in straight flight and gentle turning characteristics, while the full flying tail surfaces give positive response to control inputs at all speeds.

The structure of the Sag itta XC was carefully engineered to provide the strength necessary for an airplane of this size to survive the rigors of cross country flying. The wing features D-tube construction with full span box spars in the center spars. The fuselage consists of a birch ply forward section with an airply and balsa tailcone. The resulting airframe is extremely stout and able to withstand considerable stresses without damage, but still offers the advantage of using conventional materials and construction techniques.

At this point the task of writing the construction manual for the XC will be put in the capable hands of Al Doig. I would like to thank Al for his writing and photographic talents. I would also like to extend a special thanks to Skip Miller, Gordon Pearson, and Roger Taylor, each of whom built prototype Sagitta XCs, and gave me invaluable help in arriving at the final design presented here. Lee Renaud.

Pre-Construction Notes: The Sagitta XC is not a difficult model to build, it is simply large. However, due to the large number of parts in the airframe, we recommend that you read through this manual at least once and familiarize yourself with the plans before starting assembly of the kit. Understanding the entire construction sequence will help you avoid any problems early in the assembly of the model.

No special techniques or building fixtures are required in the construction of your Sagitta XC, however a good building board is a must. To avoid building in warps. the board must be perfectly straight and flat. It should also be faced with a material which you can push pins into easily.

A few simple tools will be needed. These include a model knife and/or a supply of single edge razor blades, a razor saw, pliers, a small hammer and a hand drill and drills. You will also need hardwood sanding blocks and assorted grades of sandpaper, a small block or razor plane, a supply of straight or tee-pins and masking tape.

The types of adhesives used are a matter of personal choice, but we don't recommend normal model airplane cement. For general construction, we suggest the use of aliphatic resin glue such as Wilhold or Titebond. Slow drying epoxy such as Hobbypoxy II or Sig will be required and 5-minute epoxy will be useful. We built the prototypes with Jet and feel that the time and weight saved is worth the extra cost. There are many other alpha cyanoacrylate adhesives available now, and all seem to work well.

Be sure to follow the warnings on the bottle and check that all joints fit tightly. Be sure to cover the plans with Handi-Wrap or similar material before starting construction so that the structure does not become glued to the plans..." 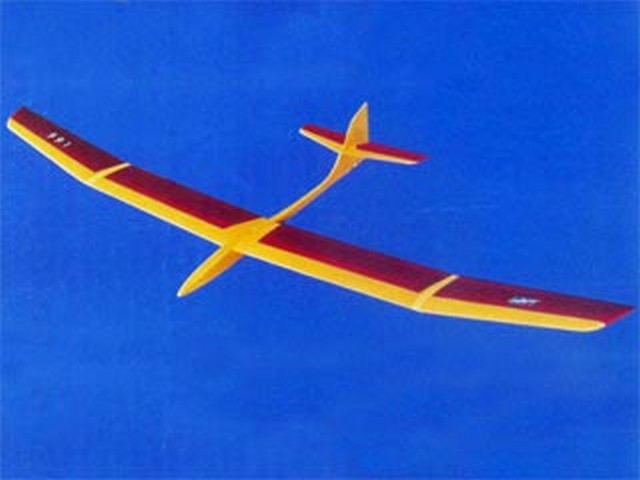 Cover this in black topsides and red under and you have Count Dracula's hang glider!
Nice Airtronics plan list here in Oz, each one prettier than the other :-)
Miguel - 09/07/2021
Add a comment