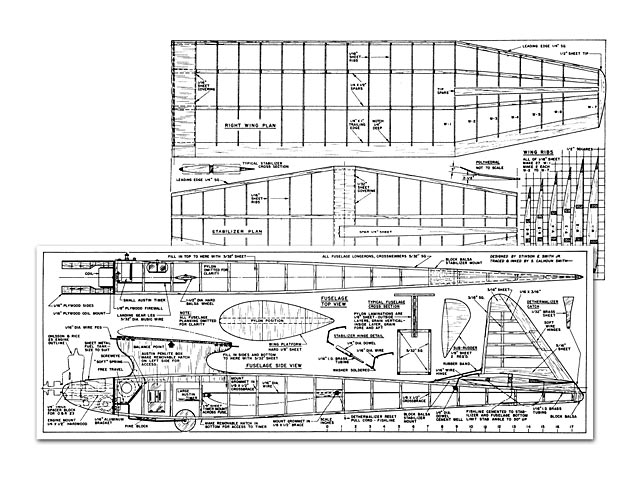 Quote: "Ever see a 5 ft gassie with a '23' powerplant climb like a rocket? Then build this class B free-flight winner.

WHEN the Academy of Model Aeronautics rules for 1948 came out there immediately developed two schools of thought among free-flighters. One group declared that the large, super-gliding floater was the answer to high power load-ings. The other group, stating that a glide was no good without altitude to start it, clung to the fast climbing jobs of 1947. Actually, neither the floaters nor the high climbers are good under all conditions. When there are no thermals present the rocket climbing jobs come down almost as fast as they go up, and the floaters often have a hard time getting high enough to catch a thermal when there are some. Obviously the answer lay in a fast climbing floater which could out-glide the rock-climbers and out-climb the floaters.

A model airplane's wing contributes a major portion of the plane's total drag because of the very low Reynold's number at which models operate. With this fact in mind, I decided to try a large floater type job with a 'streamlined' wing which would allow the ship to climb rapidly. I chose the thin, flat-bottomed Clark Y 09 section which is the secret of Ichabod. Ichabod can climb almost as fast as the small rocket climbers and can glide just as flat, though somewhat faster than the conventional floaters. The original ship, powered by a rotary intake Ohlsson and weighing slightly more than the required 23 ounces, climbs with amazing speed in rather wide circles, and glides in fairly tight circles. Unfortunately, the thin wing which produces the fine climb also produces a fast glide. There is nothing aerodynamically bad about the glide, but damage can result if the ship connects with something solid - and how many models don't have mishaps!

Ichabod has more than the usual amount of spiral stability. It will loop, however, if not allowed to turn in the climb. Try an Ichabod. You'll be pleasantly surprised to see a 5-foot, 440 square inch job climb as though it had twice the power of a 23 in it. If you like, Ichabod may be flown in Class B and C interchangeably. Simply add eight inches to the center of the wing, two inches to the center of the stabilizer, and use a Torpedo 29 and 32 or a Forster 29 and 305 interchangeably.

The basic frame is constructed of 5/32 in sq very hard balsa. After the sides have been made and joined by the uprights, cut the firewall from 1/8 in birch plywood and cement it in place at the nose. Bend the landing gear bracket from .040 aluminum, drill the necessary holes, and bolt it to the firewall. Bend the landing gear strut from a piece of 3/32 in music wire and slip it into the bracket. Solder a washer to the strut on either side of the bracket to hold the strut in place. Use a 1-1/2 in balsa wheel and solder a washer on either side of it.

Fill in the right side of the fuselage with 1/32 sheet and mount the timer and battery box as shown. Wire up the battery box and timer, extending the wires through the firewall to be connected up to the coil and ground later. Now make the pylon of three laminations of hard 1/8 in balsa..."

Article, thanks to Andrew0820. 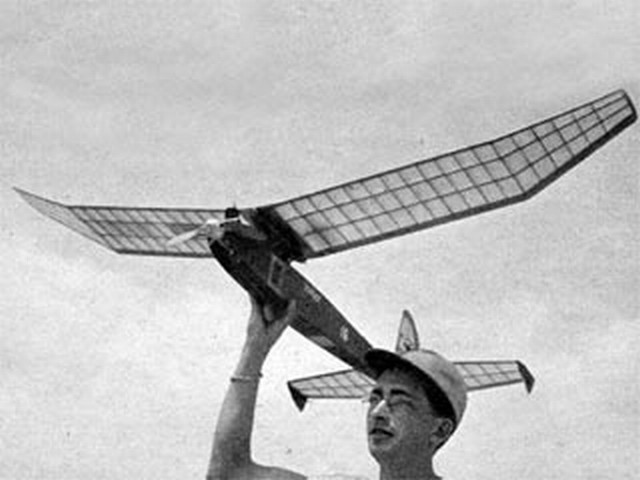