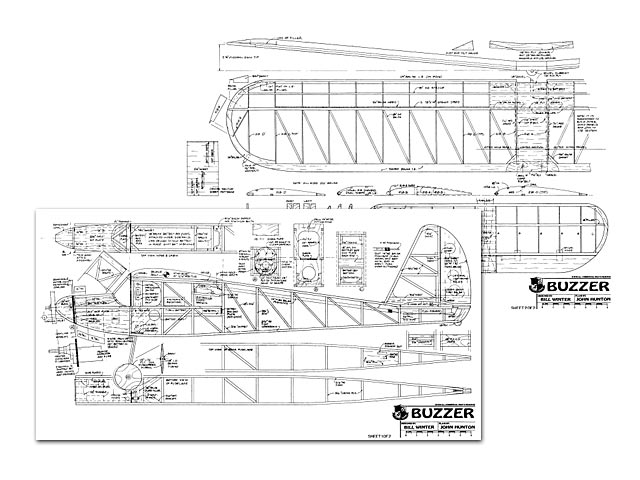 Quote: "During seventy-odd years of designing user-friendly RPV's of the third kind, it became written in stone that unique pleasures require specialized craft to fit a variety of flying environments including, ifyou will, the bedlam at the club site on some Sundays. When you have the opportunity to float beneath the puffy clouds, nursing air currents, sticks untouched, or nudging them while watching your bird come alive, you realize that 'flight" is made sublime by an occasional out-of-body experience. R/C itself may be the common denominator but in its own world the Buzzer is as good as it gets.

Buzzer has a pedigree. I designed a 30 inch Buzzer for CO2 that published on a fold-out center-spread plan in the December 1948 Air Trails. In more recent years Don Srull resealed it to 26 in for plan sales with the mini 6 HiLine motor when he was associated with that company. Its area was 100 sq. in. Dave Reese, now the HiLine man, markets that plan for $3.50. Power is the Micro-4 motor. So now 50 years later, finding these pretty variants such good fliers, I've designed this enlarged version to delight all 'plane watchers' - Bill Winter.

Bill Winter dedicated his life to model aviation through writing, editing, designing, and encouraging contributors. Bill was involved in design from the very earliest modeling days. There is an aesthetic continuity in his creations - you can see a model of his and readily recognize it as 'Winter.' There was a sense of proportion in his designs that captured the very essence of the Golden Age of aviation.

He achieved this perfection through iteration. He would begin the basics of a design with proven wing loading, areas and moments, then overlay it time after time refining the design until it became what he had really visualized. One September afternoon when Bill launched his Buzzer into the clear sky, as we watched it climb out he said - Isn't that just beautiful? - And it truly was.

Bill designed a companion model, the Hummer (January 1999 R/C Modeler). One afternoon when I dropped by Bill's house for our weekly meeting, his son Mark said that Bill had been taken to the hospital earlier that day. I noticed that the latest copy of RCM with the Hummer was in a stack of unread mail. I took the magazine to the hospital to show Bill. As we flipped through the pages of the beautifully presented Hummer article, a big wide grin came across his face and tears formed in his eyes -That is a good one - he said.

The next day he was gone.

Construction. To build a light airframe that is efficient, yet structurally sound, several different sizes of wood of various weights are required for specific applications. It is normally expected of the builder to review the plans carefully and obtain the required wood in the proper amounts before building. There are ninny good suppliers who advertise; some will grade wood for a small charge. Wood sizes are given on the plan and are not covered in the narrative. To assure equal strength, cut all longerons from the same sheet or select and match the stick material carefully.

Study the fuselage construction photos. Note that internal frame C is built over the section detail on the plan. When this frame is glued to the inside of the fuselage sides, it makes a strong former and accurately jigs final assembly. Formers A and B are aircraft (Birch) ply. You will need a jig saw or coping saw to cut out B. Fuselage side sections at the landing gear and wing hold-downs are filled in with sheet which is installed before the sides are lifted from the board.

Pin down one side over the plan. Use carefully matched and selected material for the longerons for equal bending later in the process. Use a straightedge to align straight portions of the longerons. Do not pierce the longerons with pins, straddle the wood. Single pins, however, can be used to install verticals and diagonals. Add all nose and fill sheet parts. Build the second side directly over the first using wax paper between to prevent adhesion of the sides.

When completely cured, lift the frames from the bench and separate where necessary with a balsa knife or razor blade. Block-sand the surface of each side flat. Add doublers to the nose portions (be sure to make opposite sides), noting that there are additional inner doublers. Pin down the right side flat on the board. Glue former C into position against the upright. Glue ply bulkhead B to the side sheeting and against the rear face of the upright. Cut out small balsa right angle triangles and use to align both sections..." 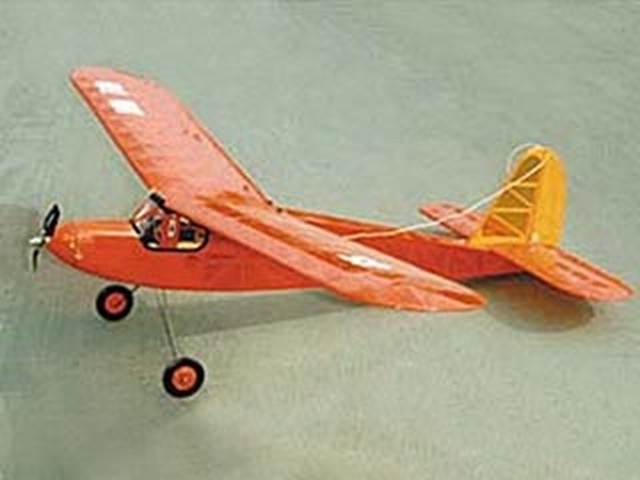