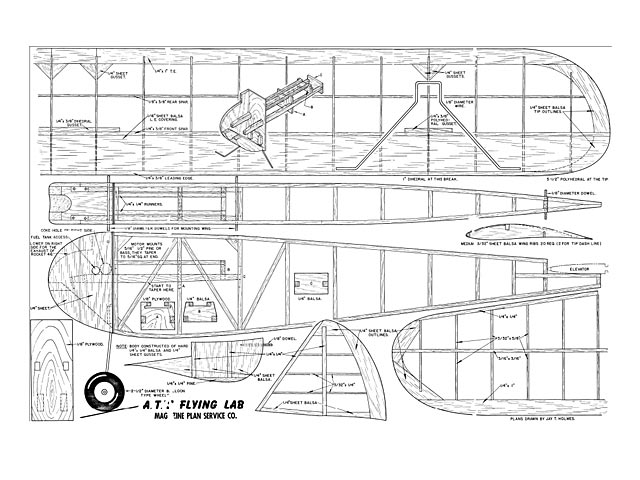 Quote: "WHEN you get right down to it, we model builders, unlike designers of full-scale aircraft, know very few specific facts about design, to back up what we know about theory. There is much to be learned about so many things. There are many popularly accepted but false notions that should be exposed to the light of day. We can't even make up our minds about simple things like aspect ratio, lifting tails, and downthrust - all of which is why this modest-looking gassie is going to prove important.

On the plan presented this month, you will note that 9 degrees downthrust is used. This was the first of a series of experiments that will take place over a period of a year or more. There are twelve wings of various aspect ratios and airfoils awaiting flight tests, and sometime later this year we shall present some interesting comparative findings. Meanwhile, if you want to build a sturdy, simple-to-make, good windy weather flying model, make a ship from these plans.

The whole business started last summer when we finished a series of strobatac tests of new motors. That was when we found out that the Rocket motor, unknown to most builders, despite its displacement of only .46 had roughly power equal to existing .60's. Here was an opportunity to build an airplane that under the rules would have an enormous advantage over other class C jobs. Imagine a 37-ounce job with power equal to that of the usual 48-ounce ship!

Trying to handle that power led us to downthrust and, after some eye-opening observations, it was decided that it would be a good idea to run down, by flight tests, more of the answers to some of these years-old debates. For, we found that downthrust had many unsuspected good pints and, properly used, converted a so-so box into a high-performance contest model, merely because power was so controlled that the last bit of umph could be taken from a highly overpowered job.

To begin with, everything possible was done through design to make a model that was stable in every way and under all conditions, even in wide-open vertical banks. This was accomplished by such tricks as using a high center of gravity and a deep-bellied fuselage to achieve the proper relation between profile area and the location of the CG, and a wing set close to the thrust line to avoid excessive looping or stalling under power. We banked on downthrust to do the rest.

As the two diagrams on page 48 show, downthrust had a highly important effect on keeping the model climbing steeply into the wind, and, just as important, preventing power turns from tightening up into disastrous spirals. Study the arrows and you will see why this is true. The arrows relating to downthrust represent only one component of the thrust force, for we all know that most of the thrust goes into forward flight. Downthrust will be the subject of a future article.

Another interesting item was that we figured that so much power was available that we would prefer a thicker wing than the customary NACA 6409 so we used the RAF 32. Forty-nine flights had been made - with one crack-up that did slight damage - when we decided to enter the test ship in the Long Island Championships, where it placed fourth in its class after two out-of-sight flights. (It was lost for a month after the second flight.)

The more discerning reader will want to know why we didn't use a lifting tail instead of dwnthrust. The answer to that was that we were interested in downthrust to begin with, and secondly, that it is not necessarily true that a lifting tail increases the efficiency of the airplane. Though lifting tails will probably he a subject of future experiment in this series, we'll give you one thought for the interim. Consider that two things make a lifting tail necessary on many models..."

Article, thanks to RalphB. 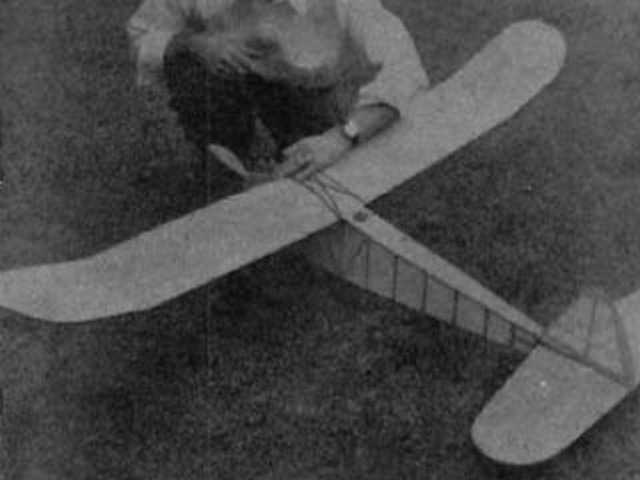