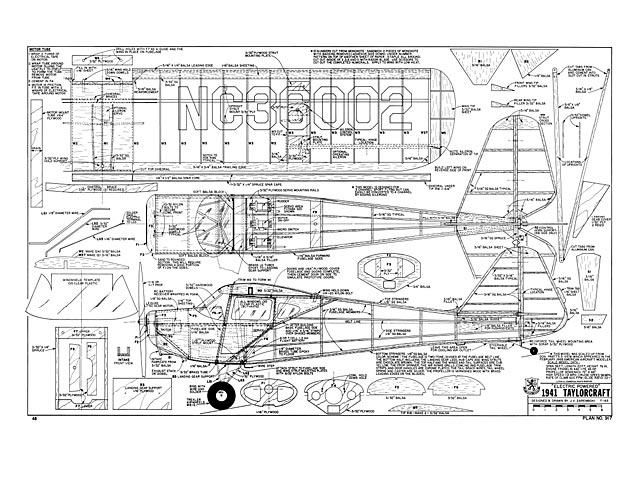 Didn't every modeler build a Comet Taylorcraft (oz81) as a youngster? I never did. It was just too big at 54 in and too expensive with a cost of a whopping $3.00 in the early 60s. I have a younger cousin who finally put together the Comet kit and it was just beautiful. It made a lasting impression on me.

In fact, when searching for scale model candidates for the Leisure LT 50 gear drive system, I just couldn't make up my mind until I saw the modern version of the Comet kit on the local hobby shop's free flight shelf. The modern Comet kit is just the same as the old time version - just a new box. Right then I knew I wanted to construct a T-Craft.

I found a super three-view by Don Pratt in the February 1968 American Aircraft Modeler (now defunct). The version Don documented was the 1941 BF 12-65. This was blown up to 63 in span to give you the model presented in this article.

The history of the Taylorcraft goes back to 1929 when CG Taylor and his brother founded the firm. Prior to WW II, the Taylor Brothers Aircraft Corporation designed and built the Taylorcraft models B, C, and D. The models C and D were produced under a licensing arrangement by Taylorcraft Aeroplanes Ltd of England, which eventually became Auster Aircraft Ltd.

The L-2 Grasshopper is a military version of the model D. Over 2000 of these were built by the Taylor brothers for the Army Air Corps and sported the olive drab paint scheme used on WW II observation planes. The company went bankrupt in 1947, was re-formed under the name of Taylorcraft Incorporated, and produced a variety of models until it ceased operation in 1958. The manufacturing rights for T-Craft production were obtained by the Univair Corporation of Colorado, but no new ships were built.

In 1968 Charles and Dorothy Ferris became interested in manufacturing the old classic. Charles had been a Taylorcraft distributor in the Chicago area since 1937, and arranged to purchase the Taylorcraft design right from Univair in 1968. The new Taylorcraft Aviation Corporation spent its first five years servicing the many older T-Crafts still flying, and redesigning the new model F-19 Sportsman 100.

The F-19 Taylorcraft was first built in 1973 and is very similar to the old models B, C, and D, but used a 100 hp Continental 0-200-A flat four-piston engine. The cruise speed is 115 mph with a range of 400 miles. The Sportsman production run was completed in 1980, with 150 of these ships constructed. At that time, the F-21 Taylorcraft was introduced sporting a Lycoming 0-235 L2C engine, which is rated at 112 hp. Twenty-one F-21s were built, followed by five F-21A's, which is the present model produced by Taylorcraft Aviation. The difference between the F-21 and F-21A is that all of the fuel tanks have been removed from the fuselage to the wings in the newer F-21A.

Charles Ferris passed away in 1976. Since that time Dorothy has operated the small aircraft firm. The Taylorcraft factory in Alliance, Ohio, has 13 full time and part time employees, and will continue to build this classic aircraft for years to come.

I called Scale Model Research, 418 E. Oceanfront, Newport Beach, California 92661, to find out if they had any documentation in the form of photographs and data sheets on the model B. They didn't have the model B, but had a complete Foto Paak, #506/3B, for the Taylorcraft Model F-21. The Foto Paak contains 33 photos showing every possible angle of N 2006 T which is red with white trim. This brand new ship sports wheel pants and a nice looking spinner. With a minor modification of the window and cowl areas, you can model the F-21 or F-21A from the plans presently here in RCM. The cost of the Foto Paak is $16.50 plus $1.00 for postage. If you're into scale, it's a must.

The Taylorcraft model was designed to use the LT 50 gear drive system (competition wind) with a 3:1 gear ratio and seven cells of 1.2AH capacity. The pattern wind LT 50 with a 2-1/2:1 gear drive also works very well on seven cells, but with a little less duration. Construction is similar to the old Comet kit: Balsa sticks, longerons, stringers, etc. The result is a strong, lightweight model - so let's get on to the building.

Construction. Fuselage: Place the plan on your building board of Celotex or ceiling tile and cover it with waxpaper or Saran Wrap. Pin the top and bottom 3/16 in square balsa fuselage longerons in place and carefully cut the uprights and glue them in position using a thick cyanoacrylate. I used Super Jet by Carl Goldberg for virtually all of the construction with the exception of epoxy on the landing gear support and dihedral braces. (The beauty of cyanoacrylate is that when one fuselage side is finally complete after cutting and gluing the last piece in place, you merely have to wait a half a minute to remove the completed structure from the plan.)

After building two fuselage sides, add 1/16 x 3/16 balsa strips at the forward section and cover the front sides with 1/16 sheet. Be sure to cut out the window openings at this time..." 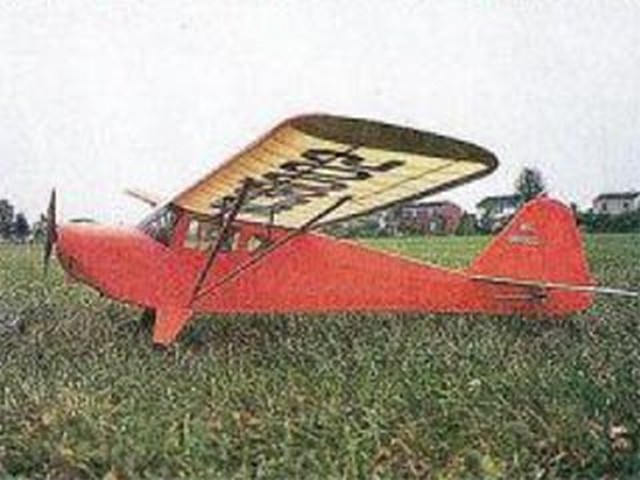