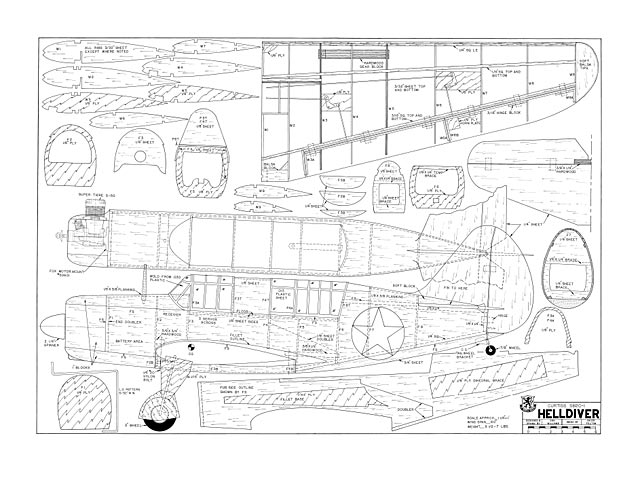 Quote: "I have been modeling for thirty-one years and I cannot recall ever seeing the Helldiver modeled before - either in C/L or R/C - although I could be wrong in the C/L area as I haven't kept up with this phase of our sport/hobby for several years.

As for R/C, I cannot see why it hasn't been done since it has a lot of potential. Although it is a taildragger it has a wide track landing gear and this makes for relatively easy ground handling. It has ample wing area and a thick airfoil section which adds up to excellent flying characteristics as well as very slow stall speeds. It has a huge tail section which doesn't hurt anything at all. The upper portion of the fuselage is about half canopy and is very easy to duplicate as most of it is wrap-over type. An added plus are the nice big fillets which streamline the aircraft and make it very clean looking as well as reducing drag. The fuselage is large enough to accommodate any equipment you wish to use. The wing span is 60in which is roughly 1-1/4 to the foot and designed to utilize a .56 to .60 engine.

The XSB2C-1 Helldiver was conceived in 1938, test flown the first time in 1940, and delivered to the Navy for carrier operation in 1942. It was used in combat for the first time in 1943 in raids against the Japanese held Rabaul. It was also used at Kwajalein, Eniwetok, the Marshalls, and the Marianas. In addition, it was tested by the Army and was known as the A-25A Shrike. Marine Squadrons also received Helldivers for use as land based dive bombers. For armament the Helldiver carried two .30 caliber machine guns in the rear cockpit and four .50 caliber machine guns in the wings. It could carry two 1000 lb. bombs internally and two 500 lb. bombs externally in the wing racks, and travel at a speed over 300 mph. It was not a small aircraft. It had a wing span of roughly 49ft and a length of approximately 36ft. There are a few added inches to these figures but I just rounded them off into approximate feet for this Stand-Off Scale model.

Construction: I usually start with the wing first as I really hate to build them (sound familiar?). It's a job that has to be done so get it out of the way. Besides you will need the wing as soon as the fuselage is constructed. Start the construction by cutting out all the parts. Build the wing upside down so as to keep the top flat. Pin the top main spar to the plan and glue all the ribs in place..."

Article pages, text and pics, thanks to SRQFlyer. 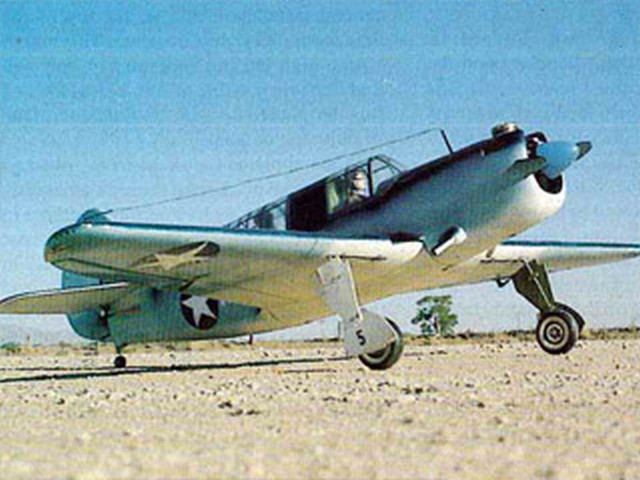