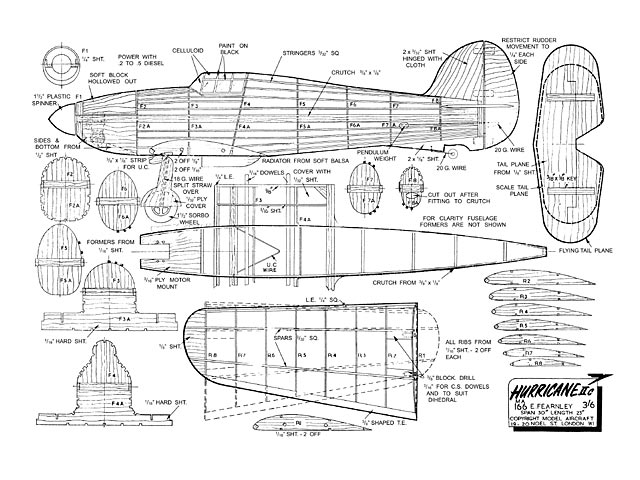 Who could forsee way back in 1934, when the 'Hurri' was laid on the drawing board, that the fate of the nation would to a tremendous extent depend on the skill of the draughtsmen and the people who made this fighter? For contrary to popular belief, and without belittling the war service of the Spitfire, it was the 'Hurri' that beat the worst of the German onslaught in the early 1940s. Squadrons equipped with this aircraft did in fact shoot down more aircraft in the Battle of Britain than any other type.

In continuous operation throughout the whole of the war, it served on seventeen battle fronts. Apart from the effort in Britain, it was outstanding in Malta, where it helped to shoot down almost 800 aircraft. It has operated from carriers, sandy deserts, small airstrips all over the world, for it is one of the toughest aircraft ever built.

The standard equipment of the Mk 2 was twelve Browning .303s or four 20 mm Hispano cannon, with provision for two 500 lb bombs in addition.

The building instructions on this model have been kept deliberately brief as the writer feels that while the model is neither difficult to build nor fly, previous experience is esential.

This is the first of a series of World War II models the writer is building to a scale of 3/4 in to 1 ft, designed to fly in the small back field with one of the .5 engines. Don't try a bigger motor, but the smaller ones are worth modification to the weight if you own one.

Fuselage. This is a 3/8 x 1/8 in crutch built on the top view, with sheet formers added top and bottom. Note that the stringers are added on to some of the formers, and notched to others for rapid building. The nose consists of a plywood motor mount built in the crutch, with soft balsa blocks added and faired to the shape indicated. The motor is upright for easy starting, but can be inverted by choice

Wings. These are as simple as possible, for in a low wing they will probably break first in a serious crack up, and can, therefore, be easily replaced. The only real worry here is accuracy both in avoiding warps, and in the incidence set on each panel as it is dowelled to the fuselage. This must be exact, as the model travels fast, and it must be true. Two and a quarter inches under each wing tip will give a suitable flying dihedral.

Tail. Sheet wood is used for the tail. Choose the best grade of wood you have for this, and be sure it is set true to the thrust-line, and free of warps, or you will get some thrills that will strain your heart when you fly!

Flying. The prototype model flies in fast circles when trimmed properly, and will do so for a large tank of fuel in calm weather without going far. To do this all surfaces must be as the plan, and the nose weighted with plasticine until it balances at one-third of the it chord at the tips with just a little nose-down trim. If the pendulum rudder has too much movement you will think the pilot has spliced the mainspar, or whatever they do in the RAF.

A good deal of the stability (yes it has plenty!) depends on fairly heavy wheels. Rubber ones are effective and add realism to the model."

Update 06/02/2015: Replaced this plan with a clearer copy (patterned background removed) thanks to TonyP. 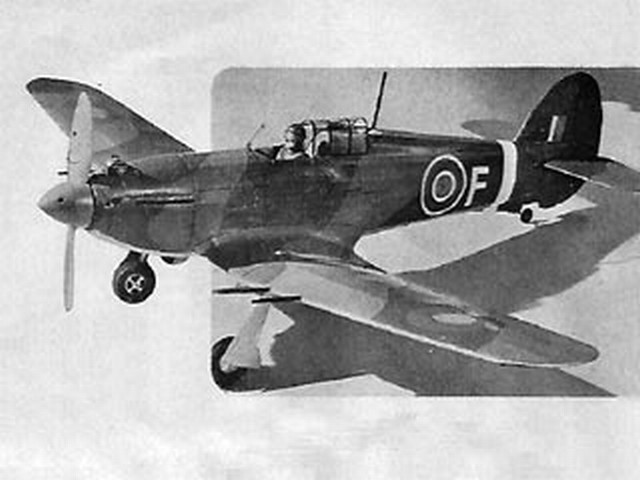