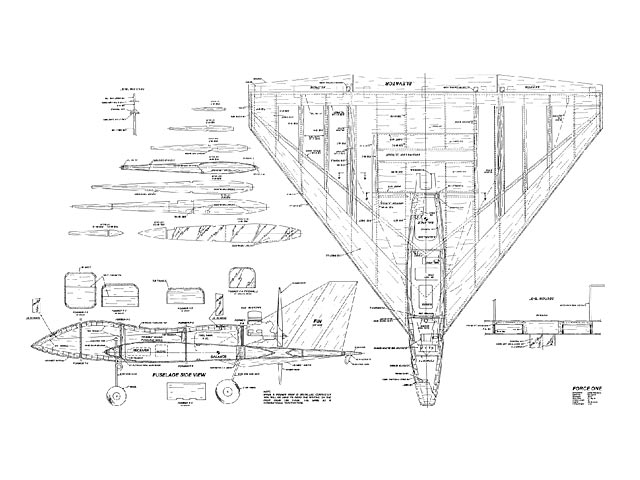 Quote: "After many prototypes, this mid-engined delta-wing is the designer's latest effort. It has superb flying characteristics, good looks, and best of all is easy to build.

All my modeling life, delta-winged airplanes have fascinated me. One of my first single channel models was a delta. About ten years ago I designed a delta-wing model, from which a whole series of deltas was built. Each one had something improved. Most had the engine up front; some at the back.

The model I am introducing to you now is the first mid-engined effort. It has the best flying characteristics yet. It is easy to build, and the best looking, too.

This model is very fast at full throttle, but can fly so slowly that it almost hovers without stalling. Its small size makes it ideal for easy transportation. The model can be built and flown by any beginner with enough experience to be able to take-off and land a conventional aircraft by himself.

Construction. Study the plan. All parts are numbered and will be referred to by number in the construction article. Cut out all of the parts. Drill all holes where shown. Make sure that the fuselage sides are cut from balsa of the same density. The 1/4 x 1/4 spruce stock must be straight. To speed up construction, I use cyanoacrylate on everything except the firewall, nosegear mounts, and mains.

Sheet both sides with parts (12) and (13), and sand to a smooth finish. Now take these two parts and glue them between the ribs (W2) on the positions marked for the leading and trailing edge of the cutout. Then glue the plywood stiffeners (8) on the inside of the two (W2) ribs. Glue the resulting sub-assembly into the main frame..."

Update 17/10/2014: Replaced this plan with a re-scaled version that has wingspan fixed at 36.5in and then aspect ratio re-adjusted to square, thanks to DavidTerrell.