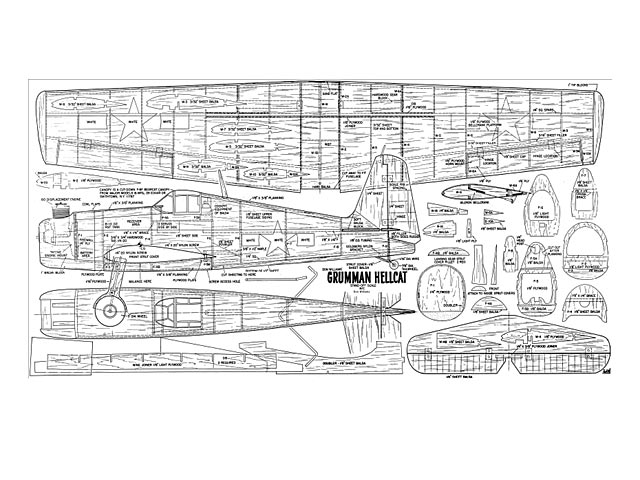 Grumman Hellcat. Stand off scale model for .60 power and RC.

The Mitsubishi Zero-Sen had a decided advantage over our carrier based fighters until late summer of 1943 when the Grumman Hellcat appeared. This situation changed almost overnight when the Hellcat became the mainstay of the Navy in 1944. Out of 6,477 enemy planes claimed 4,947 were credited to this aircraft.

The Hellcat was tailor-made for the Navy as a direct result of conferences with combat-experienced pilots to fight a specific enemy on its own terms. Its closest competitor was the F4U Corsair credited with 2,140 enemy aircraft.

Wingspan of the Hellcat was 42 feet, 10 inches and its length was 33 feet 6 inches. By the standards of the day, the Hellcat was not a small fighter as compared to the Wildcat and Buffalo. It had speed and rate of climb that had been lacking in the F4F and a full range of flight characteristics completely void of any unusual tendencies. It was a pilot's airplane and its potential was made full use of. In short, the Hellcat was a very good fighter aircraft. It did its job against overwhelming odds and came out on top, and that's what counts.

I had wanted to build a model of the Hellcat for a long time. I don't know why I never did, I just didn't. Several months ago a friend of mine expressed his desire to build one and it kindled the flame. Nothing more was said until recently while I was visiting his home and we talked about it at some length which only made the prospects brighter. How large? What type construction? Many questions to answer, but mainly it had to fly well.

I had finished and flown a Stand-Off Scale FW-190 from a set of plans I had purchased and I liked the size, so I decided the Hellcat would be of about the same area. I admired the construction technique of the FW-190 too, as it was simple, fairly fast, and strong. Everything started to form into a picture in my mind, so I got out the drawing paper.

With the construction technique borrowed from the genius model aircraft designer Nick Ziroli, the lines on the paper began to take shape. After three evenings of drawing, material was selected and construction began. It was also decided at this time that a .60 engine would be used. A .51 to .56 would fly the aircraft, but I feel if you model a fighter it should fly like one - fast! 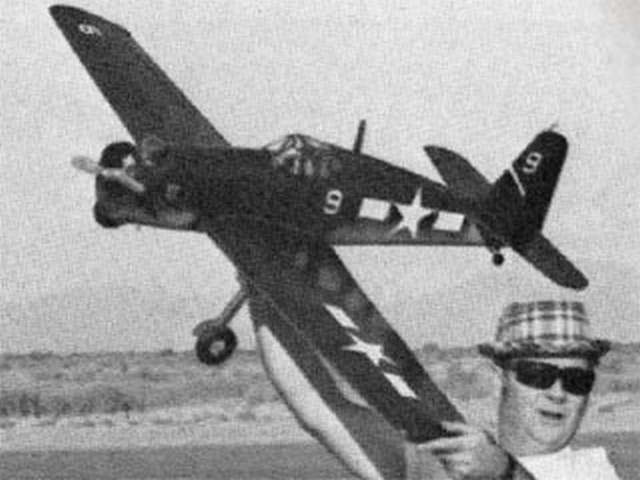