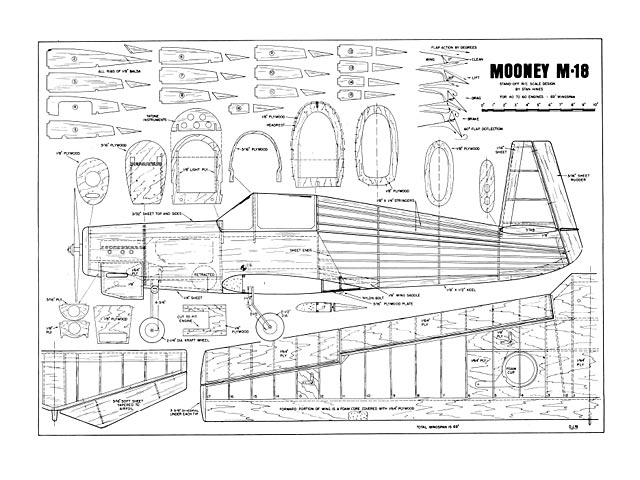 The Mooney M-18 was an enclosed cockpit, single-place, fully cantilevered, low wing monoplane having flaps, fully retractable tri-gear and powered by a 25 hp converted Crosley auto engine. It had a 27 foot wing span, was 18 feet long, empty weight was 450 pounds, and it would cruise at 90 mph. The design was the predecessor of the Mooney 'Mite' which was powered with both 65 and 85 hp Continental or Lycoming engines, constructed of a metal tube frame faired with wood formers and stringers skinned with plywood and fabric. The wings and tail surfaces were also basically wood covered with plywood and fabric. All control surfaces were plywood surfaced. Wherever possible the visible features of the model duplicates the type of construction used in the original plane.

The background of the designer, Albert W. Mooney, was covered in the previous article on the Culver V (oz9484) which he also designed, so I won't repeat it here. For those of you who are interested in the designation M-18, the number is significant in that it was his 18th major design in more than 20 years of aviation engineering. While I have not been able to determine whether there are any M-18's or the later versions of the Mite still flying, there are a great number of four to six place Mooney Model 20's in active use today. All have the characteristic Mooney tail with its nearly vertical leading edge contrasted with the swept back leading edge of his many competitors.

The Model. The plans for the model were drawn to a scale of 2.55 inches to the foot, taken from a three-view found in a November 1948 issue of a model airplane magazine of the time. The model has a wing span of 69 inches, a length of 45-1/2 inches, and a wing area 620 sq inches. It uses an NACA 23015 airfoil, weighs 6-1/2 pounds and is powered by a Fox Falcon .60 engine. The original uses Goldberg tri-gear retracts, an 11 x 7 Top Flite prop, and is covered with red and white MonoKote. The radio installation is a new 1974 World Engine, Mark IV, 6 channel, assembled from a semi-kit.

I chose to model the original experimental plane powered with the automobile engine which accounts for the uneven spacing of the four exhaust stacks on the left side and the very much longer nose than is found on the later Mite models. The longer nose not only helps in the balance of the model, but also allows adequate room for the retract gear which is possible without any special attention other than to follow the instructions that come with the Goldberg retracts.

The forward section of the fuselage is sheeted with 3/32 in balsa to simulate the plywood, while the aft section is MonoKote covered over the wood stringers. The tail surfaces have sheeted leading edges and sheet balsa control surfaces again simulat-ing the plywood and fabric construction of the original.

The wings even more faithfully reproduce the original construction through the use of 1/64 in plywood for the leading edge and for both flaps and ailerons.

Before getting too far into the how-to section, I'd like to have you look at the drawings which show the flaps in four operating positions. You will notice that the flaps are hinged at the bottom edge instead of at the top, and that there is a diagonal slot between the wing and flap that comes into play as the flaps are lowered..." 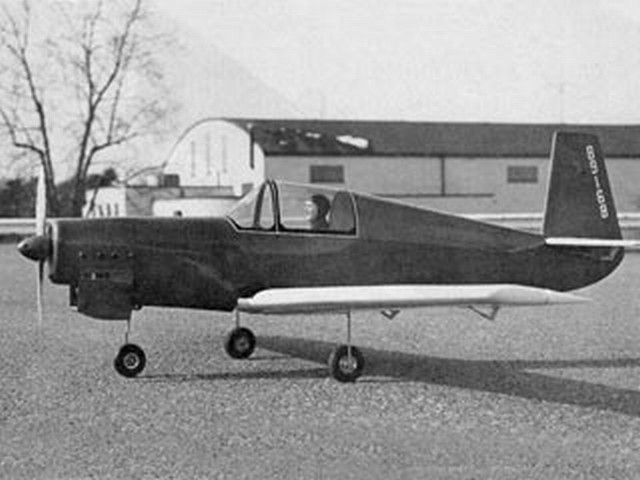