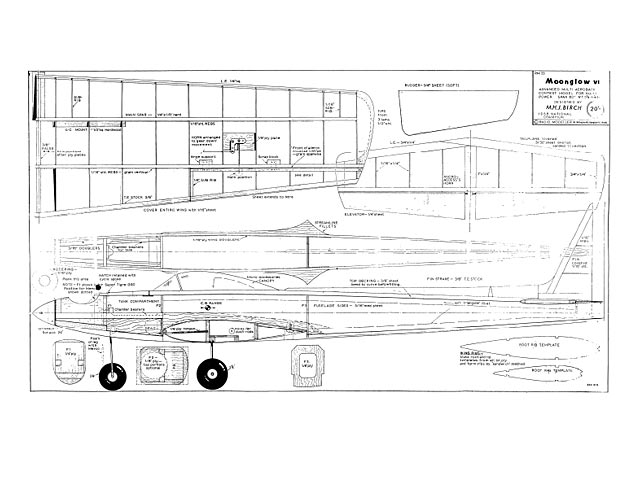 Quote: "A really winning design! Performance limited only by the ability of the pilot. Moonglow VI, by Mike Birch.

THE first thing I invariably turn to, on the arrival of the latest issue of RM, is the write-up on the featured multi or scale modes, because I probably derive more pleasure from reading the story of such models' development, than from any other aspect of R/C modelling. Now, as I suspect I am not alone in this, I'm going to give you some background on 'The Moonglow story'

If we go back about two years - and seven or eight models - we reach the Birch pre-Moonglow era, and find ourselves with a Thor (oz5195), which was really the very start of the line, as it was the first low-wing R/C model I ever flew. This was powered with a Super Tigre .56, steered with an ancient set or reed gear-and weighed 8-1/2 lb. After something like a dozen flights, I planted it in about a foot of very firm Mother Earth.

As the balsa in the fuselage had not sprouted any new shoots by the time I reached the scene, the remains were taken home and stripped down. The wing, which was covered with nylon and painted with cellulose, now had a finish reminiscent of rather fine crazy paving, but was, nevertheless, practically intact. A battered old Falcon 56 (oz2424) tailplane was recovered and pressed into service on a new fuselage, together with a Taurus (oz612) type fin and rubber.

This then, was the first Moonglow, It lasted comparitiyely well, flying for about three months, with newly purchased F & M proportional. Performance was, perhaps, not quite all that it might have been and, on reflection, I have a sneaking feeling that the 3 lb wing may just possibly have been a contributory factor in this.

The next four Moonglows were all built with the Thor wing planform, but with a symmetrical section - which was actually two 'top halves' of the original Thor semi-symmetrical section - and, apart from thinning it somewhat, modifying the entry and the maximum-thickness position, this is the section I still use.

The Mk VI Moonglow I am currently flying has now evolved further, so as to have a different wing planform and a much longer fuselage, as well as an entirely new tail unit. All of which has hidden the Thor points, completelyl The section used on the 'VI' is the modded one I mentioned, with the maximum depth point at the tip brought forward from about 45 per cent to around the 25 per cent mark, which allows the wing tips to stall after the root. This being so, the model may be throttled back and flown on full up-elevator and, unless rudder is applied, it simply will not drop a wing tip. However, when rudder is pushed in, the model will spin easily and reliably, and all that's required to stop it is to neutralise the rudder.

The wing, which at 15 per cent is quite thick, prevents the model being a 'bomb' but, because it can be built at 5-1/4 to 5-3/4 lb, its rate of climb is very good. The long moment arm gives really smooth manoeuvers and, of course, the rather massive rudder makes the double stall-turn one of the easier ones! The 'VI' performs virtually identically upright or inverted,. The ailerons are hinged at the centre, with no differential, and rolls are pleasingly axial..." 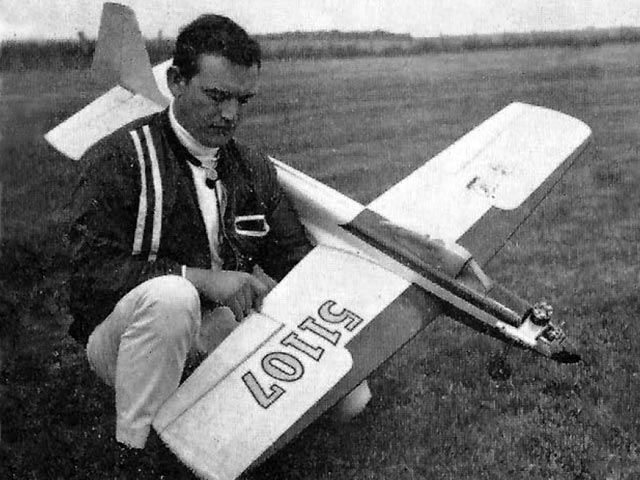