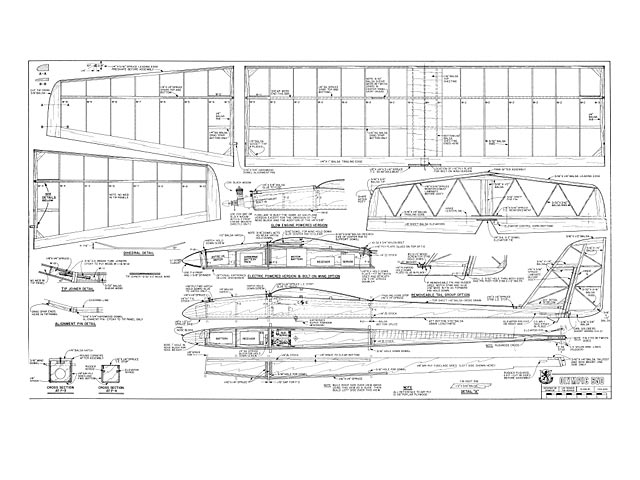 Quote: "The Olympic 650 is a high performance sailplane featuring easy assembly and convenient size. The design was developed with the novice in mind, with a simple to build and rugged structure and forgiving characteristics. The Olypic 650 is quite stable and is recommended for those with no experience with R/C models.

The structure or the Olympic 650 is quite similar to that of the Olympic II (oz5116), and has proven to be strong enough to survive poor landings and to be easily repairable in the event of a crash. The three piece wing design employs a one piece center section which is virtually indestructible, while the plug in tips serve to make the wing easily transportable even in small cars. In fact, when built with the removeable tail option, the entire airplane can be transported in a box measuring 4 x 14 x 40 inches.

The fuselage is a simple slab-sided box which utilises 1/8 air-ply sides and floor for strength and light weight. The tail is a straight forward anti-warp structure with separate control surfaces for simplicity. Details are shown for glow and electric powered versions. The Olympic 550 performs well with either or these power systems, but the Simpler sailplane version is recommended for the novice.

Construction Notes. To build the airplane you will need a flat work surface at least 11 in wide and 48 in long, into which you can push pins. A sheet of Celotex or similar composition board material, works well. Whatever you use, be sure that it is straight and unwarped.

Construction. A few simple tools will also be needed. These include a model knife and/or a supply of single edge razor blades, a razor saw, pliers, a small hammer and a hand drill and drills. You will also need hardwood sanding blocks and assorted grades of sandpaper, a small block or razor plane, a supply of straight or tee-pins and masking tape.

The types of adhesives used are a matter of personal choice but we don't recommend normal model airplane cement. For general construction, we suggest the use of aliphatic resin glue such as Wilhold or Titebond..."

Update 08/08/2016: Replaced this plan with a better version which includes missing 2nd sheet showing formers, thanks to Don. 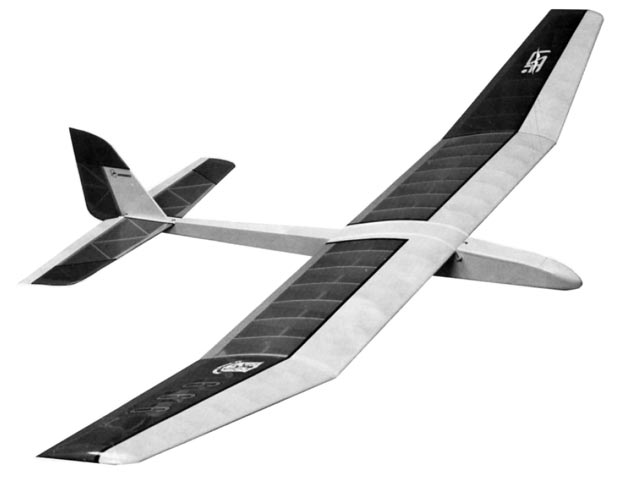 The Olympic 650 features in Al Doig's 'Sailplane and Soaring Manual', available on the companion RCLibrary site: http://www.rclibrary.co.uk/title_details.asp?ID=1062
Marty - 17/11/2015
Good point. I never really registered this. The book is a completely not to say astonishingly detailed manual for the Olympic 650 containing about 60 pages (including many photos) on how to build, cover and set up this model. Includes everything down to itemised list of materials. Also alternative power setups. Then onto flight theory.
SteveWMD - 08/08/2016
Hey Steve, Here are a few pics of the Olympic 650 I've recently completed [see morepics 007-009]. Thanks for a great website!
MikeB - 26/08/2016
Added two photos of the completed model, thanks to Davide [more pics 010, 011].
Mary - 07/05/2018
Hi Steve and Mary, Hope everything is fine with you and your loved ones! Every now and then I look at the site, at “new” models, and more than once I fall in love with one.
But with a lot to build on the shelve I hardly come around to share pictures.
Then again this one I want to share! An Oly 650 [pic 012]. Nice to build, handtosses are fine, just waiting for fair weather to put her on a hi-start. And being dutch the red-white-blue is becoming a standard to me!
Regards,
ErikP - 26/10/2020
Add a comment