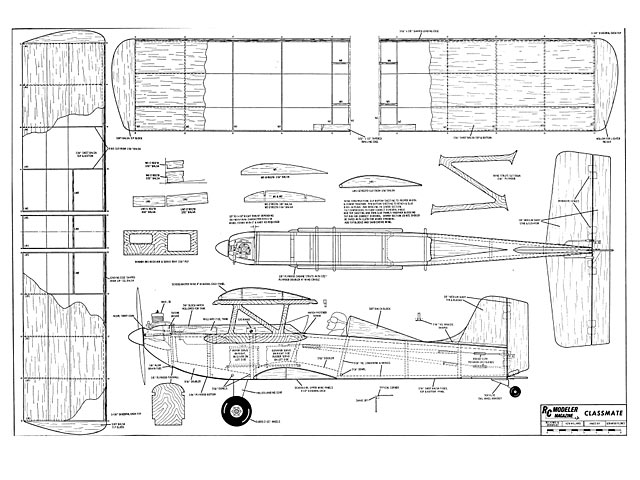 Classmate. Biplane for 3 channel RC and .10 power with wingspan 39in.

Quote: "A classic, unequal span sport Biplane reminiscent of aviation's yesteryear. Strictly a fun job, you're not likely to win any contest with the Classmate. By Ken Willard.

What happens if a Schoolmaster (oz7534) spends a lot of time in a workshop with a sophisticated Schoolgirl (oz816)? Well they find they have many things in common - they both like to fly, they've both been around for a while, they both like Cox's Red Label better than Johnny Walker's, and their MonoKote matches. So what else? They get married - and not long afterwards they produce a little Classmate!

And that's just how the Classmate was born. You see, I built the Sophisticated Schoolgirl for the specific purpose of showing how the Bonner 4RS would fit into a standard 1/2A kit, and the combination was first shown at the Toledo Conference in 1967. After the show, I brought the Schoolgirl back home, flew her a few times more, and then went on to another design. The Schoolgirl hung on the wall, with the wing setting on top of some others on my wing rack.

At the time I was doing some experimenting with test samples of SuperMono-Kate, and in the process I covered the old prototype Schoolmaster wing with it. It turned out very well, and I thought Gee, I ought to put another Schoolmaster together, now that I've got this wing looking so good. But I had other projects going, so started to put the wing up on the wing rack.

Any biplane fan knows what happened next. As I started to put the wing on the rack, it momentarily was just the right height above the Schoolgirl wing to yield a biplane configuration - and that's all it took! There I was, with two readybuilt wings, perfectly matched for a classic, unequal span, sport biplane. You all know the bit - I love biplanes, but I hate to have to build two wings. Also, in the scrap box, I had the old original sheet stab from an earlier Schoolmaster (I never throw anything away) so that all that I needed was a fuselage.

So, out with the sketch pad, and in a short time I had a simple box fuselage designed around the wing combination. It looked good, so I made a small chuck glider version, with which I checked out the stability characteristics, varying the CG, and also placing the stab first on top of the fuselage, then on the bottom. In the latter configuration the glider would fly satisfactorily with the CG ranging from 25% to 40% of the chord, so I decided once again to put the stab on the bottom, since it should make it easier to trim out for sport flying.

And that's how the Classmate was designed. That is, insofar as general layout is concerned. Next came the detail design - and as usual, I wanted to keep the detail as simple as possible. One of the areas in open cockpit biplanes where detail design can get complicated is the cabane structure, which has been called the 'birdcage' by many people for that very reason. You can't get a much more simple structure than the Classmate has - two 'N' struts, cut from one piece of 1/8 plywood each, and integral with the mounting base which glues to the side of the fuselage, and also integral with the wing cradle on which the wing rests. A 3/32 plywood doubler, with the grain running chordwise fore and aft, is added at the wing cradle for strength. The cabane units are sanded so the struts are streamlined, and the edge of the base
is sanded to fair into the side of the fuselage.

Another simplifying feature is the one piece balsa block hatch. You could make it slightly lighter by building-up a sheet and former with stringer type structure, but if you use a medium grade of balsa block, the weight saving isn't worth it. Same thing is true of the headrest.

It should be obvious to you by now that these simplifying features cost a little more, both in money and weight, so if you want to take the time to make slightly more complicated structures and save a little money and weight, go ahead. While you're at it, you could also make built up wings and save even more. In my own case, I became so intrigued with the design that I couldn't wait, and took the fastest way possible to get the model ready to fly. I will say this - if you do lighten the structure it'll make the model perform a little better with the Max. 10 - and for those of you who don't, and feel that the performance is a little sluggish with the Max. 10, there's room enough up front for a Max. 15 - and you'd better be ready for it!

The Classmate is strictly a fun job. Like the full size airplanes of the era in which that type of design was popular, its not overpowered - you have to dive it a little to get up speed for maneouvres. Then it does them at almost scale speed. You're not likely to win any contests with the Classmate, other than maybe a spot landing or limbo, or similar type club contest, but you'll enjoy the realistic take-offs and the scale like flying qualities. The spectators like it too. So build one, and see for yourself.

Article scan thanks to RFJ. 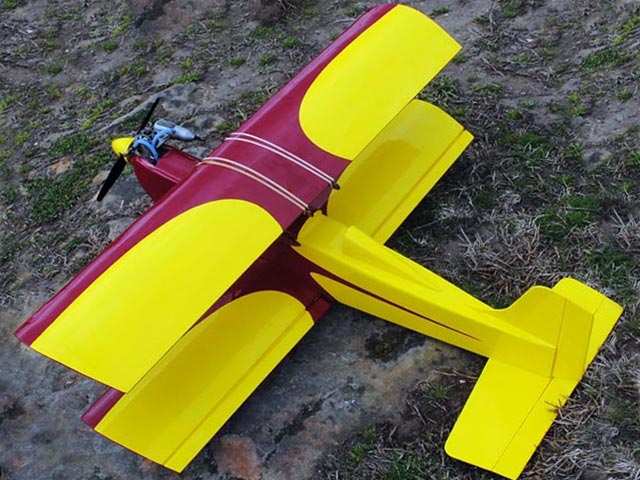 Starting with the PDF from Outerzone I made a laser-cut kit and built a Classmate. Instead of printing the plans I used my drawing software to measure the locations of the ribs and the fuselage formers, which I then marked on the wing skins and fuselage sides. I made several modifications on my model. I like spars in my wings, so I added 1/8" square spruce spars on top and bottom of both wings. The top wing has zero dihedral. The bottom wing has ailerons and is attached with bolts. The top deck is built with 3/32" sheet with no hatch, instead of the carved block hatch shown on the plan. I think it's rather excessively nose heavy as shown on the plan, though. I didn't like the CG suggestion, so I started by balancing it more than a quarter inch aft of the location specified, and it still takes a fair amount of up trim to fly and the nose drops when the throttle is cut. I'm going to move the battery a couple of inches aft and try it again. Other than being nose heavy it flies extremely well, and I recommend it to anybody who wants a relatively easy project that is highly customizable. My plane is powered by an OS 15 FP. The fuel tank is quite low compared to the engine, so don't use an engine with poor fuel draw. I'm attaching some photos of my plane [more pics 004-007].
RobReynolds - 29/03/2016
Add a comment