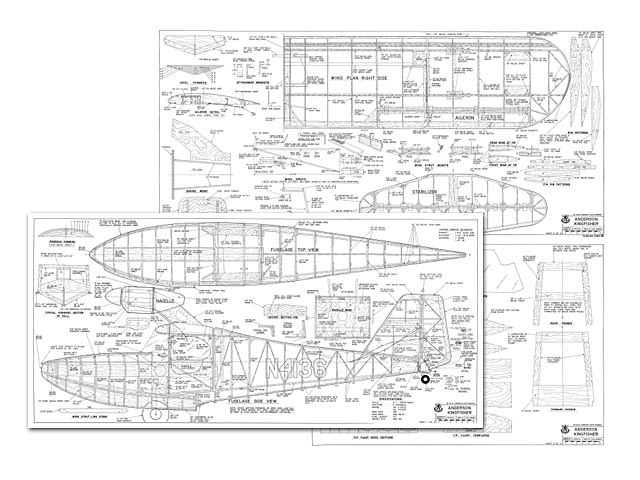 Quote: "A 1/4 scale reproduction of a beautiful amphibian. Flies in a 'Cub-like' fashion. By Dennis Tapsfield.

The prototype Anderson Kingfisher was designed and built by Earl Anderson (a Boeing 747 Captain). It took him nine years to complete, and he made the first flight in April 1969. Interestingly, standard Piper Cub wings are used; drawings for the full size aircraft are available, and there are probably around fifteen of the aircraft flying at the present time in various parts of the world. Richard Warner, of Warner Aviation (who sell the full size plans) was very helpful, supplying photos and drawings from which the model was built.

My model is built to 1/4 scale, weighs in at around 16 lbs, and is powered by a Super Tigre 90 2-stroke. The layout of the aircraft is unusual, the engine being forward of the wing, with the tractor propeller rotating in front of the windscreen. This not only serves to lower the Centre of Gravity, but brings it forward, reducing the need for the weight in the nose. However, the hull is more heavily built in the nose to further offset the need for the nose weight. Do try to keep the tail end light.

The model flies in a 'Cub-like' fashion, as one might expect. If you feel that you would like to build this unusual and versatile amphibian, I suggest that you start with the wings, then sort of graduate into the hull.

Construction. Note: Be sure to use a waterproof glue for building this model.

Wings: Perhaps the first things to make should be the laminated wing tips. First decide on what material you intend to use and this will tell you the thickness of the completed tip, so that you can place a series of pins around what will be the inside of the tip. Using a waterproof white glue, join the laminations together and, while wet, gently wrap the tip around the pins, inserting pins on the outside as you go, and leave the whole thing to set. Make two.

Cut the plywood root ribs and the centre section ribs. These should be drilled in a pack for the 1/2 in dia tubes at the same time as the wing root ribs to ensure the correct alignment. Be sure to allow for the dihedral angle in each of the ply root ribs on both wings, as they will have to be staggered for drilling. When cutting the rest of the ribs from balsa, it is probably best to use a template cut from 1/16 ply to ensure consistency.

The wing can be built over the plan in the usual way, but will have to be removed for sheeting, completing the spar tips, adding the tips proper, and then the spar webbing. Make the strut brackets at this time..." 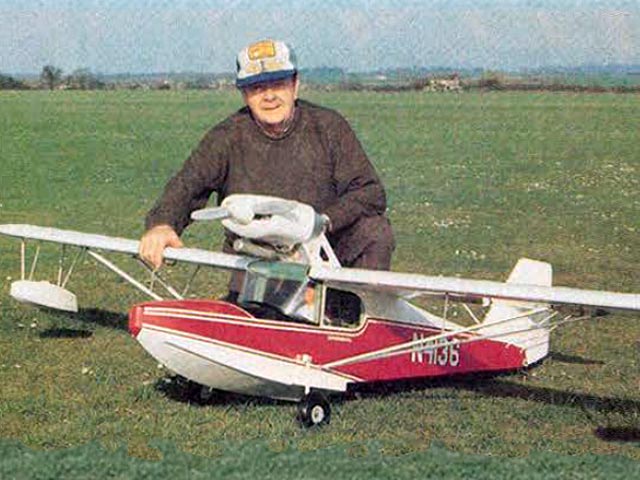